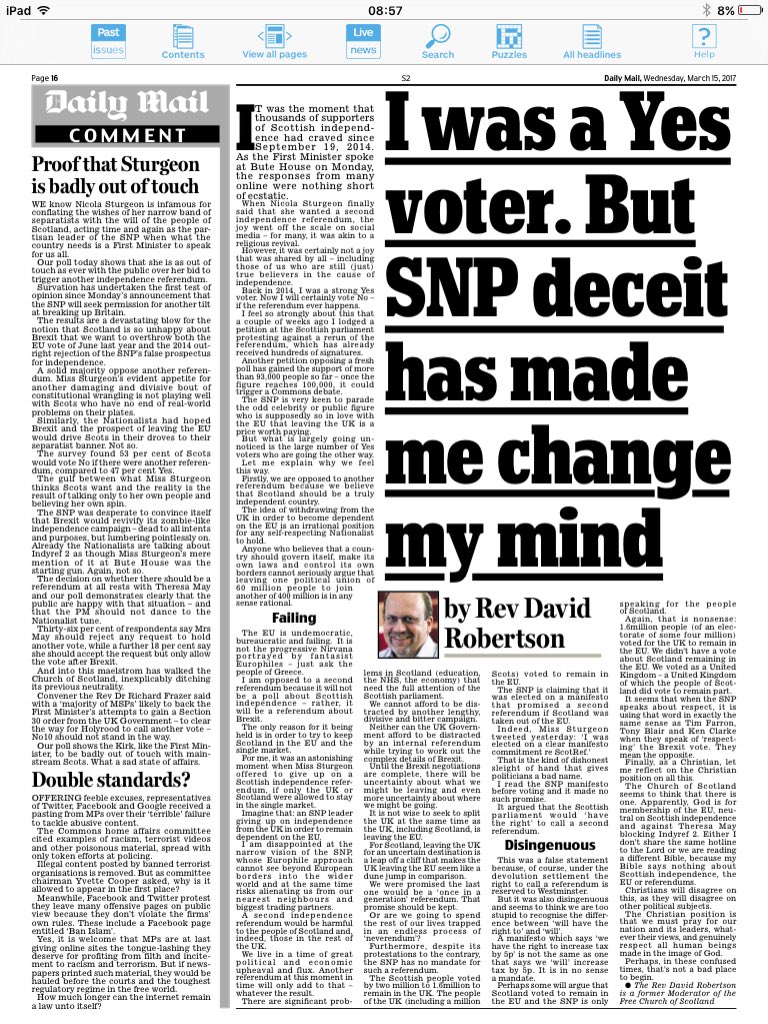 Trigger warning:  This is another article about Scottish Independence and Brexit.

Comfort warning:   I suspect to many peoples relief, I don’t intend to post much more about Indy Ref 2 and Brexit (I can’t promise nothing!) but to be honest I’ve said enough and I’ve other things to get on with.  Unless there is something new and some actual debate I don’t really see any point in being involved in the endless sloganeering and soundbites.  Its already doing my head in!    I regard IndyRef2 as a supreme waste of time for the government and a complete distraction – and I very much doubt it will happen for several years, if at all.  If May is who I think she is, then she will not permit it until after Brexit and if the SNP continue their current trajectory they will lose the almost absolute power they have in the Scottish parliament.  But even if the opposite happens and Scotland ends up out of the UK and out of the EU, and then back in the EU, I don’t intend to waste my time speculating any more, or just adding fuel to the fire.   There is enough division as it is.  For the moment I leave you with my article in Todays Daily Mail which explains why I will be voting No.  I think I’ll emigrate for the next five years!   The headline is not mine and the full text of the article is below:

When Yes means No

You could sense the excitement. As our First Minister spoke and thousands signed into the live feed, the responses were ecstatic. “I’m so excited….go on say it….Yesssssss”. And when Nicola finally said that she wanted a second Independence Referendum in 2018/19 the joy went off the scale. It was like a religious revival.

However it was not a joy that was shared by all – including those of us who are still (just) true believers in the cause of independence. I was a strong Yes voter and now I will certainly vote No – if the referendum ever happens. I feel so strongly about this that a couple of weeks ago I placed a petition in the Scottish Parliament petitions committee that has already received hundreds of signatures.

The SNP are very keen to parade the odd celebrity who is so in love with the EU that leaving the UK is a price worth paying. But what is largely going unnoticed are the large numbers of yes voters who are going the other way. Let me explain why we feel this way.

Firstly we are opposed to this because we believe that Scotland should be an independent country. The idea of withdrawing from the UK in order to become dependent on the EU is an irrational position for any self-respecting nationalist to hold. Any one who believes that a country should govern itself, make its own laws and control its own borders cannot seriously argue that leaving one political union of 60 million people, to join another of 400 million, is in any sense rational. The EU is undemocratic, bureaucratic and failing. It is not the progressive nirvana that the fantasists of the Europhiles keep telling us. Just ask the people of Greece!

I am opposed to a second referendum because it is not a referendum about Scottish independence but rather a referendum about Brexit. The only reason for it being held is in order to try and keep Scotland in the EU and the Single Market. For me it was an astonishing moment when Nicola Sturgeon offered to give up on a Scottish Independence referendum, if only the UK or Scotland were allowed to stay in the Single Market. Imagine that. An SNP leader giving up on independence from the UK in order to remain dependent in the EU! I am disappointed at the narrow vision of the SNP whose Europhile approach cannot see beyond European borders into the wider world and at the same time risks alienating us from our nearest neighbours and biggest trading partners.

A second independence referendum will be harmful to the people of Scotland and indeed those in the rest of the United Kingdom. We live in a time of great political and economic upheaval and flux. Another referendum at this moment in time will only add to that. Whatever the result. There are significant problems within Scotland (education, the NHS, the economy) that need the full attention of the Scottish parliament. We cannot afford to be distracted by another lengthy, divisive and bitter campaign. Neither can the UK government afford to be distracted by an internal referendum whilst trying to work out the complex details of Brexit. Until the Brexit negotiations are complete there will be both uncertainty about what we might be leaving, and even more uncertainty about where we might be going.

We were promised that this would be a once in a generation referendum. That promise should be kept. Or are we going to spend the rest of our lifes on a Neverendum?

Furthermore, despite their protestations to the contrary, the SNP have no mandate for such a referendum. SNP MP Tommy Shepherd declared on the BBC yesterday that this was not a referendum about Brexit but rather one about ‘respect’. But the SNP does not have a good record on respect for the votes of the people. The Scottish people voted by 2 million to 1.6 million to remain in the UK. And the people of the UK (Including 1.1 million Scots) voted to leave the EU. The SNP are claiming that they were elected on a manifesto that promised a second referendum if Scotland were taken out of the EU. Indeed Nicola Sturgeon tweeted this yesterday “I was elected on a clear manifesto commitment re ScotRef”. That is the kind of dishonest sleight of hand that gives politicians a bad name. I read the SNP manifesto before voting and it made no such promise. It argued that the Scottish Parliament would ‘have the right’ to call a second referendum. This was a false statement because of course under the devolution settlement the right to call a referendum is reserved to Westminster. But it was also disingenuous and seems to think that we are too stupid to recognize the difference between ‘will have the right to’ and ‘will’. A manifesto which says ‘we have the right to increase tax by 5p’ is not the same as one that says we ‘will’ increase tax by 5p. It is in no sense a mandate.

But perhaps some will argue that Scotland voted to remain in the EU and the SNP are just speaking for the people of Scotland. But again that is non-sense. 1.6 million people (out of an electorate of over 4 million) voted for the UK to remain in the EU. We didn’t have a vote about Scotland and the EU. We voted as a United Kingdom – a United Kingdom which the people of Scotland did vote to remain part of. It seems that when the SNP speak about respect they are using that word in exactly the same sense as Tim Farron, Tony Blair and Ken Clarke use it when they speak of ‘respecting’ the Brexit vote. They mean the opposite.

Finally as a Christian let me reflect on the Christian position on all this. The Church of Scotland seems to think that there is one. Apparently God is for membership of the EU, neutral on Scottish independence and against Teresa May blocking IndyRef2. Either I don’t share the same hotline to the Lord or we are reading a different bible, because my bible says nothing about Scottish independence, the EU or referendums. Christians will disagree on this, as they will disagree on other political subjects. The Christian position is that we must pray for our nation and its leaders, whatever their views and genuinely respect all human beings made in the image of God. Perhaps in these confused times that’s not a bad place to begin! I’m off to pray for Nicola, Teresa, Ruth, Jeremy, Tim, Willie and St Patrick!