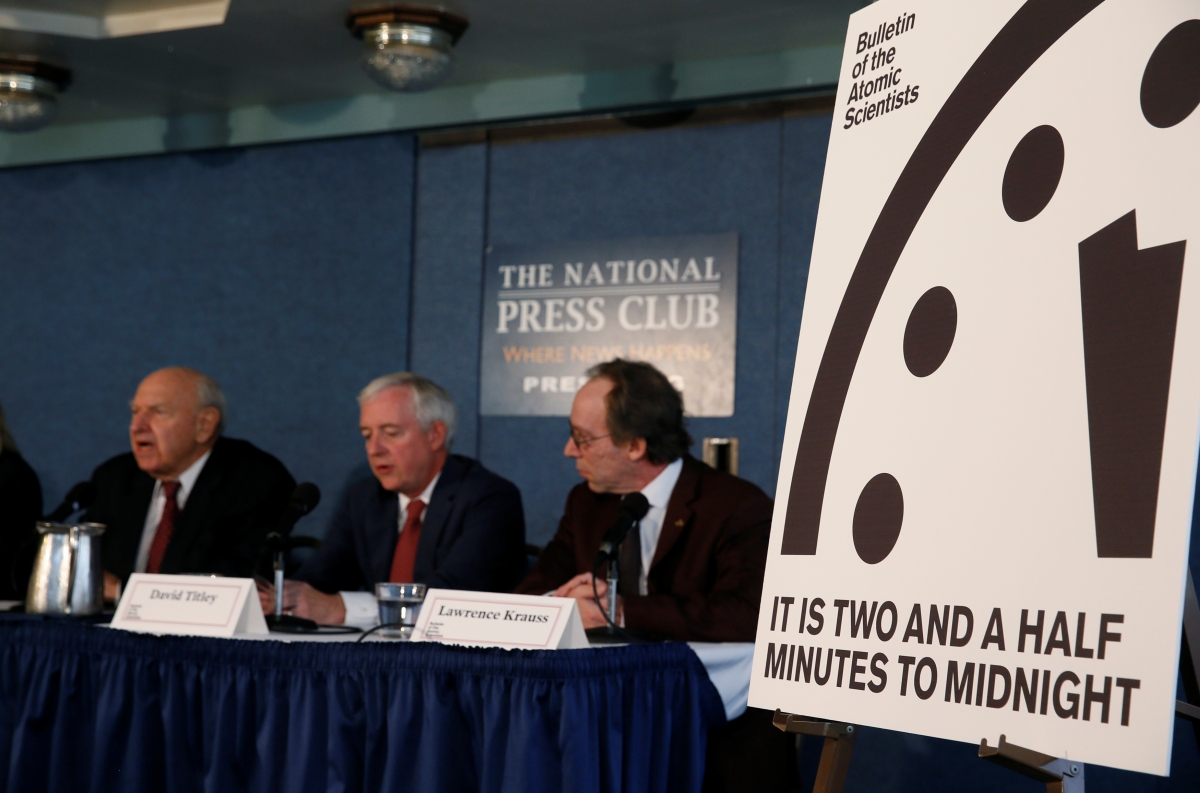 As Doomsday Draws Near And The Devil Seeks To Swallow Us Up, The Only Answer Is In Jesus

“Bulletin of the Atomic Scientists” board members Thomas Pickering, David Titley and chairman Lawrence Krauss revealed that the minute hand of their “Doomsday Clock” has been moved forward by 30 seconds to a more ominous 2-1/2 minutes from midnight.Reuters

‘The End of the World is Nigh!’

That used to be the sign that eccentric street preachers carried as they paraded on the high street. You don’t see that much nowadays, except in comedy shows, but it seems as though their doom and gloom mantle has been taken up in the collective hysteria following Brexit and Trump.

The latest example of this is the Doomsday clock, which represents a countdown to a possible global doomsday scenario. Last week we were told that it had moved 30 seconds nearer to midnight due to the “rise of strident nationalism”. We are now apparently only two-and-a-half minutes away.

That this was treated as a fact and solemnly reported on by the news outlets reminds us how far down the fake news and alternative facts route we have come.  The same media that attacks Trump and others for making things up, lauds a group of “experts” who treat as a “fact” the moving of an imaginary hand on an imaginary clock towards an imaginary apocalypse.

Going back to the real Apocalypse, the Greek word for Revelation, we come on this week to one of the most challenging and difficult passages to understand in the whole bible – Revelation chapter 12.

The story portrayed in this picture is of woman giving birth, being attacked by a dragon and a great battle following the birth of her son. It is an image that would have resonated with many. The Greeks and Romans would have seen the woman as a Goddess surrounded by the twelve signs of the Zodiac. But John and the Jewish people would have understood her as Mother Zion who gives birth to the Messiah.

There is a wonderful book, The Great Christ Comet by the Northern Irish writer, Colin R Nicholl, that I have found really helpful. It explains in some detail and very convincingly that this chapter is about the star of Bethlehem and the fulfillment of the prophecy of Balaam in Numbers.

The child is the one who will rule the nations, so the devil wants to destroy him because he considers himself the ruler of the nations. There is war between the devil and his angels and the great dragon, Satan, is hurled down.

And then comes the song of victory, similar to that of chapter five. The devil is defeated, as Jesus had promised to John – John 12:31-32: “Now is the time for judgment on this world; now the prince of this world will be driven out. And I, when I am lifted up from the earth, will draw all people to myself.”

God’s people triumph over the devil by the blood of the Lamb.

Not being able to get the Lord, the evil one now turns to the Lords people. Like a roaring lion he goes around seeking whom he may devour and his fury is great. Again in this picture the woman is given the two wings of a great eagle (think Lord of the Rings) and escapes into the desert where the sea monster cannot get her. He tries to overwhelm her with a flood but instead of it swallowing her, the earth swallows the river. But the battle is not yet over – as we will see in the next chapter.

Apart from sounding like an early version of a Hollywood action sci-fi movie, what does all this mean for us today? It is essential that we allow the bible to interpret itself and we don’t use our current zeitgeist to interpret the bible.

The meaning of Revelation 12 is the same as the whole message of the Bible. The evil that we face is far greater than that prophesied by the doom and gloom merchants of the Doomsday Clock. The darkness is much darker. There are forces at work in this world that are way beyond all the rulers of this world, no matter how malevolent and powerful in our eyes. But there is a greater power. The Light that overcomes the darkness. We need and receive Amazing Grace.

John Newton writing to a politician of his day talks about how when reading history he was always reminded that it serves as a great illustration of the Scriptural truth that humanity is depraved. I remember being challenged in a bookstore in Cambridge after giving a talk there. “David, you seem very reasonable, but you have a dreadful view of humanity – what is your proof that humanity is rotten at the core?” The answer was simple. I gestured to the history section and suggested that my questioner could pick out any book in that section as proof.

Newton goes on to say that the history of mankind in any age demonstrates chaos, “a detail of wickedness and misery to make us tremble, and a confused jumble of interfering incidents, as destitute of stability, connexion, or order, as the clouds which fly over our heads.” He quotes the Latin proverb:

“The kings go mad and it is the Greeks, their subjects, who are punished”.

In that same letter, written in 1777, Newton makes a remark that I find apposite for today: “A great man to his own way of thinking is not one man all by himself.  He is a man surrounded by all those who serve him, and who imagines that he has as many hands as all of them put together, because he has the use and control of them.  An army general thinks of himself as standing in the midst of all his soldiers.  In this way each man tries in his imagination to occupy the greatest possible space, and everyone promotes himself and inflates his own importance in the world in order to enhance his own self-image. That is the goal of all the schemes made by ambitious men. “

But Revelation 12 tells us that there is one who is the King of kings and the Lord of lords. The one who does have the history of the world in his hands. This is the key to avoid the kind of doom and gloom that all sides of the culture war seem to indulge in. Instead of reading the bible through the eyes of history and contemporary politics, the Christian has the great advantage of being able to read history and contemporary politics through the eyes of the Bible.  In effect, our current cultural and political commentators are like those who are looking through a telescope the wrong way round.  Maybe its time we all got a sense of perspective?

The devil seeks to destroy and swallow us up. I have been thinking on that this week with the tragic death of two friends. Death appears to be the ultimate victor, the total destroyer, and the last word. But the Bible’s answer is stunning.

“When the perishable has been clothed with the imperishable, and the mortal with immortality, then the saying that is written will come true: ‘Death has been swallowed up in victory.’

“The sting of death is sin and the power of sin is the law. But thanks be to God. He gives us the victory through our Lord Jesus Christ.” (1 Corinthians 15:54-57).

Rev David Robertson is minister of St Peters, Dundee and Associate director of the Solas Centre for Public Christianity. He is on Twitter @TheWeeFlea.  ‘Revelation 12 – The End of the World is Nigh’ is the second article in his Revelation series for Christian Today.

Why Our Witness Must Be Credible – Revelation 11