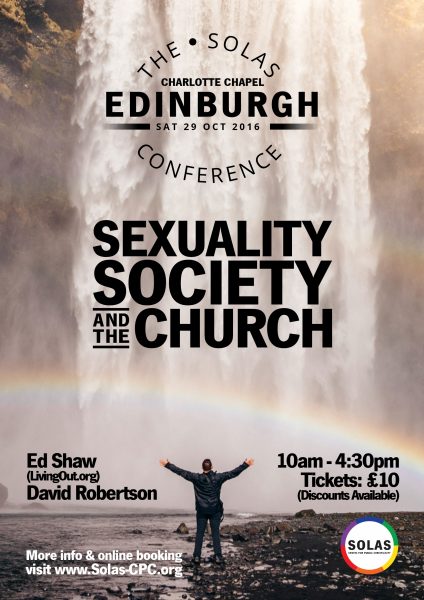 This is an adapted and expanded series based on my talk at the  Solas Conference Edinburgh – 29th October 2016.   It is a subject of massive importance for the Church and society.  I have split my paper up into several sections and will be putting one out every Monday.

As we talk about this subject we need to realise that we are dealing with individual stories. This is not theory.  This is not political ideology.  We are talking about real people.  Last week I watched a BBC Scotland programme about individuals who were transgender.  It was one of the saddest and most depressing things I had seen for a long time.  Human  beings made in the image of God, confused, hurting and being offered a solution based on falsehood and a fantasy.

These issues are very much part of society today – as they have been in different forms throughout human history.  I think of Jane (note – the names used are are of course general) who thinks she is a boy trapped in a girls body; John who was bullied at school and who now wants to marry his boyfriend; Susan who finds that she is attracted to other women but for some reason feels guilty about it.  Everyone’s story is different and yet everyone’s story fits into a bigger picture.

The Freedom of Love and the Repression of Humanity

For many people in our culture the bigger picture the narrative that 21st century liberal humanism teaches.  This is the narrative that is predominant in education at all levels, in the secular media and amongst most politicians.  It is taught as fact, although in reality it is a big picture story that does not really fit the facts.

Let me give one example.   Diarmid MacCulloch recently had a three-part series on BBC2 entitled On Sex and the Church.    “I think religion has got everything appallingly wrong and it has been terrible for us in sexual terms,”. The basic resume of his position is that before Christianity came on the scene sex was a pleasure which people enjoyed in the Greco-Roman pagan paradise. But then along came Christianity, and especially St Paul and then Augustine, and lo and behold sexual repression entered into Western society. It has taken many hundreds of years, but now finally after the Enlightenment we are returning to those wonderful golden days. The only barrier remaining in the way is repressive religion, especially that of the Calvinists and the Catholics. In our brave new world people should be free to sleep with whoever they want, whenever they want. After all sex is just an appetite like eating. What’s wrong with having a smorgasbord of love? As long as we don’t harm anyone what’s the problem?

But there is another big picture. One which, for the moment, we are still allowed to teach. One upon which the whole of our society has been based. We are currently in the process of rejecting that picture, but maybe we should stop and consider. Maybe we are not heading to a secular sexual nirvana? Maybe we are heading into the pit of hell?

What is Humanity?   Psalm 8

You have set your glory

you have established a stronghold against your enemies,

to silence the foe and the avenger.

the work of your fingers,

the moon and the stars,

which you have set in place,

human beings that you care for them?

The Shorter Catechism sums up the biblical teaching nicely.

a) Gender – we are created male and female

b) Identity – our identity is found in God.

c) Marriage – we are created for one another.

d)  Society – we serve God, and one another by following the maker’s instructions.

But then things go wrong.  The Fall of humanity described in Genesis has an enormous impact.  The fallout is considerable affecting the environment, society and our relationship with one another and with God.  It disturbs, disrupts and destroys our most basic relationships.

The basic difference between humanity before the fall and humanity after, is that before the fall we lived to do the will of God, after the fall we are autonomous and seek to be as God. We do it our way. We go our own way. We are as gods – determining our own right and wrong. At least that was the promise of the devil. Autonomy is at the root of all our troubles.  And autonomy is what our society demands and celebrates:

And now, the end is near
And so I face the final curtain
My friend, I’ll say it clear
I’ll state my case, of which I’m certain
I’ve lived a life that’s full
I’ve traveled each and every highway
But more, much more than this
I did it my way (Sinatra).

Sin is rebellion against God and an assertion of our own sovereignty and authority. No Christian with any biblical understanding would ever say – its my body and I’ll do with it what I want!

The secular humanist world view takes what humanists would like to be true today and interpret the past through that limited and fanciful view.  The Christian worldview interprets the present through the eyes of the past.   Next week in part two we will see the practical consequences of these world views….