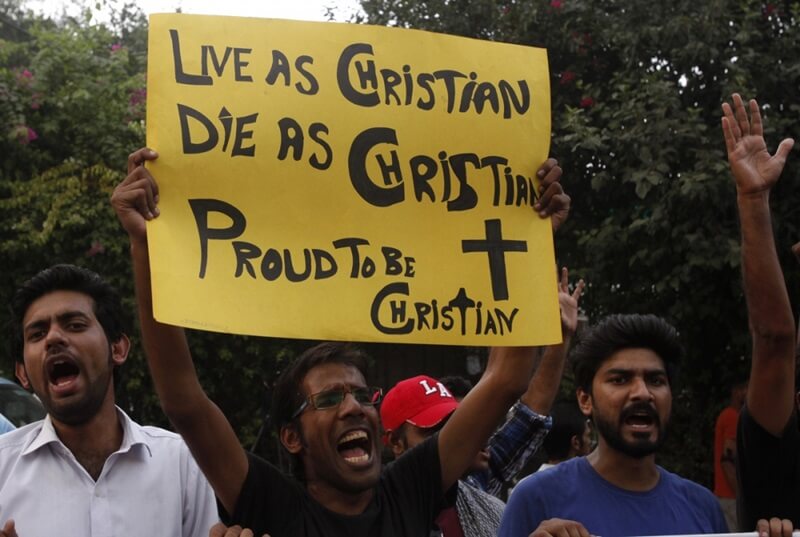 This is the latest Revelation Study on Christian Today

My brother Vijay was severely beaten this June in Jabalpur, India. My sister Shigo was executed in Syria last year. My sister Janani was killed by her mother in Sri Lanka.

My brother Nadeem was beaten and abused in Pakistan because he dared to ask for his wages. My brother Fam Mary Kalaad from Egypt was stabbed repeatedly in the chest in July this year. He died.

Some might think that I belong to a particularly large and unfortunate family. I admit it is large – a multitude which no-one can count – but I deny that we are unfortunate. Because despite the attacks and abuse upon us, my family is greatly blessed. We are of course the Christian family, our brother is the Lord Jesus, our Father the Lord God, and our helper and counsellor the Holy Spirit.

All over the world we are being persecuted, privately, publicly and by governments. In Malaysia a law has just been passed which means that Christian converts from Islam can be detained in a ‘purification centre’ for up to three months. In Nepal, eight Christians were put on trial in July because they gave out a pamphlet about Jesus in a Christian school. In Nigeria the new leader of Boko Haram announced that they will now specifically target Christians only. In China and in Cuba churches are being closed and pastors arrested. The new film Insanity of God gives a moving account of the persecution of Christians throughout the world.

Pakistani Christians shout out their faith in protest against the persecution of their fellow believers.

The prophetic message that was brought to the Church of Smyrna (Revelation 2:8-11) praised the Christians there for their faithfulness in the face of such persecution. Smyrna (modern Izmir) was a large, beautiful, planned city, famous for its medical and science schools. The message that Jesus gave them is the shortest and the warmest of his messages to the churches and yet it is also a warning.

What I find wonderful about this is that one of the most famous martyrs in the early Church could well have been sitting there when this letter was read in public (as Revelation was designed to be). Polycarp, who became the bishop/pastor of Smyrna, was martyred in AD 160. He was described as ‘the teacher of Asia, the father of the Christians, the puller down of our gods, who teaches numbers not to sacrifice or worship”. The Christians were persecuted because they did not go along with the Emperor cult. They faced unemployment, poverty and in some cases death. When he was asked to recant his faith and to swear allegiance to the Roman emperor, Polycarp declared:

“Eighty and six years have I served Him, and He never did me any injury: how then can I blaspheme my King and my Saviour?”

I love the description in the account of Polycarp’s martyrdom: “Now, the blessed Polycarp suffered martyrdom on the second day of the month Xanthicus just begun, the seventh day before the Kalends of May, on the great Sabbath, at the eighth hour. He was taken by Herod, Philip the Trallian being high priest, Statius Quadratus being proconsul, but Jesus Christ being King for ever, to whom be glory, honour, majesty, and an everlasting throne, from generation to generation. Amen.” This is the message of Revelation to the persecuted church then and the fearful Church today. Jesus Christ is King forever!

Centuries later there was another martyrdom in Smyrna. On April 18, 2007, a 46-year-old German missionary and father of three, Tilman Geske, and his Turkish co-worker Necati, were killed by Islamist militants. The then Turkish Interior Ministry gave an official response on TV in which he gloated about the murders: “We hope you have learned your lesson. We do not want Christians here.”

But what about the church in the West? Are we persecuted? There seem to be two schools of thought on this. The first says “Yes, of course” and the second says “Don’t be stupid, of course you/we are not persecuted.” The former exaggerates the discrimination that Christians in the West are increasingly facing, while the latter minimises or justifies it. Is there not a more balanced and realistic perspective?

Consider the following: In Belgium a Roman Catholic care home was fined 6,000 euros because it refused to euthanise a 74 year old woman. In Britain the British Medical Association reported that medical students who were pro-life “have complained of being harassed and discriminated against”. In the US an American Christian dating site agreed to pay $450,000 in damages to a male same-sex couple who claimed they were being discriminated against. Is any of this persecution? Not in the sense that many of our brothers and sisters face, but it is discrimination and discrimination is always the seedbed for more serious persecution.

Jesus warned the Smyrna church about what was going to come. And he warns us. As our society turns away from God and replaces him with an increasingly totalitarian state we will find that that the warning of Christ in verse 16 may well be true for us. The temptation will be to compromise so that we can retain our position in society. Don Carson puts it well:

“In declining times, those who truly speak for God will be taunted and threatened. The pressures to dilute what God says become enormous. Clever exegesis to make the text say what it really doesn’t, selective silence to leave out the painful bits, hermeneutical cleverness to remove the bite and sting of Scripture, all become de rigueur, so that we can still be accepted and even admired.”

Another temptation will be to fight back with the weapons of the world. We might regard ourselves as an embattled and persecuted group who have to fight for our rights. That is the wrong approach. Richard Bauckham in his book on the theology of Revelation points out: “It is not simply because Rome persecutes Christians that Christians must oppose Rome. Rather it is because Christians must dissociate themselves from the evil of the Roman system that they are likely to suffer persecution”. In other words, we are most likely to be persecuted, not because we are Christians, but because we critique and don’t buy into the cultural, economic and social norms of our society.

“It is not simply because Rome persecutes Christians that Christians must oppose Rome. Rather it is because Christians must dissociate themselves from the evil of the Roman system that they are likely to suffer persecution”.

The only way to resist these temptations and to be victorious is to be faithful, hear what the Spirit says to the churches and not to fear. We can resist and challenge the systems of this world, not because we have a better system, but because we have faith in the one true God. We don’t rage against the machine. We follow Christ as he renews the whole creation. That is why faith in Christ is the most revolutionary thing that the world has ever seen. No weapon that is fashioned against us can defeat the love of Christ. It’s no wonder that the ‘powers that be’ react so fiercely.

Jesus, as the First and the Last (God), as the one who died and rose again, promises his people ultimate victory. The Phoenix was Smyrna’s symbol because the city had been destroyed and rebuilt. It rose from the ashes. In 2014 a new church opened in Malatya, Smyrna. The gates of hell shall not prevail.

David Robertson is the former moderator of the Free Church of Scotland and director of Solas CPC, Dundee. Follow him on Twitter @theweeflea.