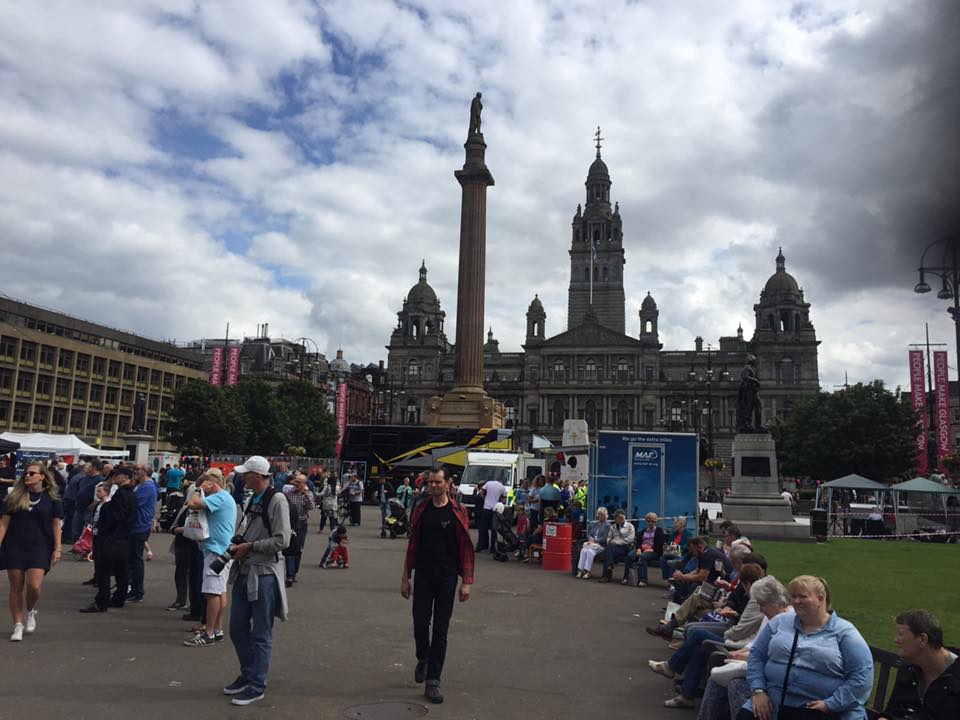 Imagine the scene.  After a visit to a man with cancer, I was walking down Byres road in Glasgow, heading for the subway to travel to speak at Creationfest in George Square.  I was feeling a bit discouraged after a tough week.  I was especially discouraged by a nasty, vicious and lying letter from the Secular Society published in the Dundee Courier, the continued backlash from Stephen Green’s supporters, the continued consiousness of my own weakness and sin – and of course the horribleness of cancer and death.  How do I preach in the open air in George Square?  How can I tell of Christ in ten minutes?  Should I even be doing it?  (the question there is not whether it should be done, but whether I am the person to do it)….

And then...I picked up the Herald newspaper and read this astonishing article from Kevin McKenna.  Remember this is a journalist writing in a secular newspaper.  You can read it and the comments that follow (the usual vitriol and abuse from the secularists – which kind of prove the point of the article – but they havn’t the nous to see that!).  The text of the article is beneath.

The WItchfinder General is Alive and Kicking in 21st Century

The Witchfinder General is Alive and Kicking in 21st Century

During the national debate on our constitutional future two years ago many of us felt Scotland, as a nation, had acquitted itself very well. In the eyes of overseas observers the Scottish independence referendum had set the gold standard for similar campaigns around the globe in the future. During this period I encountered several journalists from foreign publications and each expressed their admiration at how dramatic, yet civilised, the process was turning out to be. These men and women had witnessed almost 90 per cent of the eligible population turning out to vote and marvelled at how many of them had become energised by the process.

For the first time many people, whom politics had left uninterested or with feelings of alienation, felt included. It seemed Scotland’s claim to be an enlightened democracy that valued diversity, equality and fairness was not an over-stated one. Since then Scotland has set more gold standards in implementing equality for our LGBTI community and in welcoming refugees into our midst.

Yet, a feeling persists that many who value progress such as this and have campaigned for it would nonetheless deprive Scotland’s Christian community of similar rights.

Earlier this week it was revealed East Renfrewshire Council was considering asking for “proof of Catholicism” as a key factor in ensuring Catholic children were given priority when their parents sought to enrol them in over-subscribed Catholic schools in the area. Such is the popularity of St Ninian’s Secondary, one of Scotland’s top-performing state schools, thousands of families of all faiths and none have moved into the catchment area in the hope of their children gaining access to it.

Inevitably, this move came under scrutiny in BBC Radio Scotland’s mid-morning phone-in show. The topic for debate was simple: should proof of faith be a factor in children gaining access to a faith school. It soon became clear though, that it wasn’t East Renfrewshire Council’s proposal which was being examined here but the entire existence of Catholic schools in Scotland (they comprise more than 95 per cent of our faith schools).

The theory advanced by several callers to the show that there is no place in a modern, enlightened Scotland “for these schools” is one that has become an emblem for the secular Humanist movement in this country. The ideas of this group are gaining influence in each of our main political parties and indeed dominate the Green Party and the Scottish Liberal Democrats. The movement is implacable in achieving its primary goal of removing all vestiges of the Christian religion from Scottish public life.

Their number one target, as it always has been, is Catholic education and the arguments have changed little over many years. Catholic schools cause sectarianism; they take children away from their childhood friends; if Catholics want them they should be made to pay for them. In smart, enlightened, diverse and inclusive Scotland it seems some are to feel more “included” than others.

We’ll leave aside, for the moment that, not a shred of evidence exists to back the assertion that faith schools encourage sectarianism. Indeed, if such evidence existed, Her Majesty’s Inspectorate of Education would have picked it up. And don’t many parents take their children from state schools to private schools in the course of their schooling? If the secularist lobby don’t want children being taken away from their friends then they should introduce a law forbidding families from ever moving away from a neighbourhood until their children’s schooling has been completed.

Catholic schools, especially those in disadvantaged communities, consistently deliver results above and beyond what would normally be expected of schools operating in such neighbourhoods. Only in Scotland would people seriously consider jettisoning a sector of our education service that gives the country value for money. The rights of parents to have their children educated according to their religious faith is guaranteed by the European Convention on Human Rights

I suspect though, that this isn’t really about Catholic schools at all and that it’s really about seeking to subjugate Christianity in Scotland until it has disappeared underground.

Indeed, in recent years the Catholic hierarchy has had cause to thank the Reverend David Robertson for his outspoken and eloquent defences of Christianity. The Rev Robertson is the irrepressible Moderator of the Free Church of Scotland and has become a hate figure for the secularists. He has an annoying knack of not just preaching the Gospel of Jesus but also of justifying it in a secular and philosophical marketplace.

Previously, secular Scotland was content merely to mock the “Wee Frees” as a religious pantomime act and so their beliefs were indulged. Now they have a leader who is eloquent, charismatic, learned and urbane they must be put back in their box. To silence him his opponents have fallen back on an old favourite: the distortion of language.

Thus Rev Robertson has been denounced as being homophobic, despite there not being a shred of evidence to support this either. Like many other leaders of Christian congregations, when asked, he has stated the common Christian belief that marriage was instituted by Jesus for men and women to be joined together to mirror Jesus’ relationship with His Church and for the pre-creation of children. This is neither homophobic nor hateful, yet Rev Robertson is deemed to be an extremist for espousing this belief.

In smart successful, enlightened and diverse Scotland you’re simply not permitted to utter the phrase: “I believe that, according to my faith, marriage is exclusively a union between a man and a woman.” Nor, it would seem, are you allowed any longer to state your belief unborn children are human beings, for this too is to be dismissed as a controversialist or an extremist. Though it still hasn’t adequately been explained to me quite why defending the human rights of unborn children is “extremist” behaviour.

I don’t intend to get involved in the non-story of the Unionists’ feverish imaginations regarding the fate of Stephen Daisley last week. Mr Daisley is an editor of STV’s online content and an extremely good essayist, whose output has occasionally caused consternation among the SNP and their devotees. Of these there have been very few recently, leading some to think the SNP forced STV to silence him, despite there being not a scintilla of evidence to justify such a claim.

What I found most interesting about this social media spat – and not a little disturbing – was that Mr Daisley’s anti-abortion views were held to be “extremist”. For, in modern Scotland, several reasonable, Christian positions are now deemed to be outrageous and beyond the pale in the new secular, orthodoxy of this country that is supposed to value diversity.
This is the language of the witch-finder general and it is beginning to cast its shadow all over the country. Such though, is life in this one Scotland of many cultures where, it seems, some cultures are held to be less than others.

There are lots of reasons I found this article astonishing.  I’m sure you can work them out….(and I’m not talking about yours truly being called ‘charismatic and urbane’!)….but for me the most astonishing thing is the timing.  I was on my way walking to speak the Gospel in the public square ( and you don’t get much more public in Scotland than George Square), wondering if I should do it, and the Lord send this encouraging token.  You may wonder if I am reading too much into it, but for me it was a real blessing.
As was the whole Creationfest.  I know that for some Christians the notion of a music/skate park/speaking festival in the midst of Scotland’s biggest city sounds twee, American and not something that will reach Scottish people, but I have a different view.  Firstly I am reminded of Moody’s rejoinder to those who complained about his style of evangelism – “you may well be right, but I prefer the way I do evangelism, to the way you don’t”!   Creationfest may not be your cup of tea, but I want to know what is?  What are we doing to reach the lost millions in Scotland’s cities, towns and villages?
I think Creationfest was an excellent public square event because under the wise leadership of Brian Brodersen and Calvary Chapel, it was well organised, all the music I heard was top quality (and I am writing this on the train before hearing the Simon Kennedy Band and Brian Macleod – although I did hear Stephen Henderson another musician from St Peters – changed days that the Free Church was able to provide three participants in this type of event!), the stalls were good and,  although I didn’t partake, I’m sure the skateboarding was fun!.  Futhermore it was free!    It was a tremendous witness.
For me preaching in the open air in today’s society with people walking past with ear phones, always in a hurry to get some where and the constant noise of traffic, is not easy. But when the set up is as good as Creationfest was, it is well worth doing. And of course the Lord’s word will not return to him empty.
I especially enjoyed the seminar in Glasgow City Church (confusingly there are two churches in Glasgow with the same name, but this was the non-Free Church one).  The attendance and response at this seminar only confirmed my view that there are many of the Lord’s people who are frustrated and looking for the church leaderships to provide guidance, training and above all leadership in outreach.
As  I write this on the slow train to Dundee (apparently stopping at every small town in the Central Belt) I can only hope and pray that as the Dundee, Celtic, Aberdeen and Hearts fans all walk past George Square right now (6pm) they would hear the sounds of the Simon Kennedy Band and stop to enquire, what is going on?
I am deeply grateful to those who organised, prayed and worked so hard. May the Lord grant that their labours are not in vain.