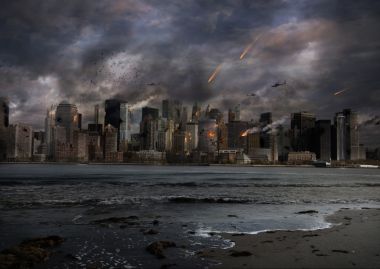 This is my last Apologetics column for Christian Today  I think I have written 25!  Next week I am starting a new series on the book of Revelation!

Tim LaHaye and the end times: What should we believe about the end of the world?

Do we have the correct view of the End Times?

I knocked on the door which was ajar. My friend was not at home and yet a pan was boiling on the hob, the radio was on, and the house gave every appearance of being occupied. The lines from Larry Norman’s I wish we’d all been ready ‘the Son has come and you’ve been left behind’, went through my head. I had not been a Christian long but already the very popular apocalyptic Left Behind genre was part of my life. I even gave a lecture, at the request of my history teacher, on the end of the world – based entirely upon Hal Lindsey’s The Late Great Planet Earth.

All of this came back to mind this week when I heard of the death of Tim La Haye, aged 90. LaHaye, along with Jerry B Jenkins, authored the Left Behind series of books which have sold more than 65 million copies and been made into a successful film series. The ‘rapture’ theology is important, not just because of the impact it has upon Christians, but because of the potential impact it has upon the rest of the world. It directly impacts politics and key world questions such as the Middle East and Israel. It also taps into a very popular film and book genre – the apocalyptic, ‘it’s the end of the world as we know it’, scenarios.

It appears that everyone loves disaster movies. But is the Bible the ultimate disaster movie? Does the Book of Revelation provide a blueprint for the end times? Next month I hope to begin a new series for Christian Today on Revelation for Today, but meanwhile let’s consider what the Bible has to say about the end of the world. In particular let’s deal with the challenge that there are Christians who have a kind of armageddon, apocalyptic theology.

Armageddon is a reference to the belief (based on Revelation 16:16) that some Christians have about the last great battle on earth. I am always wary about beliefs based on one particular verse, even more so when it comes in a difficult to grasp book like Revelation. The Bible teaches that just as Christ ascended into heaven so he will return – not this time as a baby in a manager but as the King to judge the whole earth. Revelation chapter 20 speaks of the Millennium, the 1,000-year reign of Christ. There are three basic understandings of that (along with numerous variations); Post, Pre and A-Millennialism.

Post millenialists believe that the Gospel age began with Pentecost and will end when Christ returns, but before he does there will be a great period (not necessarily a literal 1,000 years) in which there will be Gospel prosperity, the Jews will be converted and many come into the Kingdom.

A-millienialists believe that the millennium began with Pentecost and that there will be no special end time blessing.

Pre-millenialists believe that Christ will return, and then establish his 1,000-year reign. It is from this latter group that we get a lot of millennial thinking in the Christian church associated with strong support for the nation state of Israel (the emergence of Israel in 1948 and the occupation of Jerusalem in 1967 is seen as a fulfillment of prophecy). The emergence of the Christian Brethren founded by JN Darby towards the end of the 19th Century, and the Scofield Reference Bible had an enormous impact, especially in the US. End times theology remains incredibly influential (and lucrative). I grew up in that tradition and can testify that the imagery of the Rapture (when Christ returns and takes Christians up to heaven, leaving the rest of the world to get on with it) is very powerful. However I have since come to see that dispensational pre-millennialism is a 19th century creation and is only one particular interpretation of the Bible that is by no means clear on this. The literal and physical are not the same as the literal and figurative.

Whatever one’s view of the millennium (and personally I think as a Christian you could hold any one of the three – the one thing we can all agree on is that Christ is returning as both judge and saviour), it is surely not right to read the USA and the UK into the Bible, when they are not there. However this field does allow for all kinds of weird and wonderful speculations and all manner of eccentricities. At best they are harmless, at worst they can fuel fantasies which could do a great deal of harm. The doctor who told me that the British are the lost tribe of Israel (a rather bizarre heresy known as British Israelitism) is not quite on a par with those who think that Armageddon is coming, so it won’t do any harm to speed it up. Poor theology in the hands of twisted minds is always a dangerous combination.

As Philip Jensen states “Christianity is a big story religion”. There are multiple facets to the cosmic story that it seeks to tell. Sometimes people get bogged down in the details. Sometimes they get things out of proportion. But what is obvious is that there is a clear Christian view of history. It is not directly linear, as some people believe; ie that the world is steadily getting better or steadily getting worse. The Christian view is that the world is moving from the first coming of Christ, to the second, but that it does so as history is moving in circular patterns towards that deliberate end.

I will leave it to Justin Martyr, the early Church apologist, to summarise Christian teaching about the end of the world.

“He shall come from heaven with glory, accompanied by his angelic host, when also He shall raise the bodies of all men who have lived, and shall clothe those of the worthy with immortality, and shall send those of the wicked, endued with eternal sensibility, into everlasting fire with the wicked devils.” (First Apology – p180).

Sensible thinking modern Western people of course regard all such talk of the end of the world as medieval, fanatical and depressing. And yet their alternative is, if anything, more apocalyptic. The world will be destroyed by nuclear weapons, climate change, a comet or a virus. Ultimately of course nothing matters because the universe is going to either explode or implode…and there is nothing we can do about it. It’s such a hopeless position. Bertrand Russell spoke of his ‘unyielding despair’ when he contemplated the inevitable death of the universe.

“No fire, no heroism, no intensity of thought or feeling, can preserve a life beyond the grave…all the labours of the ages, all the devotion, all the inspiration, all the noonday brightness of human genius, are destined to extinction in the vast death of the solar system; and the whole temple of man’s achievement must inevitably be buried beneath the debris of a universe in ruins.”

The Christian has a far greater hope. We believe that this universe is indeed time limited and bound for destruction. But we also believe that the heavens and earth will be renewed. Rather than a universe in ruins, we see a renewed universe. Meanwhile as Romans 8 tells us “We know that the whole creation has been groaning as in the pains of childbirth right up to the present time. Not only so, but we ourselves, who have the firstfruits of the Spirit, groan inwardly as we wait eagerly for our adoption as sons, the redemption of our bodies. For in this hope we were saved. But hope that is seen is no hope at all. Who hopes for what he already has? But if we hope for what we do not yet have, we wait for it patiently.”

Why the Church has to Start Talking about Hell

Pie in the Sky when you Die? – Understanding Heaven