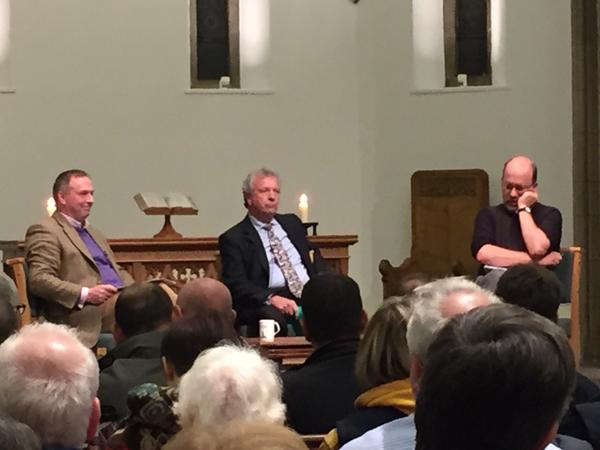 I have reading so much rubbish in the past few days from church leaders and Christian charity leaders that it’s enough to drive anyone to despair.  It’s like we are living in some kind of surreal parallel universe, rather than the real world.   Or maybe I’m the one who is seeing things wrongly….?!  Anyway discouraging as that is, how wonderful that though the church may appear dead, Christ is alive, and His Church will never die….Christ is my only comfort in life and death…

Scotland’s congregations are in “desperate need of their own resurrection” and unless church leaders “stop living in denial” about the state of Christianity they will die, the Moderator of the General Assembly has said.

Rev David Robertson said that the resurrection of Jesus Christ and the hope of the Gospel had the potential to change lives and communities across the nation – but if liberal congregations watered the core message down they would continue to haemorrhage members with nothing to offer an increasingly secular age.

In his Easter address the Free Church of Scotland Moderator also questioned new research released by the Church of Scotland, which claimed that 20 per cent of Scots, or approximately one million people, were committed Christians who never attend worship.

Rev David Robertson said: “When one surveys the church scene in Scotland today it is more than a little depressing.

“On the one hand there is the trivialisation and the dumbing down of Christianity, on the other, church leaders in denial about the real state of the churches.

“On a recent radio programme I heard church leaders speaking about the ‘fact’ that 10 per cent of the population go to church, and 20 per cent who are committed Christians but who do not go.

“There are not one million Christians in Scotland who love and serve Jesus Christ, but do not attend church. Personally I think those who minister to this invisible church should get invisible salaries!

“The trouble is that we have failed to come to terms with the fact that Christendom has gone, and that Scotland is now one of the most secularised post-Christian nations in the world.

“The good news is that this means that we have a tremendous mission field.”

The Dundee minister continued: “The bad news is that far too much of the church cannot seem to agree on what the mission is.

“When the church cannot even agree on its own core message, never mind the moral and social positions it should take, it is little wonder that the world does not listen.

“Easter is a great time to remind us what is of first importance. As Paul tells us in 1 Corinthians, the fact that Christ died for our sins and that he was physically raised from the dead, is the very heart of the Christian message. And yet we have professing Christian clergy who would deny this!

“Church leaders are continually pleading for unity. We in the Free Church long for Christian unity – but it must be Christian.

“It is impossible to be united with those who would deny the very basics of the Christian faith. I hope and pray that all those who hold to the Gospel of Jesus Christ, as taught to us in his Scriptures, will work together to re-evangelise Scotland.

“Easter is about renewal, resurrection and new life. The church in Scotland is in desperate need of all of these.

“Though we in the Free Church are thankful for growth, we also have our own difficulties and are too in need of renewal and revival.

“May the Lord grant mercy and an outpouring of his Holy Spirit upon his church and this nation.”