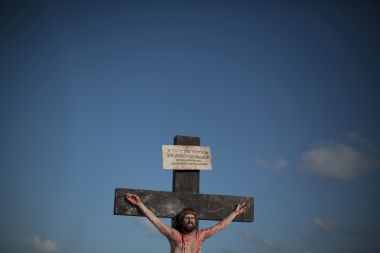 This is the heart of everything.  The key question for theology, evangelism, apologetics – indeed all of life.  It is the question of Jesus Christ – it is why we are Christians and not just Theists.  My latest article on Christian Today – click the link for the original….here is the text.

The Question – The young man at the University of Stirling made an astonishing statement, “OK, you have destroyed my atheism, but what do YOU believe? And why?” It is one of the few times that I have been floored by a question. What would I tell him? What would you say if one of your friends asked you that? Earlier in this series we looked at issues like evidence and proof, God and science, the God of the Bible and we will look at other key issues. But at the end of the day you can’t argue someone into the kingdom and to be honest, many ‘apologetic’ discussions seem to go round and round in circles. No sooner do you answer one accusation/question than another one comes along. So do we have one knock down reason why we are Christians? I think we do.

Are you a Christian? – Even asking that question indicates a key part of the problem. It is the use of the term ‘Christian’ as a means of self-identification. To the unbeliever it sounds religious, tribal and a bit self-righteous. When we bring the good news of Jesus it sounds to them like we are asking them to change tribes, or become ‘like us.’ And yet the early followers of Jesus did not often refer to themselves as Christians – the term Christian was a nickname first given to the followers of Jesus at Antioch (Acts 11:26) and quickly caught on. Nowadays the term Christian can have a great variety of meanings – it can mean a ‘good’ person in the sense that someone might say “that’s not very Christian of you,” or it can be a term of contempt usually followed by the words ‘nutter’ or ‘extremist.’ It can be an ethnic or tribal identification, but it seems to me that it is not often used in the original sense of the word, a ‘follower of Christ.’

The Course – The risk is that we speak about Christianity and have courses such as Christianity Explored and Alpha, which are in danger of presenting Christianity as a system, or a philosophy or just another religion. Of course their intention is to present Christ and this they often do in a wonderful way, but it’s the impression that is often given. Sometimes, as Burns prayed, God gives us ‘the gift to see ourselves as others see us.’ Alex Preston in his novel The Revelations, which is a thinly disguised attack on The Alpha Course and yuppie church in London, portrays Christianity as primarily being about ‘The Course.’

Although we are not often as extreme and cultish as Preston’s caricature, there is a real danger that we do present the course rather than Christ. You do the course and you pass the exam or go through the initiation ceremony at the end. We have Christian organisations, clubs and even political parties. We listen to Christian music, read Christian books and even have Christian holidays. The term Christian is now used as much as an adjective as it is a noun. And that’s not very Christian.

Even in Christian circles and media it is surprising how many speak about Christianity and few speak about Christ – except as the ultimate referee (‘my Jesus would not say this or would do this’) or good luck figure (equivalent to ‘may the force be with you’). For those seeking to communicate the gospel our concern is not to ‘Christianise’ people but to bring Christ to them and them to Christ. It is a question of identity. I am not a Christian so much as I am ‘in Christ.’ That is the language of the New Testament we need to recapture if we are to be effective in our communication of the Gospel. We can only share what we have. We can only share ‘who’ we have.

The late, great Christopher Hitchens wrote a book provocatively titled God is not Great. One of the main responses was entitled What’s so Great about Christianity? In my view it was the wrong title and the wrong answer. Christianity is not great. Christ is. Being a ‘Christian’ is not great. Being ‘in Christ’ is. Far too often we are so busy defending Christianity, or the Church, or the actions and words of some self-professing Christians (including ourselves), that we forget about Christ. And yet He is the ultimate apologetic. Truth is not a set of propositions. It is a Person.

Who is Jesus?  Having written a response to Richard Dawkins, I had planned to write a response to Hitchens, when I received the question from the student mentioned above. I told him that there were many reasons I believed in God, but the ultimate reason was Jesus Christ. His response was revealing “Yes, but who is Jesus?” He was not ignorant. He had the usual general knowledge and cultural awareness of Jesus (a kind-of first century hippie who spoke of peace, love and understanding and then got killed), but his question was spot on. How could I respond?

Magnificent Obsession – I honestly could not think of a book about Jesus to give a post-modern 21st Century western secularist. So I wrote one. Magnificent Obsession (this week’s recommended book!) I gave it that title because of a BBC programme I watched as a teenager entitled How to Get to Heaven in Montana. It was the story of a Mennonite community where some of the younger members had become ‘born-again’ Christians, which had resulted in some tensions in the community. The pastor had died and his son became the leader of the ‘born agains.’ At one point the interviewer asked this young bearded man, “What does Jesus Christ mean to you?” I will never forget the look on his face, as his eyes filled with tears and he passionately and quietly explained, “Jesus? Jesus? He is my everything. He is beautiful. He is my Magnificent Obsession.”

That is who we are asking people to believe in. Not the system. Not the Church. Not the philosophy. Not the apologetic arguments. But Christ. Not ‘your own personal Jesus’ as so often portrayed, but rather the real flesh and blood Jesus, who really did exist, who really did teach, who really did die, who really did rise from the dead, and who really will return. (For the reality of the historical Jesus have a look at John Dickson’s wonderful Life of Jesus.)

Knowing Christ – The Good News is first of all about Jesus. Not us. To use theological language our apologetic must be Christological. Christ centred. Everything is about the beauty, love, humanity, divinity, will, teachings, death, life, resurrection, promises, warnings, character and works of Christ. If we want to know God, it is not enough to be theists, we need to know Christ. “In the past God spoke to our forefathers through the prophets at many times and in various ways, but in these last days he has spoken to us by his Son, whom he appointed heir of all things, and through whom he made the universe. The Son is the radiance of God’s glory and the exact representation of his being, sustaining all things by his powerful word.” (Hebrews 1:1-3)

If our apologetic is Christological then it means every question we look at will come back to Jesus. Not that at the end of every talk we just repeat the mantra “Jesus is the answer,” but that in our own thoughts, words and actions we show that He is the centre of everything.

When we look at the God of the Old Testament we do so through the lens of Christ who taught the two disciples on the road to Emmaus.  “And beginning with Moses and all the Prophets, he explained to them what was said in all the Scriptures concerning himself.” (Luke 24:27) In speaking about God and science we remember Colossians and how all things are created by Him, for Him and in Him all things hold together.

Christ is our ultimate evidence. Larry King once said that if he met one person in history it would have to be Jesus and that the one question he would ask would be, “Were you born of a Virgin?” – because for him that would change everything. For me what changes everything is the resurrection. An atheist friend approached me after reading Magnificent Obsession. “David, what amazes me about your book is that you really believe that Jesus is still alive… wow… if that were true it would change everything” Indeed it does.

If you want to communicate the Gospel better, you need to get to know Christ better. I am intrigued by the rather bizarre fashion of some who state that they don’t go to church because they want to stay home and witness to their neighbours. But what is that witness? It is far too often about how nice I am, or my tribe is… not about Christ. How can it be? We don’t know Him. We don’t long for Him. We don’t even miss Him. If the apostle Paul could say, towards the end of his life, “I want to know Christ,” this man who wrote a third of the New Testament, who had met Jesus and who had planted half the churches in the world, why are we not aware that our greatest need is to know Christ better? To know the love that surpasses knowledge. To know how long, deep, high, and wide is the love of Christ.

Let me give a wonderful testimony that I received from an older Christian last week – I want to share how I’m beginning to see the might and majesty of Jesus. I’ve longed for this all my life. The first part of Colossians vibrates and pulsates as never before. I am beginning to see Jesus as never before. Why has it taken so very long? A benefit of old age? I am now beginning to understand why He is your Magnificent Obsession and of so many others. Now He lives in a wonderful new way. The Bible is coming alive. I thought I loved it, but this is new! Praise Him!

Do you not think that this lady will be a far more vibrant and effective witness to Jesus because of what she is experiencing in and through his Church? We testify to what (who) we have seen and heard.

They don’t need a course, or Christian values, or Christian tradition or even the Church, valuable and useful though all of those may be. They need Christ – and then along with Him, they graciously get all things. How strange that we so often present the ‘all things,’ and so rarely present Christ.