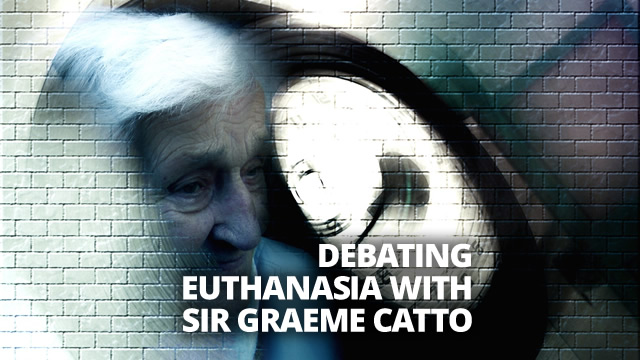 It was a difficult task made almost impossible.

Abertay University had asked me to debate with Dr Graeme Catto on the question of euthanasia.  Among other things, Sir Graeme Catto was a member of the governments commission on assisted suicide and the chairman on assisted suicide.  He is very much part of the liberal establishment and knows what he is talking about.   An intelligent and compassionate man, he comes across well and makes a compelling case for his very moderate position.  So I knew it would be tough….and then it got tougher.
The motion had been –

‘Persons who wish to decide when to end their lives should be able to do so with the assistance of a registered physician’.

At Dr Catto’s request the motion was changed to

‘The dying should have the right to a dignified death at the time and place of their choosing’.

Now my difficulties were multiplied.
At the beginning of the debate a vote was taken, in the packed lecture theatre. (Kudos to Abertay staff and students for such a well run, organised and popular debate).  80% were for Dr Catto’s motion, 10% against and 10% abstained.
And it got worse.  Dr Catto spoke and he spoke really well.  He was not for euthanasia, he was not for anyone being helped to die except those who were going to die within six months, were in pain and were mentally competent.
What could I do?   I had 15 minutes to deconstruct  a whole worldview, challenge the presuppositions of the motion and try to persuade young people whose whole culture and academic environment prejudices them against any kind of ‘religious’ involvement in moral issues.
I won’t give you an account of the whole debate – they may put it online at some point and I’ll link to it then when they do – but these were my main counters.  I just list them.
Dr Catto’s main points were:

He specifically disavowed ‘Europe’ and euthanasia.  He also said that doctors could not be trusted on this and he put a great deal of faith in opinion polls.

There were excellent questions raised in the Q&A (again kudos to the Abertay students).  Of course, the issue of abortion and choice was brought up, as were the usual arguments.
Dr Catto finished his summary with an astonishing statement, “There are no risks involved.” My response was that, as a religious person, I was supposed to be the one making statements of ‘Faith,’ but that this was one of the most blind faith statements I had ever heard!
I was able to give many examples from my pastoral experience but my final statement was greatly helped by Dr Catto’s reliance on Oregon and his statement that he would not euthanise someone in a vegetative state (or with dementia) because that was, “The price we have to pay for living longer.”   I pointed out that the Oregon suicide rate was the 2nd highest in the USA; that I did not want the US health system (especially if I was poor and sick);  and that perhaps the small minority of people having “Painful deaths” might be the price we have to pay to protect society; especially, the poor, the weak, the vulnerable and the disabled.
Incidentally, as regards Oregon, Sir Graeme was a bit angry with me after the debate and showed me his phone.  You need to get your facts right, he said, Oregon isn’t even in the top 20.  I told him that I relied a great deal on the wonderful work of Dr Peter Saunders and the Christian Medical Fellowship.   He said that was ridiculous as they were biased and he advised me to check Google.  This somewhat amused me.  Firstly, the chairman of Dignity in Dying, an organisation seeking to legalise assisted suicide for terminally ill adults, complaining about bias.  Secondly, that someone who has made this his life work, relying on Google.  By the way I have just ‘googled’ it – and guess what, it is the Oregon state health department who gave the figures showing that the Oregon suicide rate is 41% higher than the US average and has been increasing since assisted suicide was allowed!
We then came to the vote.
In my experience (and as I am often told) these kind of debates don’t change anything….maybe.  The vote at the end was 70% for Dr Catto’s motion, 21% against and 9% don’t know.   For me this was highly significant.   Here I was against one of the leaders of the assisted dying movement – a man with vast experience, intelligent, pleasant and a ‘Sir’.   I was in a somewhat hostile environment (I don’t mean in a nasty way – just in terms of the presuppositions being held) and with a skewed and biased motion.  Plus I admit that I could have prepared better.  And I don’t think I spoke all that well.  And yet, there was a significant shift (which the Daily Mail reporter picked up on).  Why?
Perhaps Jimi Hendrix was on to something -“all I’ve got is a red guitar, three cords and the truth’.   Or in my case ‘all I’ve got is a black bible, the triune God and the truth’!     Be encouraged…..even when the playing field is not level, when we get the chance the light of the Gospel will always shine through!
You can read the University’s official account of the debate Here