Your Comment headline “Culture wars that saw Donald Trump rise to power are degrading democracy in the UK” (3 May) is surely correct. Except in this. Culture wars have already divided democracy. The almost universal acceptance of “progressive” cultural values by the elites in academia, politics, the corporations and the media, has resulted in the demonisation of anyone who dares to think differently – at least 50 per cent of the population.

There is little difference between Ruth Davidson, Anas Sarwar, Nicola Sturgeon and most of the civic elites in Scotland. They treat with contempt those of us who think that a woman is an adult human female; that parents not the State are responsible for children; that Christophobia is as bad as Islamaphobia; that poverty, drugs and crime are at least as important as all the Woke issues coming out of Yale, Harvard, Oxford and Cambridge.

Perhaps if our civic elites really did believe in diversity, inclusion and equality they might be able to encourage more democratic discourse. 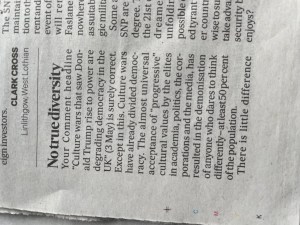 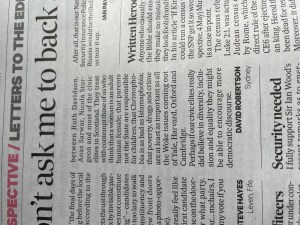