One of the best YouTube videos of the past weeks has also turned out to be one of the most controversial. Flakefleet Primary School in Fleetwood, Lancashire, made a lovely video of children marching and dancing through the school with England flags.

Yet it was taken down because a couple of parents complained. Apparently, they objected to a sea of white faces, and they thought it encouraged hooliganism. It reminded me of the time after the 2014 World Cup where the then shadow attorney general, Emily Thornberry, was compelled to resign after posting a snobby tweet which showed a terraced house, covered in England flags, with a white van outside. 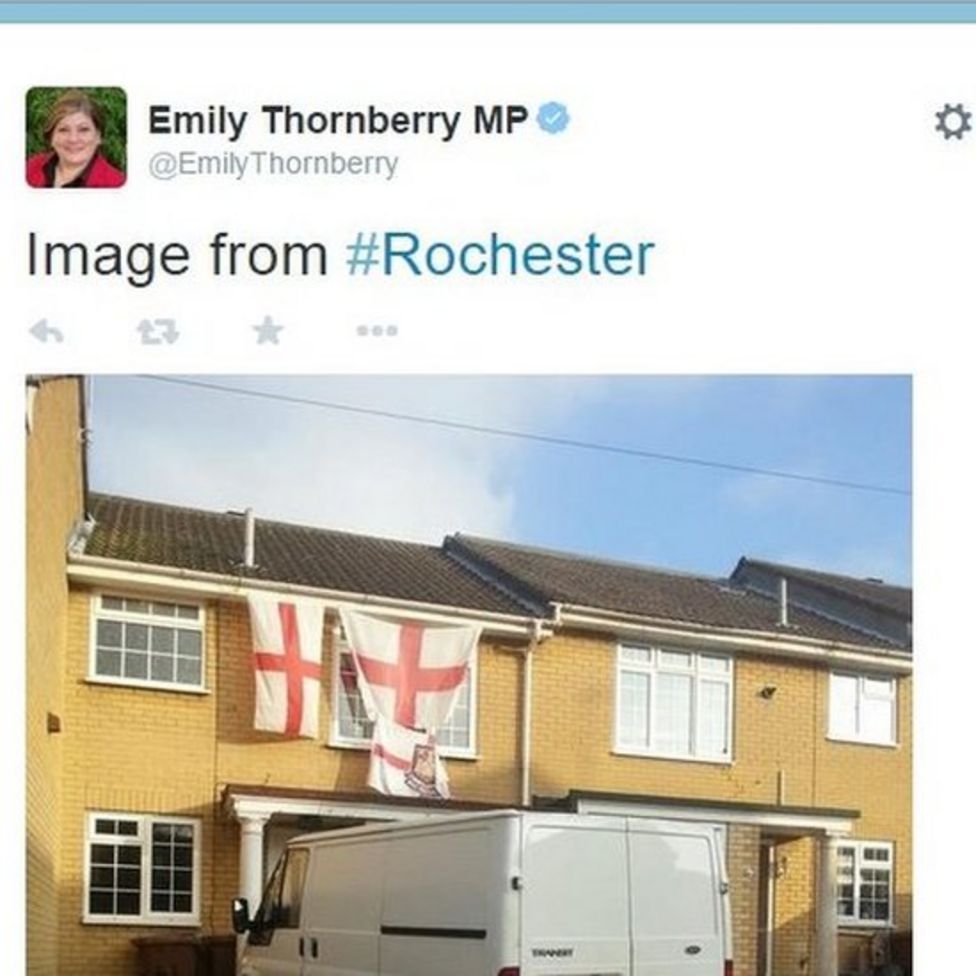 These things matter. Labour lost ‘white van man’ and much of the ‘patriotic’ working class vote – which is why they have yet to return to power.

This past week, politicians of every colour have been desperate to be seen supporting England. Everyone wants a piece of reflected glory. One suspects that people who never normally take an interest in football are getting selfies taken showing their joy and exuberance so that they too can be seen as ‘a man of the people’.

Even some on the left, who used to regard the St George’s cross as a far-right symbol, have let themselves be seen with the once cursed symbol. Times change – and success changes times. 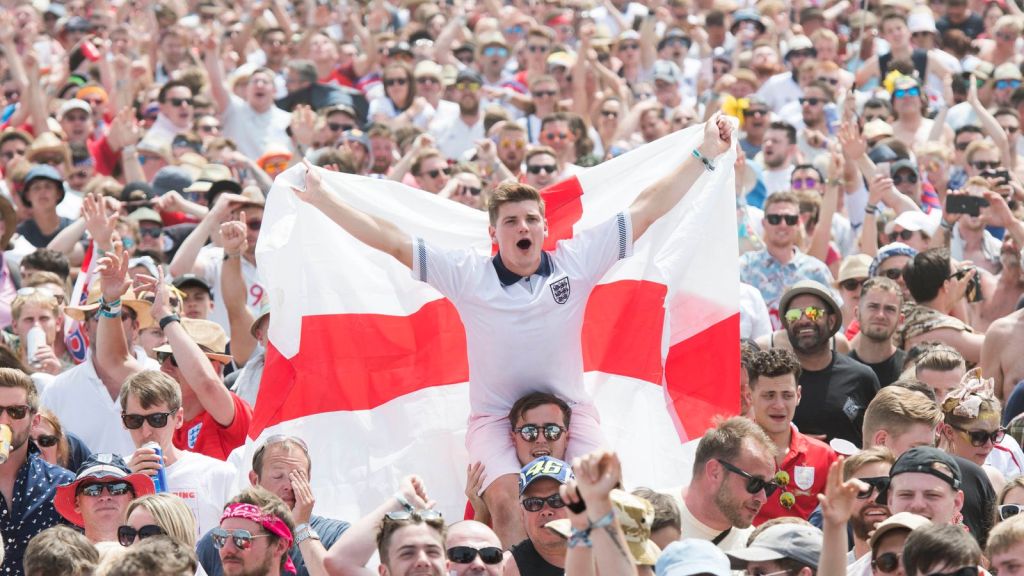 The politicians are not the only bandwagon jumpers. The Church takes that opportunity too. Let an England footballer so much as hint at a belief in God and we are claiming them as a champion of the faith! I am as encouraged as the next Christian to hear of a public figure publicly professing their faith in Christ. But we need to be careful about claiming people as our champions, when we don’t really know what they believe. Nor do we know their lifestyles.Besides which Raheem Sterling professing to be a Christian is no more a proof of the power of Christianity, than Liverpool’s Mohammed Salah is a proof of Islam!

Coming from Scotland I have seen the damage that linking religion and sport can do. Which is why I will not be looking at Sunday’s UEFA final as the Anglicans vs the Catholics! But there is a similar danger in linking sport and nationalism. There is a difference between being proud of and supporting your country in sport, and making it such a matter of personal identity that you end up hating those who you regard as your rivals.

I used to be an ABE – Anyone But England. Like many of my compatriots, I could say that I supported two teams – Scotland, and anyone playing against England. Although things are improving, I suspect that there will still be a large number of Scottish football fans wearing Italian shirts on Sunday. 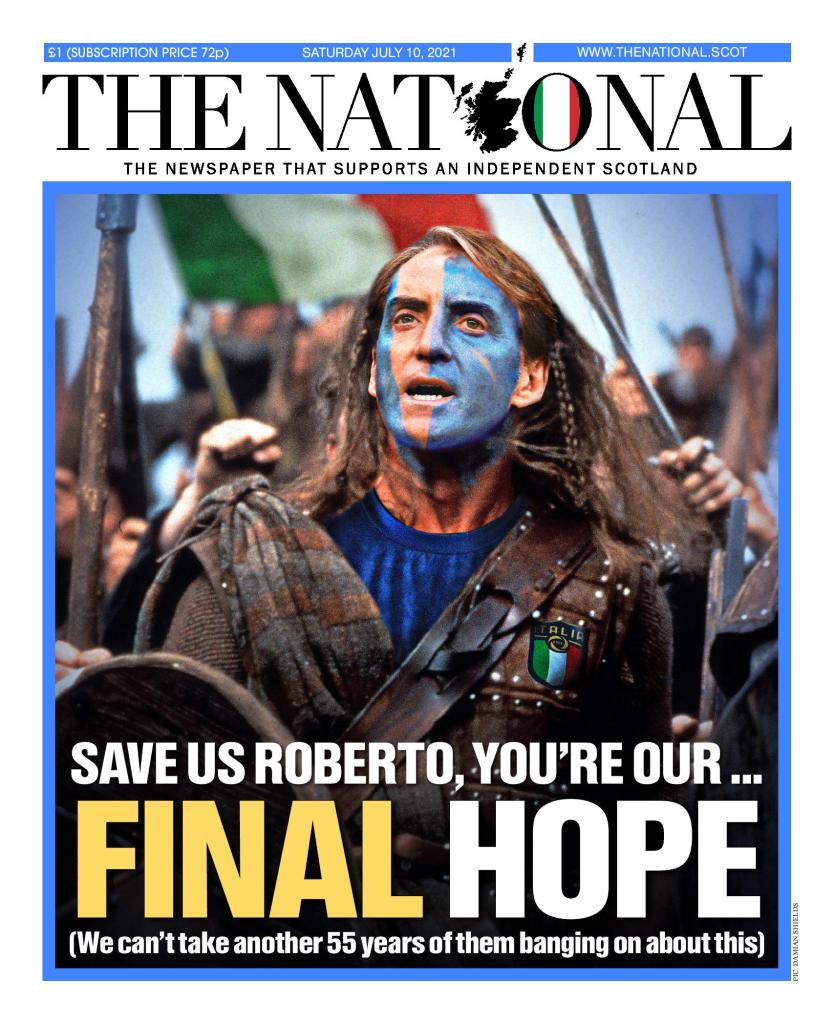 The National newspaper in Scotland (in effect the house magazine of the SNP) had a front page on Saturday which consisted of a mockup photo of Roberto Mancini (the Italian manager) as Mel Gibson in Braveheart, with the headline “Save us Roberto, you are our Final hope”. Some think it is quality banter. Others see it as narrow, bitter and petty, expressing a darker nationalism than the ‘civic’ nationalism we are meant to be proud of.

During the last World Cup, I got over my ABE. It was hard and I suffered withdrawal symptoms. I too used the excuse that I didn’t want to hear English commentators go on for another 50 years if they won it. But then I came to see that there is a darker side to it, and that it really does fuel hatred.

It’s all very well the English dressing as crusaders, the Danish as Vikings and the Scots singing about winning a battle 700 years ago. But when we cross the line from language, myths and emotions from the distant past, and turn them into life-or-death issues for the present, we have gone too far.

The trouble is, that sometimes sport acts as a substitute for other more important matters – politics, economics, family and religion. When that happens, we turn it into an idol and invest far too much of our emotions, time and money. When the investment doesn’t pay off, we suffer emotionally – we get depressed, angry or proud. This is not a good way for anyone to be but especially Christians, whose identity and meaning is found in Christ – not in their country’s sporting prowess!

Nonetheless I am thankful for sport and for the joy (and anguish) it brings. This Scotsman will be up early in the morning in Sydney watching the final, and cheering on England – not least for the pupils of the primary school in Fleetwood and the joy of sport they represent.

Quantum 154 – Fear God and You Will Fear Nothing Else – World News, Culture and Views…

Is Islamophobia Rampant in Scotland? CT