Letter from Australia 91 – An Open Letter to Nicola Sturgeon

Thanks for your ‘open’ letter to the people of Scotland which your loyal lieutenant, John Swinney, passed on… 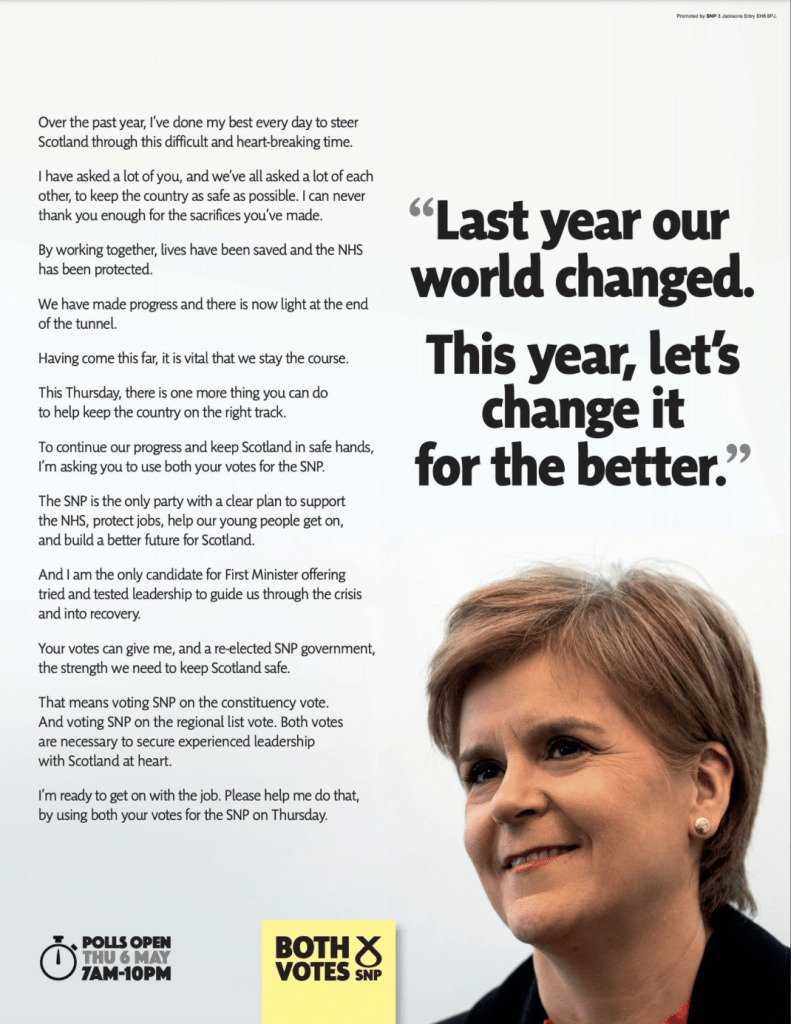 Firstly, I want to thank you for your service to the country – because that is what you are – a public servant.   It must be particularly difficult to serve at this time – when politicians have largely been given extraordinary powers and carry extraordinary responsibilities.   I don’t doubt that you feel the burden of these and that you do care, as do most of our political leaders, for those whom you are serving.  I would not have wanted to be in your position.

I’m glad that you recognise that mistakes were made – not least in the debacle over care homes – and in some of the lockdown decisions.  We can disagree about various aspects of the policies that you have pursued, and the details involved.  But I don’t think that you are a conspiracist, or a mass murderer or so callous as to see Covid 19 as an opportunity. You have been doing the best you can.   And for that we should be thankful.

However, this open letter is really disturbing.  Why?

The Only Way to Keep Scotland Safe?

Your letter tells us that the only way to ‘keep Scotland safe’ is to vote for the SNP in general and you in particular.  The SNP is the ‘only party’ and you are ‘the only leader’ who can do that?   Apart from the sheer narcissism of those Trumpian like comments there is another aspect that bothers me.  Do you really think that if, by miracle, someone else was elected as First Minister, Covid would run riot in Scotland?  Do you really think that you are that important and indispensable?

I was concerned when you continued to go on national TV every day to tell us the ‘Covid news’.  I wondered why?   Obviously other government officials could have told us.   At first, I thought it was largely a cynical ploy that most politicians would use.  All over the world leaders are portraying themselves as the indispensable faces of public health and safety.   But your latest letter has got me thinking.  What if this is not just a somewhat cynical use of publicity to boost your political stature?  Perhaps you really do think that such is our reliance on you, we would crack up and not last the pace, if we did not see you every day?    Perhaps you really do think of yourself as the Saviour of Scotland, without whom we are all heading to Covid destruction?

Your letter states that you and your party are “the only party with a clear plan to protect the NHS, protect jobs, help our young people get on, and build a better future for Scotland”.  Do you remember the afternoon of Friday 4th May 2007, when my fellow Christian Dave Thompson, was elected as the MSP for the Highlands, ensuring that the SNP came to power?   You have been in power ever since.  What is your record in all these areas?

I have watched the NHS decline and be stretched into an appalling state – under your watch.  Coming to Australia and seeing the level of care offered here, compared with Scotland, has made me realise how backward we have gone.  I remember one doctor from Singapore coming to Dundee and I foolishly asked him if he had come here for training.  “Oh no,’ was his reply, ‘you are years behind Singapore…I came here as a missionary!’   I have seen people die because of delayed treatment; staff because worn, tired and disillusioned – many of them giving up and moving elsewhere; I have witnessed the size of the machine increasing and the quality of care decreasing.   You have failed to deal with the major issues and instead have offered such freebies as free prescriptions to the middle class – as a result of which hundreds of millions are wasted on drugs every year.   I know of no-one involved in the NHS, who thinks that the NHS is in good shape or fit for purpose – at least in private.  Such is the culture of fear that you have engendered in Scottish civil life that people are largely reluctant to speak out publicly.

The NHS needs a fundamental, radical root and branch reform (as proposed for example by your colleagues Alex Neil and your former leader Gordon Wilson).  But instead, all you offer us is slogans, promises of more money, and yet more subsidies for the middle class – this time in dental care.  Meanwhile life expectancy in some areas of Scotland is worse than in Africa, waiting lists are high, mental health is on the decline, and the treatment of the elderly especially is appalling – whatever happened to respite care?    Instead, you offer us empty, uncosted promises (which depend on a Westminster largesse that you say you want to get rid of), a gender self-identification bill to promote one of the most mentally harmful ideologies on the planet, support of abortion in Northern Ireland – and a promise to ‘consider’ euthanasia.     You say you are going to protect the NHS (I assume from the Tories?), but who is going to protect the NHS from you?

I don’t think you have a great record in protecting jobs – at least not in my former city, Dundee.  You have not set the economy free – in fact Scotland is one of the most highly dependent economies in the free world.  As for young people – you have abysmally failed.  Education has declined spectacularly.  Your free tuition policy sounds good – but it has come at the expense of the poor – less of whom are now in University education.

I could tell you so many stories of schools I have been in, where teachers are trying to do a good job, but they are being asked to make bricks without straw.  I’ll just tell you one.  A young left wing, feminist, German woman who gave up a career because she was motivated to work with young people in education.  She got her teacher training and then went on her years’ probation.  After which she gave up and left Scotland.  Why?   Because from her perspective our schools are just about baby sitting and social training – not education.   As a result, one in five Scots is now functionally illiterate.  Of course there are still good State schools – and if you can afford to pay the mark up for a house in their catchment area you will be ok.  But if you are poor – then you will have little chance of a decent education.   IN your Brave New World, children will be assigned to their social status from the age of 5!  Few will escape.

Meanwhile, your curriculum for excellence is producing a culture of mediocrity.   Our teenagers will have the ‘right’ political and ‘cultural’ opinions – but they won’t be able to think for themselves or to express themselves in anything other than the State ideology you are now insisting schools teach.    When I see primary schools setting up ‘Little Red Guard’ style LGBTQI pupil committees to ensure that the teaching is ‘inclusive’ – when I hear children being taught that their gender is fluid and that they can choose any one of 100 genders – I know that we are not in a sane world where young people can flourish.  This, and so much more, is all happening on your watch.   And all you offer us is yet another middle-class subsidy – free laptops for all pupils – even for those who already have them.

The Saviour of Scotland or the Band Leader on the Titanic?

So, you will forgive me.  I don’t think that you are the only leader who can keep us safe, despite your hubristic claim.    And I don’t think that you are leading us to a better future.  The quality of the opposition you face isn’t much better mind you – they all seem to have been drinking the same ‘progressive’ Kool-Aid.  In fact, instead of you being the Captain of a ship leading us onward into a progressive Nirvana, you, and your opponents, are much more like band leaders on the Titanic, arguing whose mood music is the best, as the ship slowly goes down!

I won’t add anything more.  I don’t expect you to read this.  You didn’t pay any attention to my previous open letter, why should you?  I’m a nobody in today’s Scotland (according to your Westminster leader, because I don’t share ‘Scotland’s values, I am not even welcome in my own country!) , there is not much I can do about the situation.  Even if I could vote (and I can’t because apparently as a Scot living temporarily in another country I am forbidden from voting in my own), what difference would it make?   All I can do is pray – and in my own small way, try to raise awareness that the Empress has no clothes.

You say you are ready to get on with the job.  I appreciate you mean well and probably genuinely believe in what you are doing – but so far, your job seems to be that of destroying the Scotland I know and love.   I hope that you are soon out of that particular line of work.

Let me return to the idea of you being a public servant – not the Great Leader and Saviour.   There is something even more important than being a servant of the public.   The Bible which you don’t know, and I suspect haven’t read (given your blank look when you attended my church for the funeral of Gordon Wilson) – tells us something that is quite sobering and astonishing.   You are also a servant of God (see Romans 13).  That doesn’t mean that Scotland should be a theocracy (although I’m not sure that that is any worse than being a technocracy or bureaucracy) where we have to obey the government because the government has a direct line to the Almighty.  But it does mean that ultimately you will answer, not to us, the people, but rather to God, for what you have done with the power and privilege he has granted to you.  My hope and prayer is that one day you will come to realise that, repent and reform.    It is only if that happens to you and our other leaders and Scotland will get the renewal we so desperately need.

Meanwhile I pray that somehow out of this whole mess, God will have mercy on Scotland (and on you and all our political friends and opponents) and deliver us from the road to destruction you are leading us down.