Every year at Easter I get more and more frustrated at Christian spokespeople who get on the media and then say so little – other than try to be nice and just reflect the values of the culture whilst proclaiming how radical Christianity is.  There are great exceptions but increasingly I find that some ‘secular’ writers make more sense and are less bland and conformist than many clergy and Christian commentators.  This year the best articles I have read have been James Mumford’s ‘Spiritual but not Religious’ in the Spectator and this from Kevin McKenna in The Herald – the full text below (republished with permission!).

Kevin McKenna: Christ’s life and death on a cross at Calvary challenges all of us

In this Covid Holy Week the suffering and death of Jesus have never felt more meaningful; nor have his choices. In the final weeks of his human life our saviour chose to be with prostitutes; drinkers and assorted social misfits: those whom society pushed to the outskirts of society. He seemed to have a special care for lepers.

His miracles weren’t Hollywood events, conducted on stages for maximum impact; they seemed to occur on whims born of human compassion: blind people; the disabled; those experiencing psychological trauma; widows in their grief being fleeced by the religious authorities. His flashes of anger are directed at privilege; the desecration of sacred places for profit; at the cruelty of laws which imprison rather than liberate.

His death was an execution staged and carried out by the powerful who had simply had enough after three years of being called out by Him. To do it they offered bribes; bent the law in their favour and then stirred mob fury by affecting false virtue.

Throughout history, the Catholic Church’s own boss class subliminally shifted the emphasis of these messages as they sought the financial support of temporal power structures. Less than a century before the most lethal pandemic in human history – the Black Death (1346-1353) – they were urging Europe’s richest men to annihilate Muslims in exchange for sellable indulgences… and called it a Holy War.

They took refuge in Christ’s oft-quoted but often misrepresented declaration: “The poor you will always have with you but you will not always have me.” But this was a rebuke too: “what do you care about the poor?”

In this Covid year the corporates have been mouthy that a more nuanced approach to lockdown hasn’t been adopted. What they mean by ‘nuanced’ is one that gives them dispensation to profiteer, secure that their personal resources will always provide protection.

Coronavirus has increased inequality but it didn’t cause it. It has merely exposed the social injustices that had been present for generations. We permit this to flourish because we make an accommodation with it after we feel we have achieved herd immunity from its effects.

Coronavirus reduced sophisticated, democratic government by the cleverest people in the world to rubble in a matter of weeks. As their systems and infrastructures collapsed the inequality these masked were exposed. It’s why, knowing that these governments are unable to protect them in the teeth of Covid 19, frail, vulnerable and elderly people will always seek comfort in the life of their saviour and the events that led to his own suffering and death. They feel close to him on that hill at Calvary.

This week, Scottish Government figures revealed that 12% of pensioners are in a state of “persistent poverty”. The Chief Executive of Age Scotland said: “It’s hugely frustrating that levels of pensioner poverty remain so high and there has been no real progress in reducing it.” During lockdown they were barred from the places that provided consolation.

This is not to condemn the government for illegally shutting churches. They did this not to be cruel or to discriminate but through a failure to understand. Those of us who trusted that they were simply following the science now know they’d been blinded by it. This was born of ignorance about what faith means to people. Faith embarrasses secular governments and makes them feel edgy and uncomfortable. It should, for it implies loyalty to an authority greater than anything that exists in the realm of civic control.

The tendency of some smart people to mock the religious faith of others has always puzzled me. In common usage we deploy an entire glossary of words and idioms that indicate design and planning: patterns of human behaviour; the diurnal changing of the seasons, the precision engineering of all living and breathing creatures; the certainty of nature that provides the foundations of civilisations and industries.

Yet, in the face of so much that has clearly been designed and landscaped, they cling to the randomness of our existence; that it was a mere happy accident. That this might hint at a plan and the big possibility that lies behind this – a planner – cannot ever be contemplated. This is not to argue for the existence of God; merely a reflection on why belief in this existence at least deserves some accommodation.

Perhaps, though, Christians are too pre-disposed to adopting victim status; to interpret the fury of the mob as a personal slight. We cite the extermination of Christians throughout the world and nurse a silent rage that expresses itself in the abjuration: “They wouldn’t treat us like that if we were Jews/Muslims/Hindus.”

Well, perhaps. But when you belong to a church whose own authorities gladly participated in the invasion and sacking of the lands and property of Jews, Muslims and Hindus and turned a blind eye to the sporadic attempts to exterminate them then perhaps you need to take it on the chin.

Yet, even to talk of faith you feel required first to validate your right to do so. It’s fashionable in Scotland right now not merely to dismiss religious faith but to do so with malice. When a person in public life expresses support for an idea associated with faith they must first assure their followers that, of course, they don’t actually believe any of this jiggery-pokery. For that would be to invite ridicule in enlightened, progressive Scotland.

The message of Christ’s death and resurrection should evoke profoundly emotional reactions in the hearts and minds of all who hear it, believer and non-believer alike. You can’t simply shrug off this sort of stuff; not when it presents a direct challenge to your way of life; your narcissism; your arrogance of intellect; your banal certainty that you are the master of your own destiny and your own salvation.

And that your salvation might lie in self-sacrifice and belonging to something bigger. And that you might be required to retreat and reduce so that something more vital may flourish … true peace; true justice; true equality.

I don’t necessarily agree with all that Kevin says but his challenge to our anti-Christian culture is spot on.   His emphasis on the failure of governments, design pointing to a designer, the historical failures of some who profess Christianity,   the irrationality hostility to Christianity within civic Scotland, and the challenge of the Resurrection is greatly appreciated.    I tweeted this week that I thank God for the Spectator – their cover this week is brilliant.  And received the usual attacks.  Well I also thank God for Kevin McKenna, an intelligent, thoughtful and truly radical writer – would that we had more like him.  Happy Easter!

PS.  Have you heard the Easter Quantum yet? Quantum 140 – Foucault, Fletcher and Chariots of Fire – the Easter Episdode 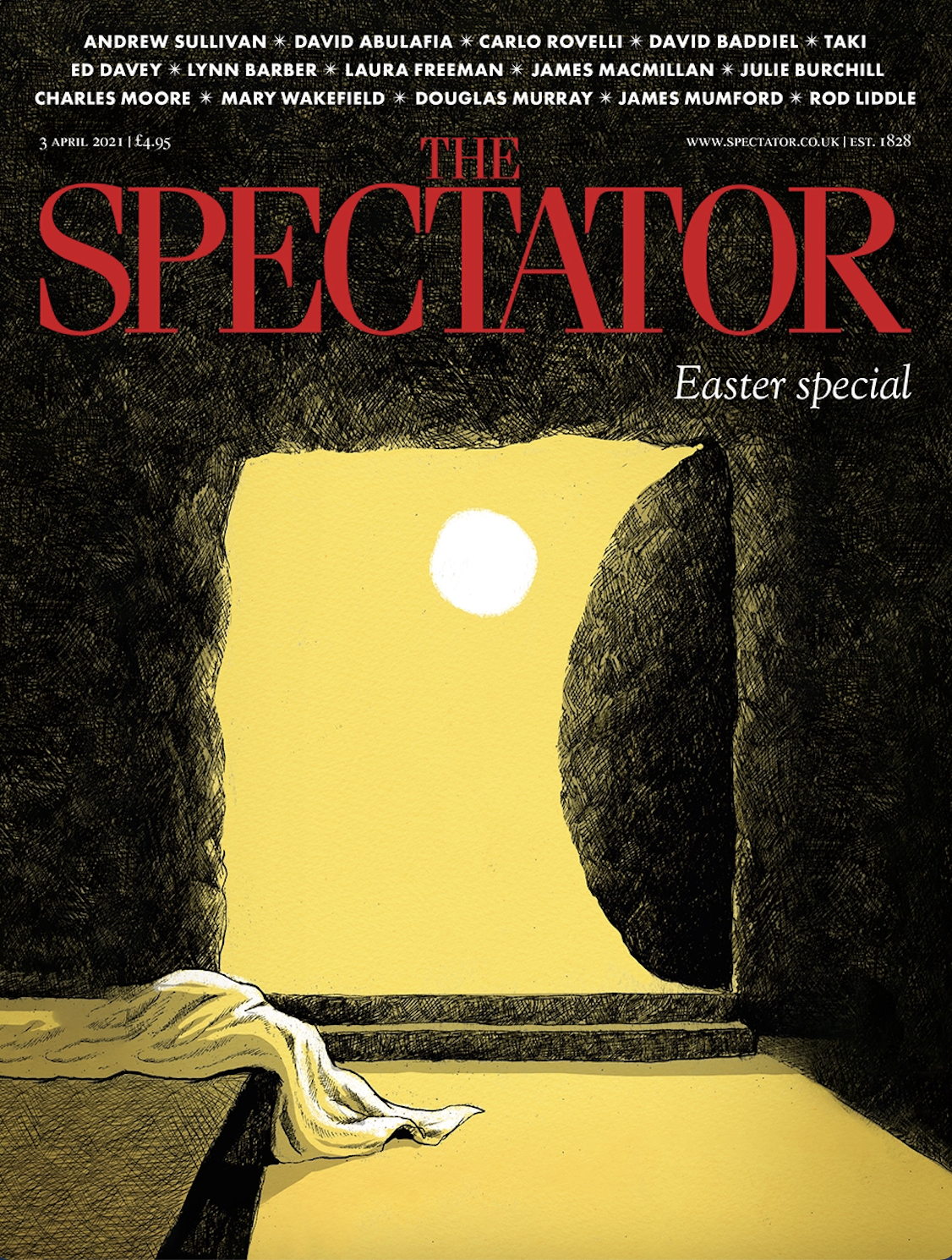