This weeks article in the Australian Presbyterian is a follow on to my review of Come Let Us Sing –  by Rob Smith.

Being back in a service of public worship last Sunday was lovely. The ‘social distancing’ is not too much of a culture change for this Scottish Presbyterian – although the continual cleansing of everything is less familiar! But it was lovely to meet people and to worship together. The one thing that was really weird was not being able to sing – we were told just to hum along as the band played songs of praise. It goes against every grain in my body to sit silent and listen to others praise God. The cry of the psalmist in Psalm 95 is “Come, let us sing”, not “come, let us listen to them sing”.

In this regard there was a fascinating article about collective singing by the arts correspondent of The Australian, Matthew Westwood. https://www.theaustralian.com.au/arts/coronavirus-when-pub-choir-becomes-a-chorus-of-one/news-story/250ebb25f76dae814bc9fee7e3e94e45?utm_source=TheAustralian&utm_medium=email&utm_campaign=editorial&utm_content=TATodaysHeadlinesSubAM

The reason for us being banned from singing is that singers expel water vapours and spittle when they sing. There is a danger that a singer who has Covid 19 will thus end up spreading it. However, it is not as simple as that. The WHO initially declared that Covid 19 was spread primarily by touch and heavy droplets, not aerosol transmission. Although they have updated their guidance, the jury is still out on just how much aerosol transmission occurs. More recent studies suggest that it’s not singing that’s the problem – but rather the volume. I.e. normal Presbyterian singing might not really be a problem! We tend not to obey the injunction to shout to the Lord.

But assuming that one day we will be permitted to sing this side of the heavenly choir, it might be good for us to take this break to try and work out what we are actually doing. I suspect that there is nothing that causes more division within a church than the question of music and public singing. I find that in Australia even using the term ‘public worship’ sets some hearts racing and fingers wagging! 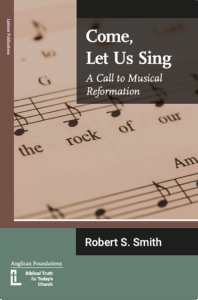 Which brings me on to a superb resource from an Australian writer, worship leader, preacher, thinker, songwriter and musician – Rob Smith. His latest book, Come Let Us Sing, is the result of a lives work on this subject. I have written a more detailed review for The Gospel Coalition Australia so I won’t repeat what I have said there – https://au.thegospelcoalition.org/book-review/review-come-let-us-sing-by-rob-smith/

But I do want to encourage every minister, elder and member to engage with this essential work. Smith states that his intended readership is pastors and teachers, but also music directors, song leaders and church musicians of every kind; as well as Christian congregations. It supplies what is sometimes missing—the psalms, lament, cross traditional fertilisation, and a practical theology of worship.

It would be interesting to know how what theology of worship Presbyterian churches in Australia adopt. I wonder for example how many retain the traditional and biblical practice of psalm singing. By leaving out the psalms we have lost a great resource which has particular resonance for today – they are so emotional, reflective and theological…and they are the Word of God.

What about even the idea of ‘public worship’? Smith argues that Sydney Anglicans have lost something by overreacting to a wrong tradition which saw public worship as only that which took place in a public building called a church. Given that Sydney Anglicans have a strong influence on the whole Australian church scene, including Presbyterians, this is important for us to understand and think about. By losing the language of public worship we may have ended up losing the concept – and to some extent the very raison d’etre of the church. Of course ‘worship’ is all of life – but there is something where the people of God gather together to praise and pray – is that not ‘public worship’? Sometimes overreaction against an error, just leads to a different error.

In Scottish Presbyterianism we saw this in an over reaction against a complex liturgical style of worship. We simplified it so much that we even ended up with what was called ‘the tyranny of the six tunes’ – where in many churches only six tunes were used for the psalm singing. Simplicity has a lot going for it – but sameness does not. For much of my ministry in Scotland I served in a church (the Free Church of Scotland) which had the practice of singing only unaccompanied psalms. There was a lot to be said for that tradition – not least that we learned the Word of God by heart, and we could sing. But I came to the belief that exclusive psalmody was an unbiblical position and stated so. To their credit, instead of throwing me out for heresy, the Free Church took four years (a speedy process in Presbyterian terms!) to look at the issue again and at a special plenary General Assembly, came to the conclusion that the position we should adopt was inclusive psalmody. That is, we would remain a psalm singing church but congregations that wished could also use hymns and spiritual songs – as well as musical accompaniment. Astonishingly the Church did not split over this issue and the change has largely been beneficial. Of course, our sister church in Australia – the Presbyterian Church of Eastern Australia was not too pleased and ‘sisterly’ relations were somewhat strained.

But no matter what we do – the point is that we should think about public worship – including singing – from a theological perspective – not just personal taste, tradition or cultural perspectives. That’s why Rob Smith’s book is so important. Perhaps there are other books out there which you can use – but I would say that every Presbyterian church should take up Smith’s book (or equivalent) and think through biblically and practically what we are doing. Presbyterians should be as known for our public praise (and prayer) as we are for our public preaching. Come let us sing (when we are permitted!) – to the glory of God.

AR – also did this interview with Rob –

Here are a couple of examples from St Peters of congregational praise.   One acapella psalm and one song.

I so miss this…