We live in cancel culture.  “Cancel culture refers to the popular practice of withdrawing support for (cancelling) public figures and companies after they have done or said something considered objectionable or offensive.”   The church is petrified of being cancelled (please note I am not talking here about having our Sunday services stopped because of Covid – but something far more serious)….we are so scared of being defriended by the world that we will do whatever we can to avoid that dreadful fate.     Let’s reflect on that this week – a week in which the General Assemblies of the Presbyterian churches in Scotland normally have their annual meeting.

It’s Assembly time.  Most years for the past 30 years  I have attended in some form or other – the Free Church Assembly and often nipped over the road to the Church of Scotland.  Sometimes these have been times of great joy – at other times, sadly more frequently, they have been times of frustration, discouragement and despair.   In particular, watching the Church of Scotland commit spiritual suicide over this past decade has been one of the most depressing experiences of my life.  ( I have written about these many times – just type ‘Church of Scotland Assembly’ or Free Church Assembly’) into the search engine here. ie A Tale of Two Assemblies 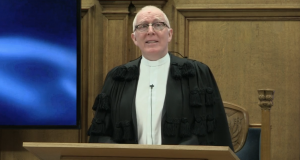 But this year both Assemblies have been cancelled.  What difference does that make?  In terms of the society as a whole, I don’t think it makes any difference.  The general society was not listening to us anyway  – and even if it was we appear to have very little to say!

I was encouraged to see that Rev Martin Fair from Arbroath was to be the Church of Scotland moderator.  Martin has had a full and fruitful ministry in Arbroath.  I am sorry that he will not be moderating over the full Assembly in all its splendour – although he was still installed at a special service which was broadcast on the Church of Scotland website here.

In the Free Church it was to be Neil MacMillan as the new moderator.   A deserved honour.  His church plant, Cornerstone in Edinburgh, is being accepted as a fully fledged church at this Assembly.  However the Free Church has decided not to go ahead with the appointment – because Neil is far too radical!  No – they have decided to stick with Donnie G MacDonald as the ongoing moderator and Neil will take his place in 2021 (DV)….although if Covid 19 continues without a vaccine perhaps we will have to make Donnie G Pope?    His pastoral gifts and talks to the whole church over these past months have been excellent. 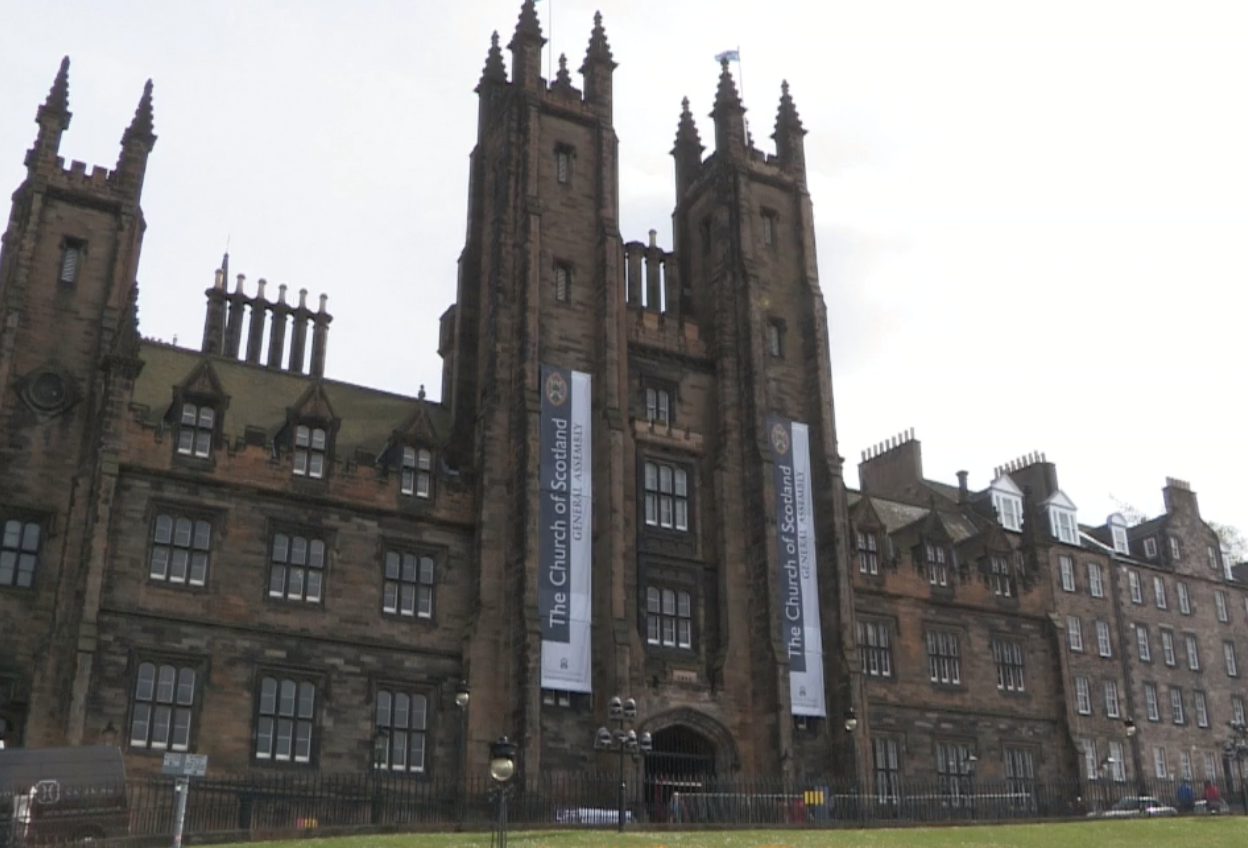 I started reading Assembly reports – but gave up – life is too short.  Some were interesting, some were encouraging and some were depressing and somewhat unrealistic.  So instead of commenting on reports that very few will have read I thought we should consider the wider state of the church in Scotland.  Just as Covid 19 is exposing good and bad things in our culture, so I believe it is doing so within the church.  Covid 19 has put a temporary end on many things – I hope that it will cause us all to reflect on the state of the Church, repent for what we have done and where we are, and ultimately rejoice in a renewed and restored Church.

This video below is an example of how weak and irrelevant the church has become.  The Scottish Parliament has a time for reflection at which occasionally Christians are asked to speak.  Imagine what John Knox, Thomas Chalmers or Sinclair Ferguson would have made of such an opportunity at such a time of crisis.  I’m certain there would have been a call to repentance, prayer and renewed commitment to our Covenant God.  Instead we got this…..

This short video encapsulates much that is wrong with the Kirk today.

It’s unrealistic man-pleasing – “Our nation is beaming love and compassion”.  No it isn’t.  Our nation does have love and compassion.   But there is also anger, hatred, greed and bitterness.   The Church no longer dares to call the nation to repentance. Ministers are like MP’s asking questions in the UK parliament when they get their five minutes of fame – they have to mention their constituency.  One journalist told me that whenever he interviewed church leaders they spent their time telling him how great their churches are – and nothing about Christ.  Maybe they assumed he wouldn’t be interested?  They were wrong.

The minister is not an ignorant man.  He knew what the passage said.  So why distort it?  Why misrepresent it?  Perhaps it was inadvertent?    I can understand Nicola Sturgeon leaving God out – she is not after all a Christian so we should not expect her to behave like one.  But a Christian minister should be expected to teach the Word of God, and not distort it to such an extent that any secular humanist, or any of the politicians sitting in the parliament, could have said exactly the same thing.  Therein lies the problem of the church  – we are indistinguishable from the nice middle class progressive society around us.  We have nothing to say because we are not prepared to be prophetic or to proclaim Christ – except insofar as he is a talisman for what we want to do.   Look at many of the official functions of the Church – the Bible is rarely opened, only lightly referred to and never expounded.  Jesus hardly gets a look in. I listened to a podcast called Holy Smoke today in which the Catholic commentator lamented the fact that his fellow Catholics in Washington DC never spoke about Christ but only about politics.

“you think you may change the church but it is the church that changes you”.

There were a couple of quotes that struck me from the retiring moderator – another evangelical who has served Christ and his church well.  But he I suspect inadvertently laid his finger on the pulse of what is wrong.   He spoke of the role of the moderator as being something that opens peoples hearts.  No it doesn’t.  It’s only the Holy Spirit who can open hearts – not a church leadership role, complete with the clerical robes.     Another was “you think you may change the church but it is the church that changes you”.  In that one phrase, the problem of the church in Scotland has been clearly stated.   We let the institution change, squash and frustrate us.  Evangelicals get to sit at the table – as long as we don’t put anything on the menu.  I think of the evangelical moderator who I was told should be supported because he was going to fight from within for the biblical position on marriage and sexuality – and instead ended up being honoured by a university for advancing the LGBT cause!

It is true that Ichabod is written over the church in Scotland – not just the Church of Scotland.  Although there are individual churches within and outwith the Kirk who have a bright witness.     But overall I believe that the glory has departed.  However I don’t want to leave it there.  Let me take what the minister said to the Parliament and put it in a more biblical perspective.

The problem of being an atheist is that you have no one to give thanks to.  The Christian, being rooted and built up in Christ, is strengthened in the faith and overflows with thankfulness (Colossians 2:7).  We have so much to be thankful for – but outside of Christ, we have no one ultimately to give thanks to.  And we miss the main reason for thankfulness itself – Christ himself.   Maybe if in the church we stopped making it about ourselves and made it about Him – we might experience his presence a lot more?

‘Keep safe’ is not the message of the Gospel.  It’s a cruel message – not a compassionate one.  Why?  Because it is cruelty to ask people to do something which they cannot do.  It’s like saying to a man in a burning house ‘stay safe’.   We need a Saviour.  Who is the One who keeps us safe?  1John 5:18    “We know that anyone born of God does not continue to sin; the One who was born of God keeps them safe, and the evil one cannot harm them.”  Sin and Salvation and Satan are essential and necessary components of the Gospel.  And they are what our country needs to hear…there is evil…and there is deliverance from evil.

I am far more scared of being defriended by Christ than I am by any of my FB friends.  ‘Oh surely not’ you say.   What a friend we have in Jesus.  He would never leave us.  Jesus does indeed call his disciples his friends but we are also told that there are those who live as enemies of Christ.  For example Phil. 3:18 For, as I have often told you before and now tell you again even with tears, many live as enemies of the cross of Christ.  But even more interestingly Jesus says we are his friends if we do what he commands!

You are My friends if you do what I command you. 15 No longer do I call you servants, for a servant does not understand what his master is doing. But I have called you friends, because everything I have learned from My Father I have made known to you. 16You did not choose Me, but I chose you. And I appointed you to go and bear fruit—fruit that will remain—so that whatever you ask the Father in My name, He will give you.… (John 15:14-16)

3 O send thy light forth and thy truth;
let them be guides to me,
And bring me to thine holy hill,
ev’n where thy dwellings be.
4 Then will I to God’s altar go,
to God my chiefest joy:
Yea, God, my God, thy name to praise
my harp I will employ.

5 Why art thou then cast down, my soul?
what should discourage thee?
And why with vexing thoughts art thou
disquieted in me?
Still trust in God; for him to praise
good cause I yet shall have:
He of my count’nance is the health,
my God that doth me save.