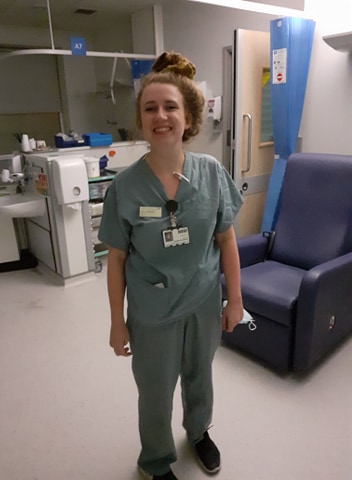 I’m not a big fan of these things, but in this case I will make an exception….happy International Nurses Day!   This is apparently on May the 12th every year – the anniversary of Florence Nightingale’s birth 200 years ago.  Florence of cause was the Christian who was more than anyone responsible for the development of modern nursing.

I love nurses – they are the backbone of our health service.   Besides which my mum was a nurse, (a matron!)and my sister.  I married a nurse and my youngest daughter is a nurse – as are several of the finest people I know.

When I was in hospital in 2011 there were admittedly a couple of not so nice nurses (one I even unfairly referred to Miss Ratched in my delusional state! – possibly the most evil female character in all film history – other than Cruella de Ville!)

But of course the vast majority of nurses are not like that – when I recovered I went back and apologised to the nurse I so maligned – although her colleagues thought it was hilarious.  My experience was that about one-third of the nurses I met seemed to view it just as a job, one third viewed it as a calling, but one they struggled with and one third viewed it as a calling and one they enjoyed!  They would have done the job for nothing if possible.  Sadly it seems to me that the NHS as the institution has taken advantage of the willingness of so many to serve sacrificially.

There are 28 million nurses in the world.  2.8 million in the US, 360,000 in Australia and 500,000 in the UK – with 320,000 of those working directly for the NHS.  In the UK there is currently a shortage of over 40,000 nurses.  The WHO reckon that there needs to be another six million nurses in the world. In the UK the effect of the shortage of nurses is seen in wards being closed and patients not getting proper treatment. In my second home (Ninewells hospital in Dundee) I discovered that wards which could have 24 patients were in reality taking only 18, that expensive agency nurses were often used (in the UK as a whole 80% of staff shortfalls are met by this method) and that some nurses were giving up because of the stress.

The Good and the Bad

The last time I was in for an operation I was speaking to a lovely nurse who was due to retire after over 30 years service.  I asked her what were the main differences good and bad between then and now.  The good differences were better beds and better pain control.  The bad?  “That you know more about the patients in your bay than I do….I spend so much time filling out forms I don’t have nearly so much time to actually nurse – that’s made a whole lot worse when, as often happens, we are a couple of staff short.”

If I was back in the UK I’m afraid that whilst I might have joined in the first ‘clap for the NHS, I certainly wouldn’t be joining in the apparently now weekly ritual ‘clapathon’.  Watching the politicians rush home in their chauffeur-driven cars just to time to be filmed standing outside their front door, showing they ‘care’, is a nauseating spectacle.  Farage, Sturgeon, Corbyn, Johnson and Starmer all join in.  What I wish is something simple.  If they really cared then they would ensure that ALL nurses were given adequate PPE.  They would apologise for not preparing for a pandemic (one of the most foreseeable events), for not having enough stock, for relying on China to provide and for being more concerned about ‘protecting the NHS’ (the institution) rather than providing for the workforce and enabling the NHS (the people) to do their job – caring for the people.

It is shameful that over 65 nurses have died in the UK because of Covid – perhaps some had underlying conditions, perhaps some caught it elsewhere, but I’m sure that there are those who got it because of inadequate PPE and prolonged exposure. Sending nurses into battle without adequate protection is like sending soldiers into battle without adequate weapons.  To the political leaders, I simply say – We don’t care two hoots whether you clap your hands red – or at least until the camera stops – just do your job and ensure that nurses have adequate protection so that they can do theirs!

Rant over.   I would feel this way anyway – but this is also personal.  My beautiful daughter EJ is a Covid nurse in the heart of London..of course, as parents, myself and Annabel are concerned for her.  Each day I would wake up to another Daily Mail sensationalist headline about the latest nurse dying and the armageddon just about to come on Britain.  Between the Mail and Piers Morgan, I’m surprised that anyone in Britain is still alive – if the Covid doesn’t get them, the fear will!  I now ignore both!    As a Christian rather than worry, I just place all my cares upon Him, because He cares for us.  I will never stop praying for EJ and for all her colleagues.

Florence Nightingale was at a hospital near Scutari near Constantinople (now Istanbul) which had a death rate of 42%!  We are concerned about a virus that has a death rate of around 0.1%.  She was hindered in her work by the attitudes of the male doctors who regarded her as a threat.  But throughout her life, she fought for better standards, hygiene and, most surprisingly, she was a statistician who relied on the data. She wrote 17 books!  In honour of her work, she was elected as the first female member of the Royal Statistical Society.   She is best known as ‘the Lady of the Lamp’ because she used to visit the sick and dying at night with her lamp.  To me, she sums up best what a nurse should be – compassionate, passionate, skilful and people-centred.   She describes how as a 17 year old she was called to this by God and was motivated by her Christian faith.

Its the same with our Florence Nightingale.  Whilst I want to thank God for, and honour, all those nurses throughout the world who serve us in this marvellous way, most of all I am grateful for EJ.  As this tweet shows – others have also recognised her talents – I hope one day, like FN, EJ will have a positive influence on a health service that is in desperate need of renewal and reform.  But meanwhile I am thankful she is serving people in the name of Christ, and doing what she can.  A father could not be prouder!

I also hope that many others will take up nursing as a profession – with the right motives and suitable skills.  Incidentally it would be good to see more men involved in nursing – 90% of nurses are female (perhaps the Equalities Commission can get on to that one?!) .    Those of us in the rest of society should seek to  provide adequate support and back up.  Nurses may be ‘angels’ but they don’t do miracles – they need resources. Which means we should not begrudge paying our taxes.   We all love the NHS – but far too many of us want others to fund it.   I remember the late Gordon Wilson having a long discussion with me about this – he believed that a NHS tax would be a better way of funding this essential service.  I’m inclined to agree.