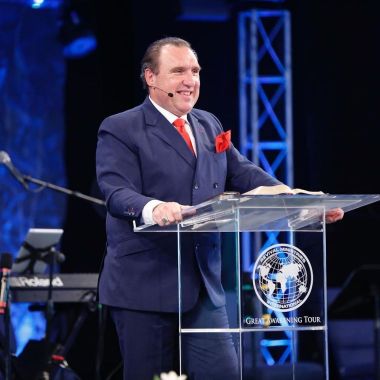 I don’t think the state should be able to close churches. And I shudder at the thought of a pastor in the United States being arrested because he refused to shut his church.

Rodney Howard-Browne, the leader of Revival International Ministries and the River church in Tampa, Florida, is such a man. He was arrested for violating a ‘safer at home’ order, which bans large worship gatherings during the current Covid 19 pandemic.

The Apostle of Laughter

Howard-Browne is perhaps better known as the instigator of the ‘Toronto blessing’ and its particular emphasis on ‘holy laughter’. He even has the self-designation of being ‘The Holy Ghost bartender’.

At first, the news of his arrest made me despair. “Oh no, not another embarrassing ‘evangelical’, making a mockery of the Gospel and causing the name of Christ to be blasphemed amongst the Gentiles!” It was bad enough having to cope with Kenneth Copeland pronouncing that he had driven coronavirus out of the US.

But I thought, maybe that’s not fair? Maybe, as some of my Christian friends will argue, we should not ‘judge’ a Christian brother or sister? Maybe, instead of believing what the ‘MSM’ say about Rodney Howard-Browne, I should find out for myself and give him a fair hearing?

And so, in splendid social isolation, yours truly sat down to watch several hours of Rodney talking about ‘the End of Days’.

The End of Days?

When we are dealing with such a serious subject it was surprising just how trivial and shallow the whole show was. Covid-19, the Word of God, death and eternity were all turned into entertainment. For example, the idea that using the term ‘testicles’ when questioning those who were not prepared to defy the government is somehow ‘daring’, was something you might expect of a 13-year-old teenage boy, not a mature preacher of God’s word.

I tend to think that a preacher of God’s word should, well, you know, preach God’s word. But instead we got a mish mash of political statements, conspiracy theories (‘it’s the Rockefeller foundation) and in house, home spun jokes mocking any who disagree. “CNN and the media need the toilet roll’. His language was, I believe, blasphemous – using the name of God as an exclamation/swear word rather than a prayer to the Almighty. The last thing God’s name is in this circus is ‘holy’.

Like a poor stand-up comedian, he joked callously about those who are afraid of death. It was chilling to hear a preacher in the name of Christ questioning whether anyone was really infected on the basis that he didn’t know any and then suggesting that it was only Hollywood stars and politicians. In other words it’s all a conspiracy.

The Word of God?

Jesus and the Bible hardly got a look-in. The Word of God is reduced to what the Lord allegedly told Howard-Browne, which he is then passing on. Forget the Bible. Forget the words of Christ. Rodney apparently has a direct word. A fire came into the room and hit his belly.

“I’m just telling you what God told me – hype doesn’t last that long but the Word of the Lord shall stand. Either God still speaks to his people or he doesn’t.”

“I asked the Lord what he thought about it (Covid 19) and He said that He wasn’t worried about it.”

What a strange view of God Rodney has. The Bible already tells us that the Almighty God is not ‘worried’ about anything – as though it surprises Him or defeats Him.

Continue listening and you’ll find out that apparently if you take communion, at least in Rodney’s church, you won’t get Covid-19. The Lord said “Every Sunday morning close the service with communion and that will protect my people”. But you don’t have to take communion – you can go somewhere else and eat chicken (cue roars of laughter). And God ‘told’ Rodney that He is sifting his people through their reaction to this crisis, with the implication being that the wheat will defy the authorities, the chaff will close their Sunday meetings (although he has now finally decided to suspend services, it seems).

We even know how long this is going to last, because God told Rodney this was the End of the World (hence the title of his sermon series) – “within three years, maximum seven”.

Again I wondered why the Lord was so vague…didn’t He know? Or is Rodney not due to retire for seven years?

In terms of eternity, those hours spent watching this torturous, embarrassing, banal and blasphemous drivel are nothing – in terms of my life they are hours I will never get back and I hope you appreciate me taking a bullet for the team! It was truly awful (not awe-ful).

Going Against the Bible

But I believe Howard-Browne is going against Christ and his Word in at least three ways. Firstly, it is a direct contradiction of Romans 13:1-2, where we are exhorted to be “subject to the governing authorities” – which have been established by God. Secondly, as Christians we are obliged to love our neighbours – gathering in a large group and possibly being the cause of spreading a virus that kills people can in no circumstances be considered loving.

Thirdly, Howard-Browne is not only rebelling against the Bible, disobeying Christ and being an appalling ‘witness’, he is attacking the precious Bride of Christ, the Church. Just as Covid-19 is a serious threat to the health of the nations, Howard-Browne’s teaching is a virus that seriously threatens the health of the Church. He boasted that he had visited 10 cities in Australia and 40-plus in Europe. May the Lord preserve us from our own stupidity in funding and supporting this nonsense! The teaching as described above is poisonous and harmful – in many ways.

Some Christians still want to rather weakly say, ‘well I don’t agree with his teaching but we shouldn’t publicly go against a ‘brother in Christ’.’ The Bible says differently. “What business is it of mine to judge those outside the church? Are you not to judge those inside?” (1 Corinthians 5:12).

When a preacher is undermining the Church by his words and actions, and endangering the lives and souls of those within and without, it is incumbent on others who are teachers in the Church (the pillar and ground of the truth), to point out their error and as strongly as possible warn about the harm they cause.

Rodney Howard-Browne deserved to be arrested, not because of his appalling teaching about God – that is for the Church to deal with – but because of his blatant disregard for the law of the land and his endangering of human life. There may have been jokes a plenty in his sermon, but it’s no laughing matter.