What a difference a week makes.! Change is occurring so quickly that even when one writes something within a few hours it is out of date. Our world is being taught an enormous lesson in humility.   Last week I preached in St Thomas’s and also launched City Legal – a new lawyers Christian group in Canberra. I suspect that these will be the last speaking events – in front of a live crowd for some time.   By the end of the week I was conducting a talk by Zoom for the European Christian Mission and listening to a service online from St Thomas’s and then in the evening one from St Peters.

This latter was quite extraordinary. Every cloud has a silver lining – and for me to hear my son preach such a profound, deep, emotional and appropriate sermon (on Job) was humbling and thrilling. Have a look at this – and I would suggest passing it on. The singing of the psalm afterwards is beautiful.   Is there anything better than the psalms for helping us face what we are dealing with? 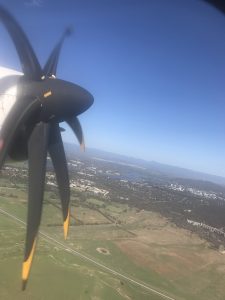 When coming back from Canberra I took this photo from the plane window…it was a beautiful crisp, clear day.  But what struck me about the photo – is that it was not a photo of reality or what I saw.  The propeller looks as though it is not moving – but it was whirring away.  This is a picture of where we are today – it seems as though we are suspended in some kind of limbo – society has stopped – but in reality the world goes on – indeed it is continuing to its final destination – as we are.

Here in Australia we are now entering a kind of semi-lockdown. Travel between the states is restricted, the borders are closed, all pubs, restaurants, non-essential shops, places of worship are now closed.   The schools remain open – although parents are permitted and encouraged not to send their children to school, public transport continues and restaurants and cafes are allowed to do takeaways.   It is difficult to see how this ends in anything other than a significant number of deaths – one of the latest estimates I saw for Australia was an estimated number of 7,000 this year (we currently have 7). However the vast majority of these will be with elderly people who have pre-existing conditions. That is not to demean their death or make it any less significant (I almost fall into that category – an over 50 with a pre-existing condition – as my children keep telling me!) but it should remind us of the most sobering statistic of all – 100% of us will die – whether of coronavirus or not. Last year over 160,000 Australians died. It is not expected that the death rate will rise to any significant degree this year. In the UK over 600,000 citizens died – again it is not expected that there will be any significant rise in the death rate this year.

Those bear facts do not trivialize or minimize the crisis we are currently facing – but they do set it in a wider perspective.   Our society has lived in the denial of our own mortality. We have lived with the illusion that we are the masters of everything and can control everything. Hence the anger and panic when it becomes evident that we cannot.   IN a world of 24/7 news – a world where because of the Internet everyone is an expert – a world where every ‘truth’ is equally valid and yet none is valid except the ones I agree with – we cannot cope with the reality that ‘it is appointed unto man once to die, and after that to face judgement’.

It’s why there are so many angry comments on social media. Its why simplistic solutions are taken as absolutes in a world that is not supposed to believe in absolutes. “How dare you go out for a walk? Don’t you know that we will all die if we don’t remain locked down in your homes?”   “Why doesn’t the government enforce social isolation?” On the other hand there are those who argue that it won’t affect them – “I’m young – I can go party with whoever I want because even if I get it, it won’t affect me”.   The hysteria on the one hand is matched by the selfishness on the other.

I think those governments which act upon the scientific advice and refuse to bow to the hysteria are correct. Those who are shouting for a complete lock down do not know what they are asking for. Scott Morrison was correct when he pointed out that we have to do what is sustainable for a six-month period – not a two-week one. Those who are able to go to their remote summer homes, who live in large houses, who are able to work from home – are not going to be nearly as affected as those who live in small apartments, who have to homeschool children, who have lost their income because they are part of the gig economy. Never mind those who experience domestic violence, who are alone, mentally ill, and suicidal.   Being ‘socially isolated’ sounds harmless enough for some people – two weeks of Netflix and takeaway. I think the longer-term effects for most will be hard to bear. The social unrest that will come should be factored in.  The crashing of the economy will also have enormous implications for health and life.

And therein lies the uncomfortable and unanswerable question. When does the cure become worse than the disease? Right now everyone shouts ‘its saving lives and therefore is a good thing’. But what if it costs lives? The point here is not to argue for a utilitarian numbers game – but simply to point out, as the book of Job does, that in a fallen world, there are no simplistic answers.

Which is of course why we pray. As we realize our own helplessness and lack of solutions we are compelled to fall on our knees and pray.

“Oh God, who knows us to be set in the midst of so many and great dangers, that by reason of the fragility of our nature we cannot always stand upright; Grant to us such strength and protection, as may support us in all dangers, and carry us through all temptations; through Jesus Christ our Lord. Amen” (My reading in the Book of Common Prayer this morning).

May the Lord reveal himself to you, keep you safe and enable you to glorify and enjoy Him,