I once belonged to the Labour party. I was the publicity officer for Edinburgh University Labour club and had on my wall a Labour poster with the words of Amos 5:24 “But let justice roll on like a river, righteousness like a never-failing stream!” something which greatly amused the SNP student publicity officer when he came to negotiate a debate! He outed me as a Christian – and then said that he was Free Church (at the time I was Baptist!).

Although I left the Labour party many years ago I still retained an affection for it, for much of its history and for some of its politicians.   So it is with a degree of sorrow that I have watched its demise into a ‘brutish, authoritarian cult’.   However even knowing what I know about the current Labour party – when yesterday’s news came out I thought it was ‘fake news’, a spoof, an ironic comment from a pro-Labour comic. 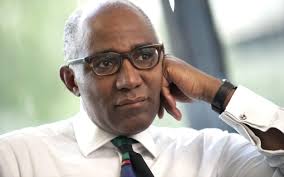 Trevor Phillips, the former head of the Equality and Human Rights Commission has been suspended by the Labour party for Islamaphobia.   Philips, one of the most noted anti-racism campaigners in the UK is in effect being suspended because of his ‘racism’. Has he been a hypocrite? Has he changed his mind and in his later years morphed into a racist?   After all Jennie Formby, Corbin’s hatchet woman, and Labour’s General Secretary, has declared that he has been suspended as a matter of urgency to ‘protect the party’s reputation”. I have two questions. How do you protect a reputation that is already in tatters?   And why the urgency over remarks that were made in public years ago?

The answer to the latter is fairly straightforward. Its called revenge. A party led by a man who has invited advocates of the anti-Jewish blood libel which is being investigated by the Equality and Human Rights Commission, has suspended the former head of that Commission for Islamaphobia. 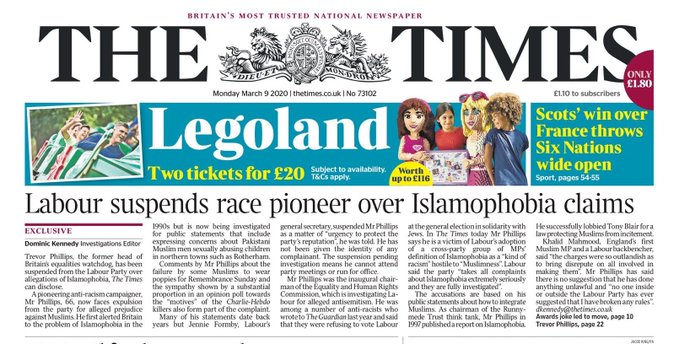 What did Mr Phillips say? He spoke about the Rotherham men who abused at least 1300 mainly working-class girls as being Pakistani Muslims – who were partially enabled to do so because social workers, police and others were scared to tackle the issue lest they be accused of racism. Remember that Labour also got rid of Sarah Champion the local Rotherham MP as Shadow Secretary of State for Women and Equalities for also pointing this out. For Labour avoiding the charge of racism or Islamaphobia was apparently more important than preventing the sexual abuse of working-class girls.

Phillips also made comments about some Muslims not wearing poppies on Remembrance Sunday and about the significant amount of support within the Muslim community for the Charlie Hebdo killers.   None of these statements were false. Nor was the statement that ‘Muslims are different’ (that’s kind of the point of being a Muslim – like being a Christian – we claim to be different!) nor that Muslims were seeking to create a ‘nation within a nation’. Again anyone who knows anything about Islam knows that this is in many cases true. Islam is not just a religion it is a political ideology. There is no separation of mosque and state in Islam.

But whilst Islam IS a religion and a political ideology- it is NOT a race. So how can Phillips be accused of being a racist? Would the Labour party charge anyone who is critical of Christianity with racism? No chance.

There is a deep irony in this latest turn of events. Phillips was the head of the Runnymede Trust when it invented and popularized the concept of ‘Islamaphobia’. Now his child has all grown up and is eating him!

The Labour Party has moved far from its working class roots, largely founded upon Christian socialism. It is now a party of the woke, bourgeois middle class whose idea of social justice is more to do with sexual libertarianism tinged with a flavouring of Green environmentalism, than it is to do with economic justice and real dignity for the poor.   This is a party that is led by people who cannot tell us what a woman is, (witness Dawn Butler’s bizarre ‘babies are born without sex’)  – but they can tell us there are 100 plus genders. A party that boasts about caring for the working class, whilst despising them. A party that cannot tell us when human life begins but does know when it should end. A party that is so ignorant about racism that it ends up suspending a ‘person of colour’ who has spent his whole life fighting racism.

That earlier quote about it being a ‘brutish, authoritarian cult’?   That came from Trevor Phillips. He is right. As was John Lennon – when he summarized perfectly the middle-class progressive attitudes to the working class in his ‘Working Class Hero’.

“Keep you doped with religion, and sex, and T.V.
And you think you’re so clever and classless and free”

It’s a shame that the party of Keir Hardie, Ramsay MacDonald, Clement Attlee, Harold Wilson, Michael Foot, John Brown, Donald Dewar and Gordon Brown has come to this. Is the Party over? It should be.