This week has been a good week from a Third Space point of view. I came to Australia believing that there was an appetite for, and a need for, an application of the Bible to contemporary issues – with the particular emphasis on showing how these issues show us our desperate need for Jesus. This week I saw that in action. 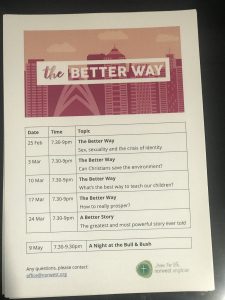 Firstly on Tuesday night I went to NorWest Anglican to do a seminar on sex, sexuality and identity. We were expecting about 40-50 and 160 turned up. It was a good night – a talk for 15 minutes and an hour of interaction and questions. The questions were excellent and challenging – some of them deeply personal. There were two things that stood out – firstly the pressure that so many people are under at work to conform to the current zeitgeist.   And secondly the wonderful way that the grace of Christ reaches into the most difficult of situations. There were a couple of stories I found particularly moving.

The same thing happened at the Village Church weekend away at the wonderful YouthWorks Centre at Port Hacking in the National Park – it was just stunningly beautiful – as some of these photos in this slide show demonstrate.

across the Bay and reading the Word was wonderfully therapeutic.   The Village People were superb – this is a congregation that is a tribute to the glory and beauty of Christ. Obviously it has its problems and difficulties but I was really impressed with the sense of community, the hunger for the Word, the leadership under Dominic Steele, the evident love for Christ and one another, the music and the organization. They also seem to be very tech savvy! Again their interaction and questions was deep, thoughtful and compassionate. A stimulating time.

The theme of this week does seem to be societies obsession with sex and sexuality – several of the questions over the weekend were on this theme. Again it was wonderful to see how the Bible directly applies to, and answers the situations that people face. One question that comes up a lot is along the lines of ‘Given that people used to think that the Bible defended slavery how do we know that in twenty years time we will not be saying the same about same sex marriage?” It’s a common question but not a hard one to answer – if you go deeper. It’s tied in with the devil’s original tactic in the Garden – “Did God really say?” It makes the Bible dependent on what humans say and really reduces the revelation of God to nonsense. It also helps if you know history – the Bible did not justify or commend slavery. The Bible does condemn homosexual practice, along with all other forms of sex outside marriage.

All this was going on at the same time as Sydney was holding its Mardi Gras. In true Romans 1 fashion the corporates, the political leaders, the media and all the arts, sports and legal establishments were doing their best to ensure that their virtue on this societal shibboleth issue was clearly seen.   My observation that this was a victory parade was confirmed when up on my screen came the banners saying “Rainbow Reigns”.   But this new kingdom is already divided against itself and the revolution will eat itself. Everything this week was about preparing the Church to pick up the pieces and show the beauty of Christ in a dark, confused and messed up world.

If you are a Christian may you be enabled to do so this week….if you are not yet a believer – is it not time that you came into the Light?!