I’m not the most practical of people – as Annabel will confirm!   But I like to try.   So when our dismantled bookcases from Dundee arrived in Sydney I thought I would have a go. Much to my shock I managed to put them up and even more shocking they seemed rock solid. Well – at least one of them was. The other one was a bit wobbly but who cared?…it was only a couple of loose screws – what did they matter?    I proudly placed all my books and revelled in my new status as a born again handyman. 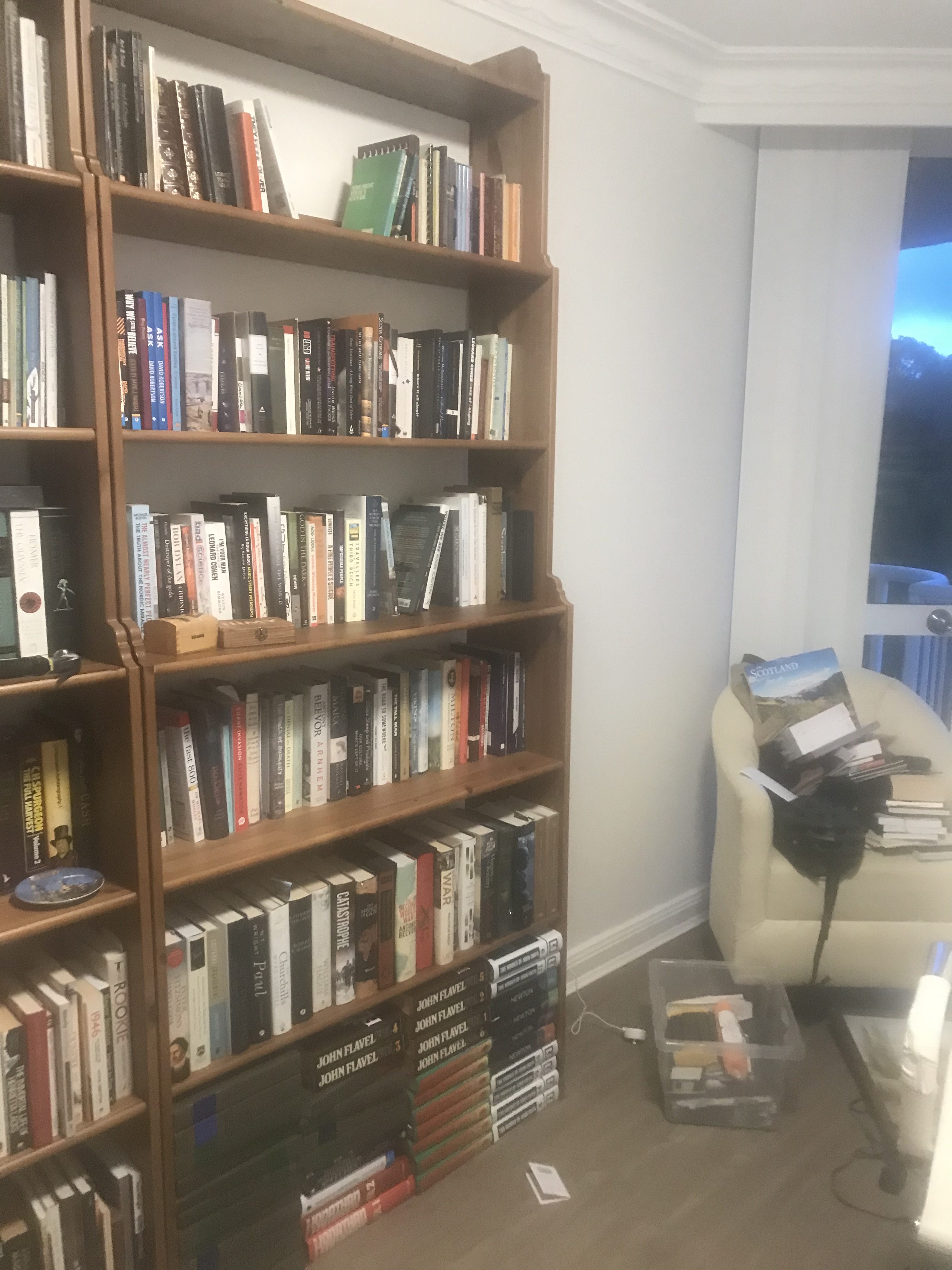 Until a couple of days ago. I came home early and walked into my study, ready to do some home work. I couldn’t believe my eyes.   There were books everywhere and my bookcase was in bits all over the floor. I was gutted. What had caused this unraveling of my good work?   I suspect that a set of John Owen and the Nicene Fathers was probably not the best books to put on top of the thinnest shelf! But whatever the reason the room had to be cleaned and the destruction undone.

So before my good lady returned home I set about repairing the damage. Two hours later a somewhat reduced bookcase was reassembled and most of my books were returned to their home.

I guess there are many lessons to be learned from this.   Pride comes before a fall. We think we are able to fix and sort things – but even at best these are only temporary fixes. Despite all the appearances my bookcase was fundamentally flawed. We live in a broken world – in which the creation groans – waiting for its redemption. We are broken people. I used to say to people who came to St Peters looking for help – our motto is not Coldplay’s Fix You! We are not the healers but we can point to the Christ who is.

I don’t think I will ever get the job my Saviour had – a carpenter! But I am reminded of something my father taught me. When I was a teenager we lived at Nigg above the oil rig yard. My father was a farm worker – which was not exactly a highly paid job. I knew 16 year olds who were living school and getting paid more than him at the yard.   “Dad, why don’t you go and work at the yard? You would get a lot more money”. I will never forget his answer: “Son, yes I would get paid four times as much…we could get a house in town…go on fancy holidays…but I would be miserable. My advice is…if you can, because not everyone has that privilege – do a job you enjoy”. I have never forgotten the wisdom of that advice.

And was reminded of it in Spurgeon’s Morning and Evening for January the 9th – this is an extract:

Those who serve God with a sad countenance, because they do what is unpleasant to them, are not serving Him at all; they bring the form of homage, but the life is absent. Our God requires no slaves to grace His throne; He is the Lord of the empire of love, and would have his servants dressed in the livery of joy. The angels of God serve Him with songs, not with groans; a murmur or a sigh would be a mutiny in their ranks. That obedience which is not voluntary is disobedience, for the Lord looks at the heart, and if he sees that we serve him from force, and not because we love Him, He will reject our offering. Service coupled with cheerfulness is heart service, and therefore true…Do you serve the Lord with gladness? Let us show to the people of the world, who think our religion to be slavery, that it is to us a delight and a joy! Let our gladness proclaim that we serve a good Master.”

I remember speaking to a very faithful and diligent Christian who was leading some church youth work. But he hated it. It was a pressure and a burden. He found no joy in it. He did it out of a sense of duty – which was highly commendable.   But my view was then – as it is now – that it is far better to do our work because we love the Lord and we love his people. Spurgeon was correct. That’s not a excuse for selfishness or emotional flightiness. It’s just that since the joy of the Lord is our strength – if we serve without joy – we either won’t last long or we won’t do a good job. The line attributed to Eric Liddell in Chariots of Fire is apposite – when I run I feel his pleasure.

Him serve with mirth, his praise forthtell….come ye before him and rejoice (Ps 100 1650 psalter).

Have a great week –

Yours in joyful service of Christ,

PS.  Thanks for all your prayers re the bushfires.  We have had several days of rain and many of the fires are out.  Continue to pray that there would be enough raiin to break the drought.  But speaking of joy – this farmer brought a smile to my face…his joy is evident.  May the Lord send spiritual showers as well!