TEXT: For he himself is our peace, who has made the two groups one and has destroyed the barrier, the dividing wall of hostility, by setting aside in his flesh the law with its commands and regulations. His purpose was to create in himself one new humanity out of the two, thus making peace, and in one body to reconcile both of them to God through the cross, by which he put to death their hostility. He came and preached peace to you who were far away and peace to those who were near. (Ephesians 2:14-17) 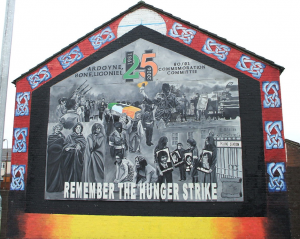 This question comes from Northern Ireland which, for anyone who knows a little of the history of that troubled land, makes it a very understandable question. The ‘Troubles’ in Northern Ireland were often presented as a clash between two versions of Christianity- Roman Catholicism and Protestantism. But it is never just as simple as that. Politics, economics, history, family and tradition were all just as much factors. Sometimes religion was only used as a cover. For example the IRA were supposed to be the ‘Catholic’ terrorists, yet they were a Marxist group which de facto does not believe in God.

There is an old joke about a man in Belfast being asked; “Do you believe in God?”; “No, I’m an atheist”. “But what kind of atheist are you – a Protestant or Catholic atheist?” 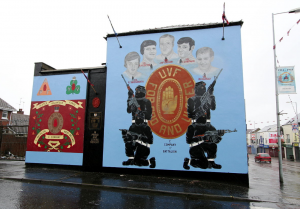 However, it is too simple to say that the trouble in Northern Ireland, or in other troubled parts of the world which involve the church, has nothing to do with Christianity. The Bible teaches that though we are Christians we are still sinners and we are easily affected/infected by the culture we are in. We can also infect the culture. In Northern Ireland there have been biblical Christians who confused their Christianity with their culture and traditions and thus caused great harm to the Gospel cause. All of us can do that.

We need to make sure that we do not confuse the Gospel with the historical, cultural and social impacts upon our society. The Gospel does not change – the culture and context do. There have always been divisions within society and there always will be. In the 1st Century Paul was acutely aware of the division between Jews and Gentiles. He was a Jew who ended up being the apostle to the Gentiles. He had experienced the ‘barrier, the dividing wall of hostility’ and now knew the reconciliation and peace that comes through Jesus Christ.

We must never forget that Jesus comes to bring peace. He is the prince of peace and the preacher of peace. As his followers we have to be the same. There is a wrong use of Christianity that brings trouble and strife. That does not mean that we should reject Christianity. Just as the wrong use of money, family, politics, sport and sex do not mean that we should reject these good gifts from God!

But there is a real sense in which real Christianity does cause or expose division. Jesus said: “Do you think I came to bring peace on earth? No, I tell you, but division.” (Luke 12:51). Here he is not referring to the kind of tribalism and strife that leads to war or fighting between peoples, but rather to the division caused by the reactions to him. His message is a radical one that demands total commitment to him. In a family that may well cause division.

Imagine if you are brought up in a Muslim family and come to follow Jesus Christ – your family could disown you. But its not just in a Muslim family – I have seen secular parents who were so angry that their children became believers that they disowned them. I have seen children seek to get their father put in a mental hospital when he became a Christian! Christ causes division between those who accept him and those who will not.

But that is him really exposing the fact that human beings are enemies to God – and if they have hated Jesus, they will also hate his followers. Those of us who are his followers are not to hate our enemies. Indeed the opposite – one of Jesus’ hardest commands is to love our enemies.

Our battle is not against flesh and blood but against the principalities and powers of this dark world. So we pray for our enemies, proclaim the Gospel to them and love them. God will judge – not us. In this sense real Christianity is the only force in the world that has ever brought real peace. If you want peace in your own life and want to work for peace in this world, you need to be become a follower of the Prince of Peace.

CONSIDER: What causes strife and trouble in the world? How is it possible to bring real peace and unity in a community? Can you think of little ways that you can help bring reconciliation? What role does the Gospel play in this?

PRAYER: Lord Jesus, you are the Prince of Peace. We ask that you would give peace in our lives, families and communities. Where there is trouble, strife and hatred, help us to respond with love. Forgive us when we have been the cause of fights and enable us to know the blessedness of peacemakers, in your name. Amen.