TEXT: For God so loved the world that he gave his one and only Son, that whoever believes in him shall not perish but have eternal life (John 3:16).

God’s response to the big question of suffering – is to give us an even bigger answer! One that will blow your mind. One that even the angels are amazed at. One that will cause you to worship Jesus for all eternity. When Paul wrote to the Romans he explained the cross: why it was necessary, what happened and what the results were. In Romans 5:6-8, he says:  ‘You see, at just the right time, when we were still powerless, Christ died for the ungodly. Very rarely will anyone die for a righteous person, though for a good person someone might possibly dare to die. But God demonstrates his own love for us in this: While we were still sinners, Christ died for us.’

We talk about people giving their lives for others, but that is very rare. We may give our lives for those we love and those who love us. But Paul tells us – Jesus died for his enemies – for those who hated him. The danger is that we say or sing this so often in church that we forget how astonishing it is. Even more when we think about it from the Father’s perspective. God so loved the world that he gave his one and only Son. I have a son and I love him to bits (as well as my two daughters). I could conceive of dying for them. I cannot conceive any circumstances in which I would give the life of my son for anyone – let alone those who hate me! Yet this is what God did. 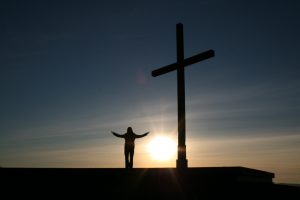 God let Jesus die because he loved us and wanted to save us. How does the death of Jesus do that? Every one of our sins is a sin against a holy God, which deserves his eternal punishment. God is a just God and he cannot simply allow evil and sin to go unpunished. But he is a loving God and so, instead of punishing his people with hell, he sends his Son to suffer our hell for us. So in one moment on earth, the eternal Son of God takes upon himself all our sin and receives the eternal punishment due to us. This is why God let Jesus die. It’s why Jesus agreed to go to the cross. It’s why he prayed in the garden of Gethsemane: ‘Father, if you are willing, take this cup from me; yet not my will, but yours be done’ (Luke 22:42).   It’s why the Holy Spirit did not intervene with ten thousand angels to rescue Jesus.

As for the second part of the question – why doesn’t God just beat the devil? He did – through the cross. God could have defeated the devil by sending him straight to hell. But if he had done so, we would have gone with him because God would also have to punish the evil within us. So how could God remain just and yet justify (save/make right) those who were his enemies? The answer is through the cross. It is the cross that defeats the devil. That’s why Jesus said before he went to the cross, ‘I saw Satan fall like lightning from heaven’ (Luke 10:18).

Satan thought that by killing the Son of God he had won. Instead it was the means of his defeat. ‘ And having disarmed the powers and authorities, he made a public spectacle of them, triumphing over them by the cross’ (Colossians 2:15). C.S. Lewis wrote about this in The Lion, the Witch and the Wardrobe – where the White Witch (and all her and Aslan’s followers) thought that she had won when Aslan laid down his life for Edmund. But there was a deeper power at work … a deeper law. That is exactly what happened at the cross. Satan is defeated, we are saved and God is glorified.

The Lion, the Witch and the Wardrobe – C.S. Lewis

PRAYER: Lord, the cross is a mystery. It is horrible and ugly. It is foolish. It is offensive. And yet it is by the foolishness and offensiveness of the cross that we are saved. So for us, it is beautiful. Father, we bless you that you gave your Son. Jesus, we bless you that you laid down your life for us willingly. Holy Spirit, we ask that you would help us to feel, understand and know the wonder of the cross, in the name of the Father, the Son and the Holy Spirit. Amen.

If you have read the book and would like to review it – can I encourage you to do so on Amazon.  Those who hate biblical Christianity are usually quick to do so…!