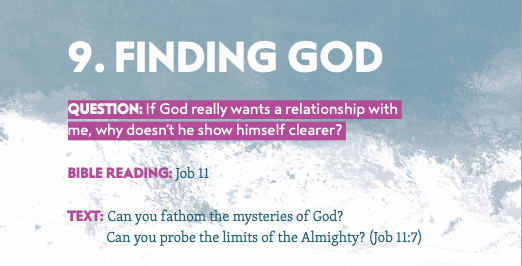 It’s so simple isn’t it? If only God made himself clear then of course we would believe in him! Why wouldn’t we? So it must be his fault in hiding away from us. It’s like he’s playing mind games with us – expecting us to figure it all out.

The words in our text are spoken by a friend of Job called Zophar. You know the story of Job? How he lost everything – his wealth, his family, his status and his health – and now his friend is telling him not to question God – how can you figure it out? Job understandably does not appreciate friends who keep twisting his words and trying to say that he really must be to blame. ‘Job, you are suffering because you must have 44 A.S.K. sinned. Job, do you think that by searching you can find God?’ But Job reacts by saying, ‘Don’t you think that I know God is beyond finding out? I know that!’ ‘To God belong wisdom and power; counsel and understanding are his’ (Job 12:13).

The trouble is, can we know God? Is he too far beyond us? Is he what the theologians call so ‘transcendent’ that we cannot find him or know him? That is certainly what Muslim theology teaches. Allah is unknowable.

The atheist philosopher Bertrand Russell was once asked what would he say if he died and appeared before the God he did not believe in? He replied, ‘Sir, why did you take such pains to hide yourself?’

Friedrich Nietzsche likewise stated, ‘It is a duty of God to be truthful towards mankind and clear in the manner of his communications.’

These might seem clear and obvious statements, but there is one major flaw in them. Can you spot it? What if God has made himself clear? What if, instead of hiding, he has revealed himself? What if the problem is with us, not him? In question 8, we saw that God has clearly revealed himself in what he has made – his eternal power and divine nature have been clearly seen. Hebrews 1:1-3 says, ‘In the past God spoke to our ancestors through the prophets at many times and in various ways, but in these last days he has spoken to us by his Son, whom he appointed heir of all things, and through whom also he made the universe. The Son is the radiance of God’s glory and the exact representation of his being, sustaining all things by his powerful word.’

So God has shown himself. First of all in what he has made. Then he has ‘set eternity in the human heart’  (Ecclesiastes 3:11), so we have an awareness of him. Then, over hundreds of years, he sent his prophets to give us his Word. Finally, as the last revelation of himself, he sent his Son, Jesus who is ‘the exact representation of his being’.

Ah – but you say, that is no use to me because Jesus has gone and I can’t find him. Except that Jesus sent the Spirit, and the Holy Spirit inspired the apostles to write the rest of the Bible and make it crystal clear who God is and what he wants. Even more than that, the Spirit works in our hearts and gives us the light of the knowledge of Christ.

We are without excuse. Even if we ‘just’ had the creation we would be without excuse. But we have so much more. Jesus often said about his teaching, ‘If you’ve got ears, then listen!’ Everyone Jesus spoke to had ears, so what did he mean by this saying? He is asking if they have ears to hear, and are they prepared to listen?

Let’s think about it another way. Maybe it’s God who is doing the searching? Maybe it’s Jesus who came to seek and save the lost? That is the beautiful picture being presented in the gospel. The Son of Man came to seek and to save that which was lost. We seek him, because he is seeking us.

CONSIDER: How do you think that God could show himself more clearly? What obstacles get in the way of our seeing, hearing and understanding?

PRAYER: Father God, you promise that those who seek you will find you. Lord, I want to know you. Surely you have put this desire in my heart? Show me your ways, Lord, teach me your paths, and lead me in the everlasting way. Let me know Jesus. For to know him, is to know you. In his name. Amen.