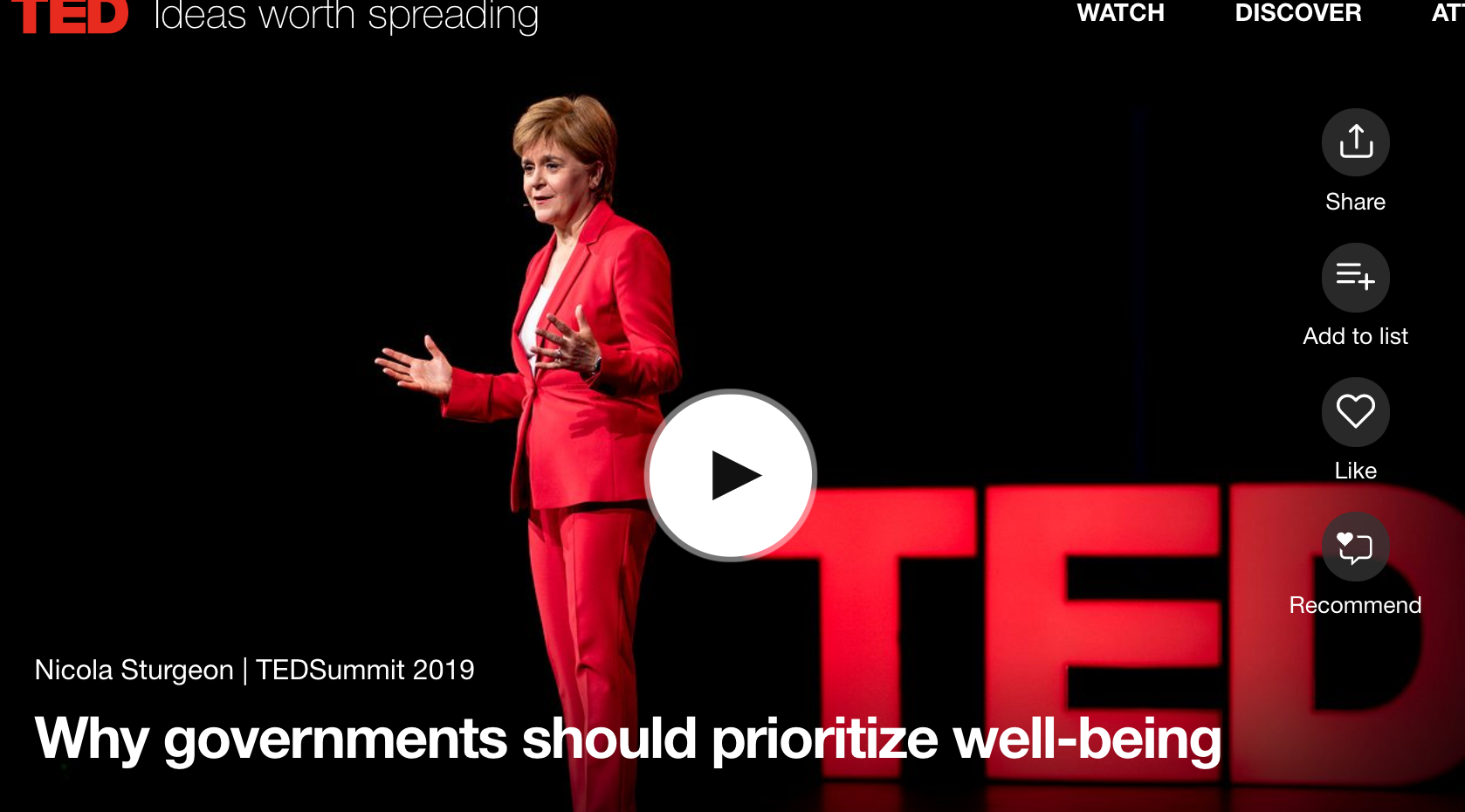 Nicola Sturgeon recently gave a Ted Talk which is interesting, revealing and a real help in understanding where some of our political and cultural leaders are heading.  It’s only ten minutes but well worth listening to…

The message is simple and compelling.  We can no longer measure our country’s success by GDP (Gross Domestic Product).  We need to think about how happy and healthy a population is, rather than just how wealthy is.  We need to focus on well being and ask what really matters to us.  Scotland together with Iceland and New Zealand have started to measure happiness and other factors.  We need, in the tradition of the Enlightenment, need to create a happier, fairer and healthier society.   What a wonderful vision!  As our friend Alastair McIntosh tweeted:

There are many things I would agree with in this talk – as I hope would any biblical Christian.

It is good that our focus is not entirely on economic well being – and that Mammon is not our idol.  Man (or woman) does not live by bread alone.  It is good to see that at least in this the FM is following Jesus.

It is good that we focus on areas such as health in general and mental health in particular.

It is good that we look for a happier, healthier and juster society.

I have no doubt at all that the FM means what she says –  but the problem is that this speech actually says very little.  It is not the fluent, cogent and life-giving vision that Alastair exults in.  It is not the Gettysburg address.  It is not the Sermon on the Mount.

If there had been a question time at TED (which there usually is not because TED talks are secular sermons delivered from on high to a worshipping congregation and cannot be questioned) then I would have asked the FM the following questions.

What do you mean by happier, healthier and fairer?

Its as though she is offering to use a tape measure with no measurements.  Who is going to be opposed to these things? They are easy words to say but really hard to define.  I suspect that the FM is a bit like Humpty Dumpty in Alice in Wonderland

Happiness, healthiness and fairness are all defined by our government.  If we don’t accept their values then we are not ‘Scotland’.  We are healthier, we are happier, we are a more just society – we must be, because the government says we are.   To be mistress – that is all.

From my perspective, Scotland under Sturgeon’s government is becoming a more miserable, sicker and unjust society.  We have just had the announcement that we are now the drugs death capital of the world.  Mental ill health is on the rise.  The gap between those who live in Morningside and Bearsden compared with those who live in Drumchapel and Charleston (Dundee) is as large as ever – if not increasing.  The NHS is heading for a major crisis which will affect the poor more than ever.  Schools engage in social engineering rather than education – again affecting the poor more than anyone.  Shouting “it’s the Tooorries’ works well for the political troops – but doesn’t take away from the reality that even by her own standards the FM is presiding over a country that fails on all these levels.

Why do you say that economics are not the only or even the main criteria and yet your arguments against Brexit are all about economics?

There is a great hypocrisy here.   Every day we hear from the Scottish government what a disaster Brexit will be – and yet that ‘disaster’ is only expressed in economic terms.  It is hypocritical not just because of this talk but also because it is highly likely that using the same criteria would mean the SNP would no longer support Scotland leaving the UK – which is after all far more important economically to us than the EU.   Yet the SNP would (at least in theory – although in practice that is becoming less likely) be prepared to pay that price in order to get the greater prize of independence.

It is interesting that in the follow up session Sturgeon, apart from mocking Johnson (again sowing the seeds of ‘division’ – the ‘them and us’ absolutely essential to any virtue signalling moralists !), says that independence is about self-government.  But she knows that her policy of Scotland being in the EU is about the giving up of self-government in order to have a seat at the supranational collective corporate EU table.

What really does matter for our country?

There are many of us who feel disaffected and alienated – precisely because we do not share the FM’s narrow, fundamentalist, progressive views.  We think that it does not add to the health and happiness of the weakest to kill them in the womb. Nor incidentally, does it help the wealth or population of the nation compelling the government to plead for more immigrants to cover the population loss!   We don’t think it adds to the health of the family to promote a view of marriage which turns it solely into a civil contract.  We do not think that Sturgeon’s obsession with the identity ideology which her government proposes to enforce through their Gender Recognition Act is healthy or will promote happiness.  Telling our children that gender is a social construct unconnected with biology, is not only scientific illiteracy, it is also state-sponsored child abuse.

It’s all very well to boast about the three countries having three women prime ministers but the FM proposes to make the term ‘woman’ meaningless.  Under her legislation, Boris Johnson could just announce that he is a woman and she would have to accept him as part of the gang of female leaders who are civilising the world.

We don’t think that it makes our fishing communities happy that the number of fish they can catch is determined from Brussels. We don’t think the increased waiting lists, or the exodus of qualified doctors and nurses from our NHS – adds to our happiness and health.   What about the food banks?  the drug deaths? the lack of work in our housing schemes?  the hopelessness and helplessness felt by so many people?

Are you aware of what Adam Smith said about Christianity?  Or John Gray says about the Enlightenment?

Sturgeon, like many others, has a somewhat simplistic view of The Enlightenment – which in its Christian forms did being a great deal of light, but in its non-Christian forms was also responsible for great darkness. The atheist philosopher John Gray in his book Black Mass offers an alternative view of the Enlightenment, suggesting that Hitler and the Third Reich were its consummate end product.    Adam Smith, the Scottish inventor of modern capitalism, argued that without Christianity capitalism would be destructive and horrendous.

The FM in seeking to build a society without God is attempting the impossible.  Every such attempt has ended with hell on earth.  Why should Scotland be any different?

Looking for happiness, health (of every kind)  and justice without God is like looking for equality whilst seeking to remove the foundation upon which that equality is based – the biblical teaching that all human beings are equally made in the image of God.

“We hold these Truths to be self-evident, that all Men are created equal, that they are endowed by their Creator with certain unalienable Rights, that among these are Life, Liberty, and the Pursuit of Happiness… (Jefferson)

You spoke of sin.  Do you believe in sin?  What about holiness?

Sturgeon referred to her wee alliance of Scotland, Iceland and New Zealand as the SIN countries.  It’s a neat joke (I think).  But it did set me thinking about a deeper truth.  Scotland was once known as the people of the Book.  Not any more.  What does the Book say?   “Righteousness exalts a nation, but sin is a reproach (condemns) to any people” (Proverbs 14:35).

That is my great fear.   We are led by a First Minister who, although well-meaning, has such a lack of self-awareness, that she believes her own myths.  Scotland is not progressing towards a secular Nirvana – we are heading into the ‘reproach’ that alienates us from each other – because we are alienated from God.  Thinking they were wise – they became fools.

Only repentance, reformation and revival can lead us to real well being – real justice, real joy and real life.  It is the words of Christ that are ‘life giving’ not the messianic dreams of Sturgeon.   Like Joshua we all need to choose this day who we will serve.  Some will believe and follow the Sermon on Ted – but as for me and my household – we will follow the Sermon on the Mount!

The Ultimate April Fool – An Open Letter to Nicola Sturgeon