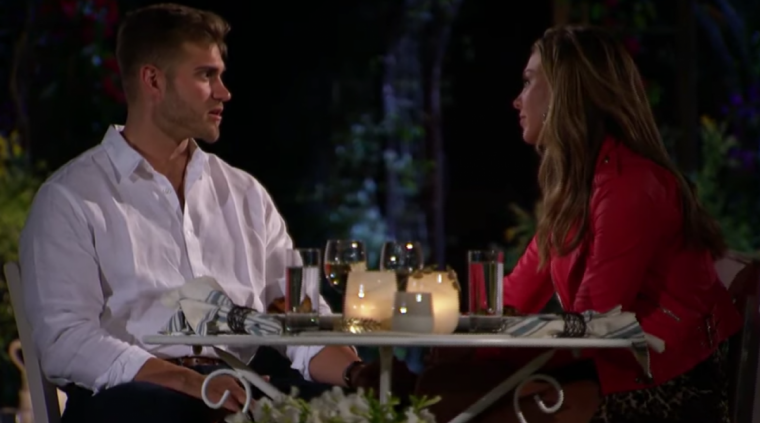 What a strange and different world we live in – the world of reality TV, social media and disintegrating foundations. There are some wonderful programmes on TV that make you glad to be a human being – and there are others that make you understand why the Lord destroyed Sodom and Gomorrah.

An example of the latter is The Bachelorette. I confess that I would rather have a leg wax than watch this, but duty called!  I had heard of a controversy involving two professing Christians on the show and so decided to watch a couple of the episodes.

Whilst I could appreciate the garish fascination, a bit like watching a car crash, the main thought that came to mind was why would any Christian watch, let alone take part in, this exploitative, shallow and hedonistic voyeurism?

The incident that has, much to the programme makers’ delight, caused the greatest fuss is a conversation that occurred between the two Christians, Luke P and Hannah B. Luke wanted to talk about sex and began by saying that the marriage bed should be kept pure (citing Hebrews 13). Hannah B took offence and responded by saying that she had had sex on the show and justified that by declaring, “I’ve had sex and Jesus still loves me”.

She went on to add:

“I feel judge and shamed.”

“I can do whatever, I sin daily and it’s all washed…and if the Lord doesn’t judge me, nobodies judging me.”

In a further interview she went on:

“I have to figure out who I am and not anyone judge that….”

“I know who I am and whose I am…I don’t want to be judged for that because nobody should be judged for what they do – we are supposed to love one another”.

The whole controversy is an insight into some aspects of Christianity in the West today and shows how a misunderstanding or misapplication of Christian teaching can become anti-Christian.

Three of these pop-theology doctrines are evident in this conversation:

1. If you love someone you don’t judge them.

Hannah declares, as do so many, that no one can judge her. There are two problems with this. Firstly, Hannah contradicts herself by judging Luke for judging. It appears that the only sin left in the judgmental list is judging. Secondly, as a professed follower of Christ she forgets what he has to say about the subject.

John 9:39 Jesus said, “For judgment I have come into this world, so that the blind will see and those who see will become blind.”

Jesus is the one who judges. He separates the sheep from the goats. He is also the one who came to save us from the righteous and good judgement of God. Love and judgement are not diametric opposites.

It is the work of the Holy Spirit to convict us. To make us aware of our sin. When we declare ‘no-one is going to judge me or make me feel guilty’ we are denying the work of the Spirit.

John 16:8. “When he comes, he will prove the world to be in the wrong about sin and righteousness and judgment.”

Those who appear on ‘reality’ TV have their every word recorded and judged by the audience. But there is a far greater judgment coming – which should cause all of us to think about what we say.

Matthew 12:36 says: “But I tell you that everyone will have to give account on the day of judgment for every empty word they have spoken.”

2. Jesus died for my sin; therefore I can sin as much as I want.

This is a misunderstanding and misuse of the doctrine of grace. It’s an old heresy – ‘let’s do evil that good may result”. It is the idea that the more I sin the more God is magnified in forgiving me. So when I sin I’m really doing God a favour. Paul’s answer to this was short and to the point: “Their condemnation is just!”

If we love God. If we know what Jesus has done for us. Then we will obey him. If we have this hope, we purify ourselves – not abuse ourselves and others. “In fact, this is love for God, to keep his commands” (1 John 5:3).

When we boast that we sin and that we have no intention of keeping the commands of God, we are in reality testifying that we do not love God. We love ourselves. God is just a convenient excuse. Grace is unknown for whom the only reality is themselves.

Hannah declares, “My faith has grown so much and I realize what the relationship with the Lord is really about.” But she clearly doesn’t. She thinks that relationship is all about her – who she is and what she wants. The faith she has is in herself and her own personal Jesus – someone to hear her prayers and gives her what she wants. Faith in Christ doesn’t get a look in. Pop theology is what happens when you apply pop psychology to the Christian faith.

There is a sense in which I feel sorry for Hannah and don’t blame her. This approach is the product of a Christian sub-culture which encourages narcissism and superficiality – a culture which confuses love with lust and substitutes faith in Christ with faith in yourself.

This is the kind of understanding that comes from the soundbite feel-good theology being taught from the pulpit and through Christian media. It teaches that we don’t have to think, feel ‘negative’ emotions like guilt, or face the difficult task of living our faith in a culture that despises it.

But those who adopt this cultural Christianity end up not knowing Christ, not being able to love (because they have no depth) and caving into the culture. Sermonettes make Christianettes and Christianettes make Bachelorettes.

Christianettes will never find the love that is so wide, deep and high that it would take an eternity to bathe in it. Let’s look to the reality of Christ, not the superficiality of ‘reality’ TV.

Is the Church in the UK a sinking ship? Christian Today