We live in strange and momentous times.   An extraordinary opinion poll this 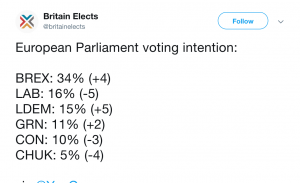 past weekend showed The Brexit Party gaining more votes than the conservatives and Labour combined.   And this was not an outlier. Why is this happening?  There is a genuine upset and anger of the politicians to deliver what they promised.  They promised that our votes would matter and that the results of the referendum would be enacted (they, of course, did not expect the people to vote for Brexit).  At the last general election, 80% of our MPs promised that the result of the referendum would be enacted.   The fact that it has not happened is not because it is impossible – but because 75% of our politicians do not want it to happen.  They have lied, been weak and shown a hubris and inability which has been astounding.  Therefore many people (including some who voted Remain) are turning to the Brexit party.   Nigel Farage, whatever your views may be about his personality and policies, is as an astute a politician as Alex Salmond.  The Brexit parties publicity, launch and rallies have been professional, slick and streets ahead of any of the opposition – especially ChangeUK who look amateur in comparison.

The failure of the politicians to get us out of the EU has resulted in humiliation for the UK, an extension being begged for, and because of that the UK has to take part in the EU elections on May the 23rd.  So I am sitting here with my postal vote.  How will I vote?

I can’t vote for the Conservatives – they have shown a level of incompetence and hypocrisy which is breathtaking.  Prime Minister May has shown hubris and made continual promises which she keeps breaking.   She has shown no understanding of the EU and her attitude towards immigration is in my view disgusting.  If you want to see how badly she and her team have done just watch the Storyville documentary “Brexit – Behind Closed Doors”  The EU negotiators treat Britain with contempt and even boast about how they are making Britain a colony.  Olly Robbins – one of May’s key negotiators actually tells Guy Verhofstadt that he wants to become a Belgium citizen.  These are the people in charge of Brexit!  Such is their hubris that they think people will vote for them anyway just to stop Jeremy Corbyn!  No wonder they are sitting at 10% in the opinion polls.

But the Labour party are not much better. They have tried to straddle the fence.  On the one hand, you have the middle-class Blairite socialists who are fanatically pro-EU.  On the other, you have the traditional working-class Labour MPs and voters who largely voted Brexit.  The Labour party is moving away from its traditional roots so I suspect that in reality, their real position is that of Remain.  On Monday Tom Watson declared that Labour was “a Remain and reform party”. But Barry Gardiner, the shadow international trade secretary, has said: “Labour is not a Remain party now”.   Confused?  Anyway, I can’t vote for Labour because Lord Adonis, one of their candidates publically declared, ‘if you are for Brexit, don’t vote Labour”.  So I won’t.

The party I voted for last time has also told me not to vote for them.  Nicola Sturgeon has said that a vote for the SNP is a vote for a second EU referendum.  I ain’t voting for that.  Not least because as someone who voted Yes in the Indy referendum I realise that Sturgeon has dealt a possibly fatal blow to the idea of Scottish Independence by supporting a ‘confirmatory’ 2nd referendum.  This is explained well in this article – Want Scottish Independence?  Vote Brexit party. 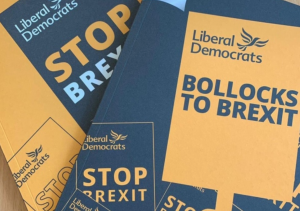 The Lib-Dems are another party I have voted for in the past.  It’s bad enough that they have Guy Verhofstadt campaigning for them, but their attempt at ‘cool’ politics and appealing to the ‘youf’ vote,  ‘Bollocks to Brexit’, is juvenile playground politics.

I once voted for the Greens in an EU election.  Never again.  They are to the Left what UKIP is to the Right – so extreme that I could never vote for either.

So that leaves me only one choice – a spoiled paper or the Brexit Party.  Because the Brexit party have no policies other than Brexit…as Claire Fox (the former revolutionary communist who I actually admire to some degree) is one of their candidates –  because David Lammy, Gavin Esler and others keep calling me a racist –  because I support being out of the EU- because they have a more diverse group of candidates than any other party…..and because the SNP keep telling the world that they speak for me and the million other Scots who support Brexit – I have done a protest vote.  (My prediction by the way is that Scotland will send a Brexit MEP to Brussels – I hope the SNP realise what they have done!).

As an example of the professionalism and diversity of the Brexit party here is their election party political broadcast.

I hope that those who seek to dissuade by mocking and yelling ‘fascist, Far Right’ will wake up and see where they are pushing people.  It’s about democracy.  That is far more important to me than being in or out of the EU.   Stopping Brexit is likely to mean the end of any meaningful democracy in the UK.  Like millions of others,  I would see little point in voting if our votes can just be ignored.

These are historic days.  The Conservative party could be destroyed.  The UK could have a former Marxist as Prime minister.  And the Far Right (and Far Left) could find themselves with influence and power in the UK…What a mess!  What we reap we will sow.   Lord, have mercy!

Footnote:  It has been pointed out to me that the Brexit party have no policies.  That is the point.  If they had policies I would probably not agree with half of them.  This is a protest vote for a protest party in an election that should not have been held.  80% of our politicians promised this election would not happen – either through incompetence or dishonesty – they have not kept their promise.