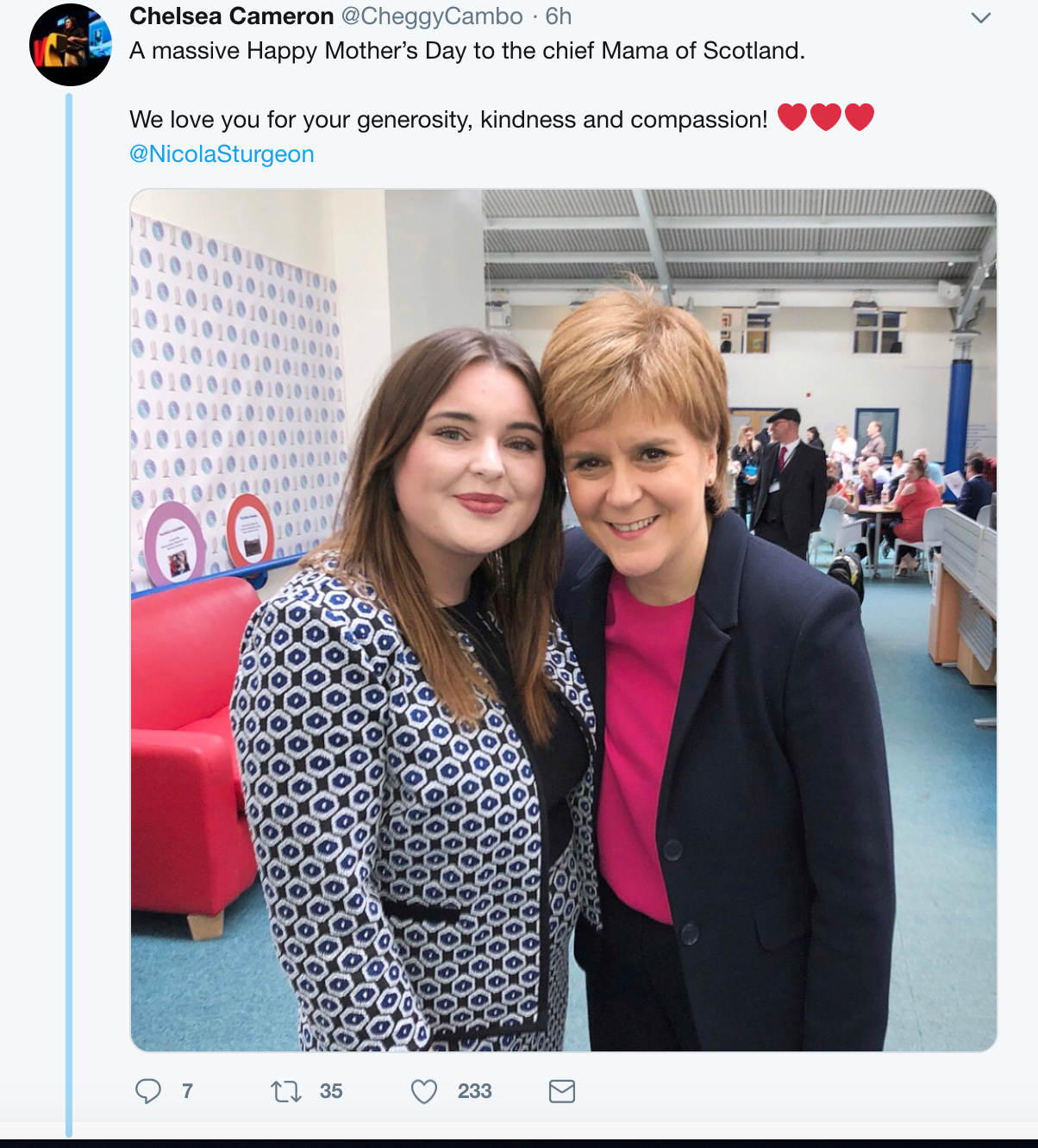 Last Sunday on Mothers Day – this tweet was posted – and retweeted by politicians and others. 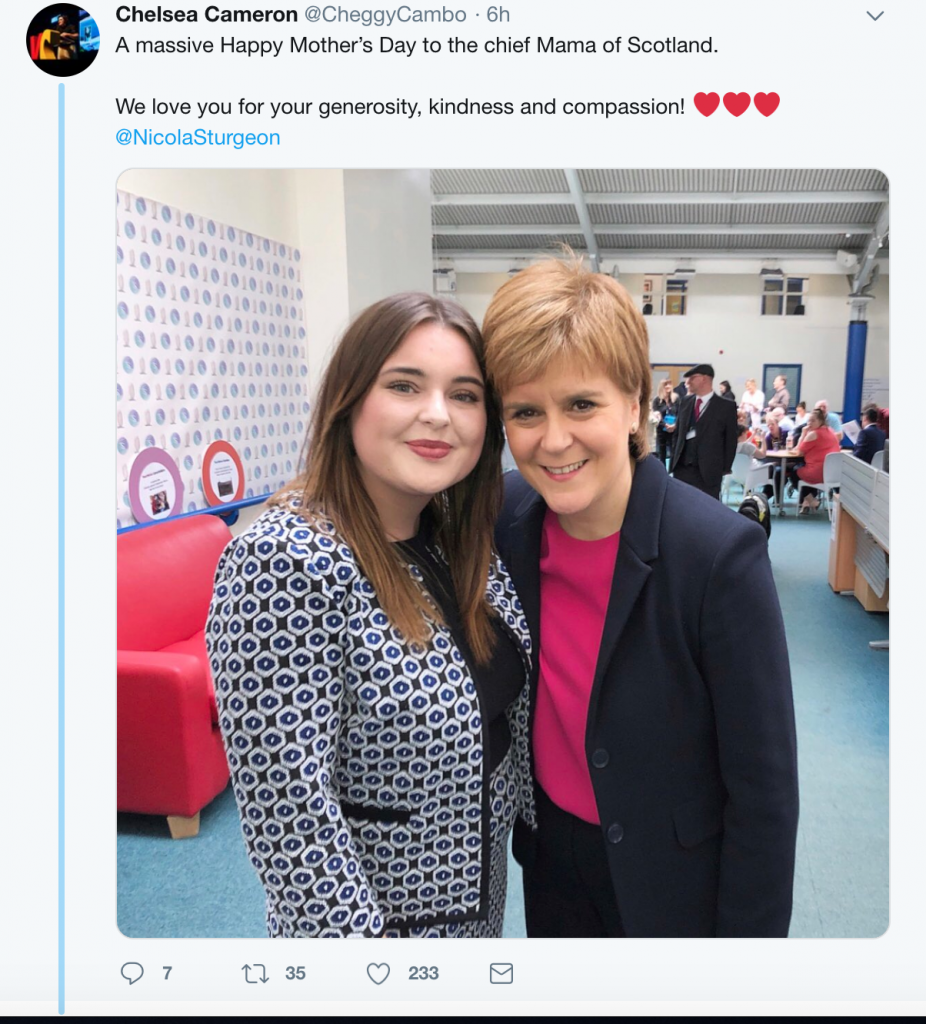 Although many people have a knee jerk reaction to the First Minister and her photo-ops (supporters love everything she does; detractors, to use an old Scots phrase, find that such things ‘gie us the boke’!). It’s better to try to avoid such reactions and take a cooler and more rational approach.  In this regard I don’t have any doubt that Nicola Sturgeon does take seriously her role as ‘ chief corporate parent’ – (note that this is the technical term for the person, the FM, who has overall responsibility for the 17,000 plus children in care in Scotland – I think its a necessary and important thing).   She has a genuine interest and compassion.  It is churlish to deny that.   I also think that her interest is an encouragement and help to some of those children and young people.  Kudos to her.

Nonetheless this does not take away from the fact that the corporate term has morphed into ‘Scotland’s Chief Mama’ or sometimes “Scotland’s Chief Mummy”.   Perhaps it would help to explain why I find it creepy if I suggested to you that Donald Trump was ‘America’s chief Daddy”?  Who’s the Daddy?  Who’s the Mama?  The endless photos and  pictures of our caring leaders does stick a bit in the throat.  However for me it’s not just the image but the ideology behind that image which increases the level of concern.

Herein lies the biggest problem.  In a democracy with a pluralistic political culture, a large and diverse civic body, a healthy media, and balancing political parties and institutions, this would not be a problem.  But in todays Scotland this is a very disturbing image.    Because Nicola does believe that by legislation she can parent the whole of Scotland.  The Scottish Government whilst not going totally Kimesque in its North Korean mould, does however seem to be creating an authoritarian regime which requires either the cult of the Great Leader or the perfect Party that speaks for the whole nation (how many times has Ian Blackford stood up in the House of Commons and said ‘Scotland says,’ when he means ‘the SNP says?  The equation of Scotland with the Party is disturbing).

The disturbing and chilling thing about the Scottish government approach is that they seem to believe they can cure all human ills, simply by their will as expressed through legislation.  Never mind just simply maintaining a functioning government, they are going to save the world – or at least the EU or the UK as well as making Scotland the most progressive country in the world!   ‘Progressive’ politics leads to a delusional belief that Nirvana is just around the corner.  Elect us and things can only get better.

Witness for example this policy that came into being yesterday. This time it is  the Scottish government policy plan to eradicate domestic abuse.

If you’re worried, you can call 0800 027 1234 to speak in confidence to Scotland's 24 hour Domestic Abuse Helpline. pic.twitter.com/dBt4KMlyvU

What’s wrong with that?  Surely everyone wants to stop domestic abuse?  Indeed but can you legislate to eradicate wrong (sin) or just contain and deal with its consequences?   It’s a hopeless hubris to think that legislation will end abuse.   And inconsistent.  Note how the First Minister speaks about ‘coercive and controlling behaviour’ being against women.  She seems to have no acknowledgement that any woman could ever be capable of ‘coercive and controlling behaviour’.  I’m tempted to suggest that looking in a mirror (at least in political and societal sense) would help!  After all it’s hard to think of a more coercive and controlling organisation in Scotland today than the Scottish government and its acolytes.  Its tentacles reach into every aspect of life; education, the arts, health care, media, the church, business, sport and of course the family.

This is where the confusion of Nicola Sturgeon now does so much harm.  On the one hand she genuinely wants to care for those who come from broken homes or find themselves without a home.  On the other she does not realise that many of the policies she puts forward, and the ideology on which they are based is a primary cause of those children being in care in the first place.

One of the foundational, if not THE foundational, stones of our culture, is the family.  The trouble with the new Progressive ideologues is that they say they believe in and support the family – but they redefine family so as to become almost meaningless.  They redefine marriage, declare that gender is a social construct and believe that the State is a better parent that most parents.  For example the fanatical ideological support for abortion (even to the extent of offering to abort babies from other countries for free), fatally undermines the right of the child within the womb, and will lead to a disregard for the infants outwith.  Abortion is a prelude to infanticide – and often creates an attitude in which the infant, incapable of living autonomously, is regarded as a lesser human being than the rest of us.

Robin Aitken (The Noble Liar) points out: “social engineering pursued in the name of dangerous and half-baked theories , will, at some point, create a backlash”.  Nicola Sturgeon and her government are basing their policies on unresearched and half-baked theories.     Let me cite from the Linacre Quarterly, published by the US National Library of Medicine, National Institutes of Health:

“nearly three decades of research evaluating the impact of family structure on the health and well-being of children demonstrates that children living with her married, biological parents, consistently had better physical, emotional, and academic well-being. Paediatricians and society should promote the family structure that has the best chance of producing healthy children. The best scientific literature to date suggests that, with the exception of parents faced with unresolvable marital violence, children fare better when parents work at maintaining the marriage. Consequently, society should make every effort to support healthy marriages and to discourage married couples from divorcing.”

The Establishment Progessives view is summed up by the most senior family judge in England Wales, Sir James Munby – speaking  in May 2018.

“Children live in households where their parents may be married or unmarried.  They maybe brought up by a single parent, by two parents or even by three parents.  Parents may or may not be their natural parents… Many adults and children, whether through choice or circumstance, live in families more or less removed from what, until comparatively recently, would have been recognised as the typical nuclear family. This, I stress, is not merely the reality; it is, I believe, a reality which we should welcome and applaud.”

Whilst Nicola and her establishment allies are applauding – the number of children in care, with mental illness and suffering in other ways increases.

Meanwhile the Scottish government are in the process of turning what was once our world class education system into an instrument of the State used largely for social engineering.

My fear with the whole ‘Chief Mama’ approach is not that it reflects a genuine compassion and concern for children in care.   My fear is rather than it reflects a view of society in which the State is Big Brother, and those who run it do see themselves as corporate parents.  The trouble is that those of us who don’t accept the benevolent all-encompassing State,  will find that our corporate parents can be as brutal, coercive and controlling as any abusive parent.  Mama doesn’t always know best.  But she thinks she does.

The following was an April fool that had a serious point!

Letter from Nicola Sturgeon Calling for a National Day of Prayer