I have begun a new column writing for Evangelicals Now – they asked me to explain why I was going to Australia for my first one.  It has just been published in the April edition – full text below…

Whilst undergoing some research into my predecessor in St Peters Dundee, Robert Murray McCheyne, I came across a report about a ship that was leaving Dundee with a mixed cargo that included criminals who were being banished to ‘the colonies’. For some reason this came to mind when the editor of EN asked me to write about why I hope to go to Australia for a couple of years. 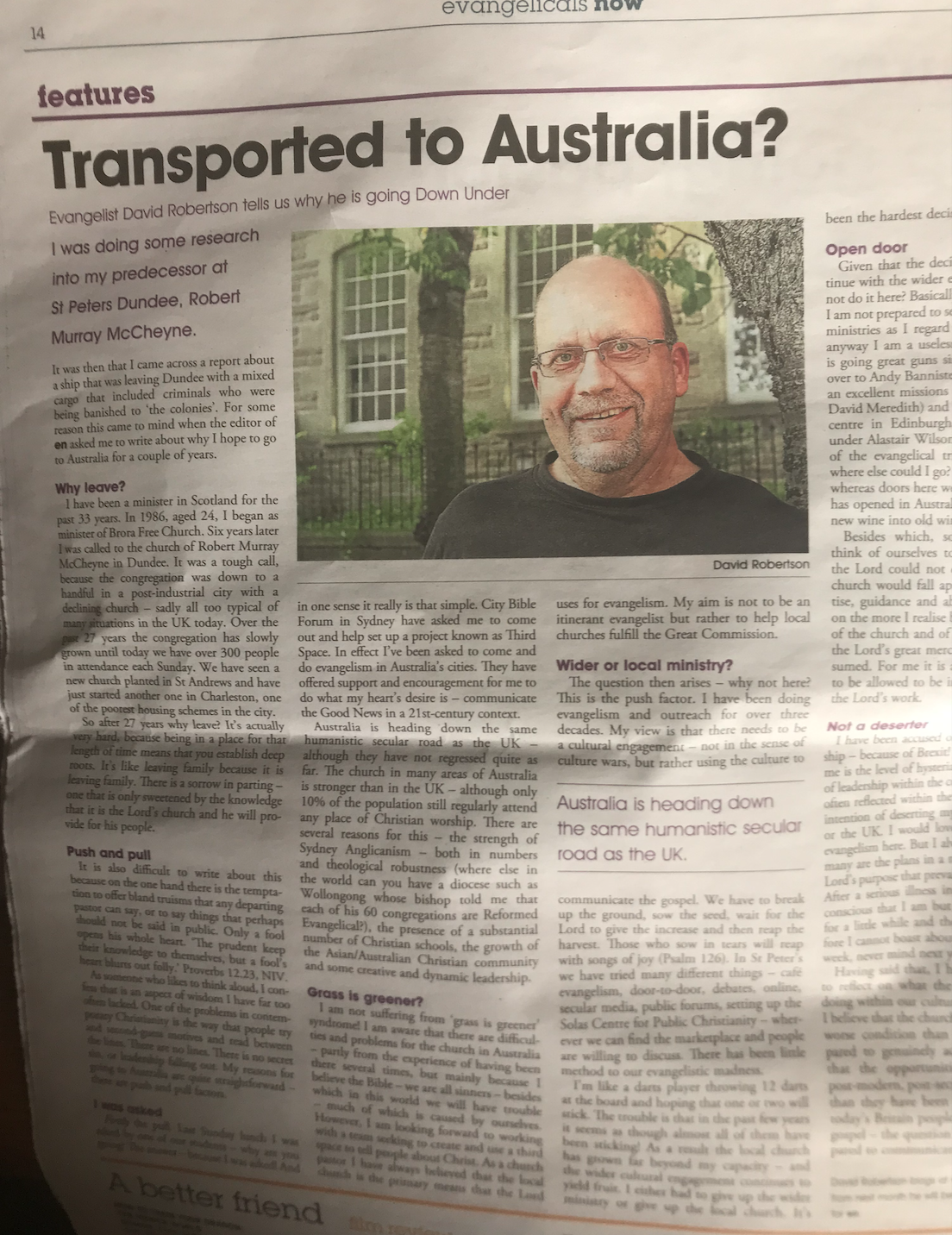 I have been a minister in Scotland for the past 33 years. Aged 24 I began as minister of Brora Free Church in 1986. Six years later I was called to the church of Robert Murray McCheyne in Dundee. It was a tough call because the congregation was down to a handful in a post industrial city with a declining church – sadly all too typical of many situations in the UK today. Over the past 27 years the congregation has slowly grown until today we have over 300 people in attendance each Sunday. We have seen a new church planted in St Andrews and have just started another one in Charleston, one of the poorest housing schemes in the city.   So after 27 years why leave? It’s actually very hard because being in a place for that length of time means that you establish deep roots. It’s like leaving family because it is leaving family. There is a sorrow in parting – one that is only sweetened by the knowledge that it is the Lord’s Church and he will provide for his people.

It is also difficult to write about this because on the one hand there is the temptation to offer bland truisms that any departing pastor can say, or to say things that perhaps should not be said in public. Only a fool opens his whole heart. “The prudent keep their knowledge to themselves, but a fool’s heart blurts out folly.” (Proverbs 12:23, NIV). As someone who likes to think aloud, I confess that is an aspect of wisdom I have far too often lacked. One of the problems in contemporary Christianity is the way that people try and second-guess motives and read between the lines. There are no lines. There is no secret sin, or leadership falling out.  My reasons for going to Australia are quite straightforward – there are push and pull factors.

Firstly the pull. Last Sunday lunch I was asked by one of our students – why are you going? The answer – because I was asked! And in one sense it really is that simple. City Bible Forum in Sydney have asked me to come out and help set up a project known as Third Space. In effect I’ve been asked to come and do evangelism in Australia’s cities. They have offered support and encouragement for me to do what my heart’s desire is – communicate the Good News in a 21st Century context. 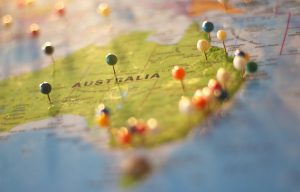 Australia is heading down the same humanistic secular road as the UK – although they have not regressed quite as far.  The church in many areas of Australia is stronger than in the UK – although only 10% of the population still regularly attend any place of Christian worship.   There are several reasons for this – the strength of Sydney Anglicanism – both in numbers and theological robustness (where else in the world can you have a diocese such as Wollongong whose bishop told me that each of his sixty congregations are Reformed Evangelical?), the presence of a substantial number of Christian schools, the growth of the Asian/Australian Christian community and some creative and dynamic leadership.

I am not suffering from ‘grass is greener’ syndrome! I am aware that there are difficulties and problems for the church in Australia – partly from the experience of having been there several times, but mainly because I believe the Bible – we are all sinners – besides which in this world we will have trouble –much of which is caused by ourselves.    However I am looking forward to working with a team seeking to create and use a third space to tell people about Christ. As a church pastor I have always believed that the local church is the primary means that the Lord uses for evangelism. My aim is not to be an itinerant evangelist but rather to help local churches fulfill the Great Commission.

The question then arises why not here?   This is the push factor. I have been doing evangelism and outreach for over three decades. My view is that there needs to be a cultural engagement – not in the sense of culture wars, but rather using the culture to communicate the Gospel. We have to break up the ground, sow the seed, wait for the Lord to give the increase and then reap the harvest. Those who sow in tears will reap with songs of joy (Psalm 126). In St Peters we have tried many different things – café evangelism, door to door, debates, online, secular media, public forums, setting up the Solas Centre for Public Christianity – wherever we can find the market place and people are willing to discuss. There has been little method to our evangelistic madness. I’m like a darts player throwing 12 darts at the board and hoping that one or two will stick. The trouble is that in the past few years it seems as though almost all of them have been sticking! As a result the local church has grown far beyond my capacity – and the wider cultural engagement continues to yield fruit. I either had to give up the wider ministry or give up the local church. It’s been the hardest decision of my life.

Given that the decision was taken to continue with the wider evangelistic work – why not do it here? Basically no one asked me too! I am not prepared to set up ‘David Robertson’ ministries as I regard that as unbiblical and anyway I am a useless organizer. Solas CPC is going great guns since I handed the reins over to Andy Bannister. The Free Church has an excellent missions leader (my good friend David Meredith) and has just set up a Mission centre in Edinburgh Theological Seminary under Alastair Wilson.   I don’t belong to any of the evangelical tribes or networks – so where else could I go?   The bottom line is that whereas doors here were closed to me, a door has opened in Australia.   Is it a case of fitting new wine into old wineskins?

Besides which sometimes I think we think of ourselves too highly – as though the Lord could not do without us and his church would fall apart without our expertise, guidance and abilities! The more I go on the more I realize both the desperate state of the Church and of my own heart. It is of the Lord’s great mercy that we are not consumed. For me it is a tremendous privilege to be allowed to be involved in any part of the Lord’s work.

I have been accused of deserting a sinking ship – because of Brexit! All that indicates to me is the level of hysteria, unreality and lack of leadership within the country (sadly all too often reflected within the church).  I have no intention of deserting my beloved Scotland, or the UK. I would love to return and do evangelism here.   But I always remember that many are the plans in a man’s heart, it is the Lord’s purpose that prevails (Proverbs 19:21). After a serious illness in 2011 I am deeply conscious that I am but a mist that appears for a little while and then vanishes – therefore I cannot boast about what I will do next week, never mind next year! (James 4:14).

Having said that, I hope in God’s mercy to reflect on what the Lord is saying and doing within our culture in future columns. I believe that the church in the UK is in a far worse condition than most of us are prepared to genuinely acknowledge; but also that the opportunities we have in our post-modern, post secular culture are greater than they have been for many decades.   In today’s Britain People are more open to the Gospel – the question is whether we are prepared to communicate it.