This is meant to be the ultimate in tea time feel good UK soap opera.  It is acted well, the characters and story lines are varied and interesting and the whole production, filming and setting is excellent.  However….although this is supposed to be a series that, as the clip below states. ‘warms your heart’, there is much in it that chills mine.  Call the Midwife is one of the most blatant attempts at using soap operas to impose a cultural and social agenda upon the nation.  In the past couple of programmes alone we have had pro-abortion propaganda and intersex.  Both dealt with the situations with no subtility, substance or depth…it was shallow and crass propaganda – dividing the world into blac and white with no shades of grey.

After the pro-abortion episode the BBC got into trouble – not because of its crass advocacy of killing the child in the womb – but because it did not include enough advice and links in the programme information afterwards to enable people to do so!  The Times reported that such was the pressure from politicians that the BBC changed their policy.  Truly we live in a death culture. 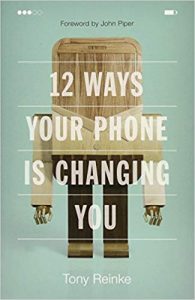 Tony Reinke’s book asks the key question – do you control your phone or does you phone control you?  It is one of the best and most important books any 21st Century Christian could read.  It really is that good.  I will write a fuller review later – but I cannot recommend this highly enough (unless you don’t have or use a mobile phone!),  I would make this compulsory reading for all our members – not least those who are going to the Free Church Youth Conference in a couple of weeks and who will be attending my seminar on the subject!    In summary the book looks at how the smart phones enables and disables our lives – and gives us lots of practical help in enabling us to make sure that we control it, rather than the other way round.   So many great quotes…I give you one.

“Permit not your minds to be easily distracted, or you will too often have your devotion destroyed” Spurgeon

It was reported this week that Bruno Ganz died.   That reminded me of his most famous role as Adolf Hitler in Das Untergang “Downfall”.  I regard this as one of the great films – it portrayed Hitler as a human being, rather than the caricatured monster that he so often is.  Ironically this had the effect of bringing out the monstrosity of the evil he and the Nazis perpetrated.  ‘The banality of evil’.   Watching the film it struck me at the end how Hitler believed by committing suicide he was going to peace.  I guess if you believe there is no God, no after life, no judgement day then once you have committed all your evil, you have no one to account to – so you will think you can be at peace.  It’s one of the ways that atheism facilitates evil.

Historically accurate, thrilling, depressing, thought provoking and with possibly the greatest acting performance (by Ganz) I have ever seen.

In 1979 when I was at Edinburgh Uni I belonged to a music club.  I ordered a Led Zep album and was deeply disappointed to receive a classical album instead.  But rather than send it back I decided to put it on the turntable (how cool was I then!  I see that all hip and happening people are now into turntables and records!) and lay on my bed to listen to it.  It was one of the best decisions I have ever made.  It was Karajan and the Berlin Philarmonic’s version of Beethoven’s sixth symphony – the Pastoral.  I had no idea what it was supposed to be about, but as I lay there I thought of fields, and thunderstorms and sunshine….imagine my surprise when after listening to the whole album I read the cover notes and discovered that this is precisely what it is about!  Ever since I have loved this album – and from it stemmed a wider lover for classical music – which in my inverted revolutionary snobbery I thought I would never have.

Apart from House of Bruar there are no roadside stops alongside the A9. Except the Ralia cafe. As this happens to be exactly half way between my home in Dundee and my parents home near Portmahomack it is the ideal stopping place en route. Over the past couple of years the coffee and food has improved considerably. Great place to stop and refresh.  Although I’m not sure I would come here for a meal….!