I hope to make this a regular feature – I read a lot of books, listen to many things and watch films, tv etc (when I get the time) – so each week I will try to review/reflect briefly on some of them. This week we begin with an unusual, quirky but rather good film, Stan and Ollie.

Bottom line is that this is an excellent film which looks at the nature of a friendship and the fleeting nature of the entertainment industry.  Steve Coogan as Stan and and Jon C Reilly as Ollie are absolutely superb.  This is an intelligent film, without gratutitous violence or sex, and with some intelligence and depth.  Highly recommended for a good night out.

Middlemarch by George Eliot is a book that divides people.  Regularly cited in any list of the top 100 books in the English language, there are those who love it, and those who hate it.  This review by AS Byatt in The Guardian is typical of those who regard it as a great work. I decided to read it after hearing this discussion about the novel on In our Time 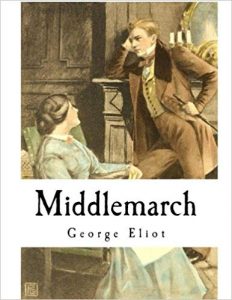 I agree with those who regard it as a great book – one of the few English novels written for grown ups (as Virginia Woolf described it).  It deals with the status of women,  marriage, human nature, religion, hypocrisy, political reform, and education.  I found it difficult to read on the Kindle because its hard to keep up with all the characters and sometimes the language is complex.  It is however worth persevering with – it’s intelligent and raises so many questions.  At times the language and insight are beautiful.  But be warned this is not an easy book.   Eliot apparently lost her faith (if she had any) as a teenager but seems to have reminded sympathetic, especially to evangelicalism.  Middlemarch is really an antidote to Jane Austen – it’s the opposite of a ‘romantic’ novel – although it is romantic in the sense of being about love, passion and social conventions.  For me the book is a work of art – or perhaps better to say that it contains writing which at times is so beautiful and insightful that I would want to frame it!  It also provides much for a Christian to interact with.   At times I wanted to cry out – if only you knew Christ!

Here are a few examples:

To be sure, this life is not everything; but it is seldom a medical man has true religious views—there is too much pride of intellect.

Upon my word, I think the truth is the hardest missile one can be pelted with.” “The fact is,” said Sir James, “if a man goes into public life he must be prepared for the consequences. He must make himself proof against calumny.”

He distrusted her affection; and what loneliness is more lonely than distrust?

It was really before his God that Bulstrode was about to attempt such restitution as seemed possible: a great dread had seized his susceptible frame, and the scorching approach of shame wrought in him a new spiritual need. Night and day, while the resurgent threatening past was making a conscience within him, he was thinking by what means he could recover peace and trust— by what sacrifice he could stay the rod. His belief in these moments of dread was, that if he spontaneously did something right, God would save him from the consequences of wrong-doing. For religion can only change when the emotions which fill it are changed; and the religion of personal fear remains nearly at the level of the savage.

“Oh, you dear good father!” cried Mary, putting her hands round her father’s neck, while he bent his head placidly, willing to be caressed. “I wonder if any other girl thinks her father the best man in the world!” “Nonsense, child; you’ll think your husband better.” “Impossible,” said Mary, relapsing into her usual tone; “husbands are an inferior class of men, who require keeping in order.”

Finally we come on to something that makes the licence fee from the BBC such great value – their new adaptation of Victor Hugo’s Les Miserables.

I cannot commend this highly enough.  It is an adaptation of the book, not the musical.  I am so thankful for this because I regard Les Miserables as one of the greatest novels of all time.  You would never gather from the musical (brilliant as it is)  that it is a deeply Christian novel, or at least deeply influenced by Christianity.  This portrayal so far is far more faithful to the novel than the musical. The characters of Jean Valjean, Fantine and Javert are wonderfully portrayed.   Watch this series….and hopefully it will prompt you to read the book…you will not regret it.