As we come towards Christmas its time to reflect on two different pictures of this ‘special’ time of year. Tomorrow we will look at what the Real Christmas is about – but today let’s go with the fake. 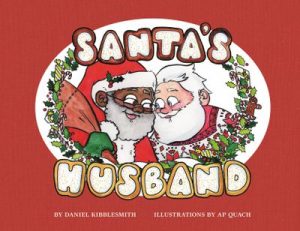 Of course Christmas as a ‘good’ thing is always being appropriated by the latest cause celebre of our culture. This years prize for the worst misappropriation goes to Santa’s Husband – “Everyone knows that Santa Claus is jolly, but in Santa’s Husband, this cherished symbol of the holiday season is also black and gay, and married to an equally cheery man.”   Just what Christmas is all about!

Another thing that everyone loves about Christmas are the carols – the only problem is that so many of them are so annoyingly Christian and biblical.  A friend was at the Scottish Parliament’s Carol service. He reports that the words of some the carols had been changed to make them more politically correct. So for example “virgin’s womb” was replaced with “woman’s womb”  and “man no more may die” with “we no more may die” in Hark the Herald Angels Sing. In While Humble Shepherds Watched Their flocks ‘mankind’ was replaced by ‘humankind’.   Whilst I would expect our oh so PC parliament to mind its language – personally I’m a bit shocked that they are so out of touch that they spoke of a woman’s womb…don’t they realise that some men have wombs too?!

Speaking of which you can always rely on some ‘Christian’ expert telling us that the Bible is not true and that Mary was not a virgin and Jesus was not conceived by the Holy Spirit. This piece in Pathos for example tries to tell us all the advantages for the Church of disbelieving the Bible – apparently it makes us more human!

It’s little wonder that our culture ignores the Church and sees no need for the Christ part of Christmas. Yesterday I was in a card shop and had a look at the Christmas cards. I could not find one that had any mention of Christ or the Christian meaning. It was all Santa, lights, Christmas trees. In another example of cultural ignorance the Thistle shopping centre in Stirling refused to allow a nativity scene to be displayed because they were ‘religiously neutral’! But that of course is impossible. What we think of Christ means we cannot be neutral? I am neutral about racism?

I don’t really blame the culture for this. It’s the church in general which manages to make the Christmas message so banal and dull.   In the past couple of days I have heard religious leaders tell us that the meaning of Christmas is to show that if God can use a small baby he can use any one of us;  that we should all learn to give gifts to one another; that Christmas is about doing the best you can with the life you have – that it is a wonderful life.   My favourite was this morning’s service on BBC Radio Scotland which informed us that “Christmas is political dynamite in a patriarchal world.”   It’s incredible how we manage to adapt the biblical story so that somehow it just exactly reflect our current political zeitgeist!

A classic example of this was the Christmas message from the Moderator of the Church of Scotland.

“People don’t like the party being dampened by what is the reality of the lives others live – and yet as people of faith, we believe one of the main reasons Christ was born, was to share the pain of those who hurt and are suffering and to bring hope to the whole world. That means we celebrate Jesus’ birth best when we let its message speak to the very real fears and failures, disappointments, grief and despair of very real people, and point to what is the powerful and central message of the Christmas story which is God’s utter commitment to his people and his world. Especially the poorest and the most vulnerable.Donning party hats and Christmas jumpers alone, is not going to do that. Using the Christmas period to reach out to the lonely however, to offer space to the upset, to feed the hungry and look for ways to house the homeless, will. What we are celebrating is Good News for all the world. Let’s make sure all the world hears it.”

It all sounds so lovely.   Just like Bishop Curry’s sermon at the Royal Wedding there are lots of words that sound nice and as though they actually mean something. Of course it’s great – and indeed vital to reach out and feed the hungry and look for ways to house the homeless. Who is going to disagree with this ‘motherhood and apple pie’ virtue of our culture? But Jesus came, not so that middle class clergy could pontificate about the poor – he was much more radical. He didn’t even come to feed and house. He came to die for and save. The fears, failures, disappointments, grief and despair of very real people are not met by the nice words and well-meaning wishes, or even the soup kitchen charity of the religious. Something much more radical is needed. Himself. Tomorrow we will see more of what that means.

LadBaby and The Trussell Trust

But meanwhile I leave you with some Christmas cheer – and something that will benefit the poor. The Christmas No. 1 this year is not some X factor clone….its Ladbaby and a song about the sausage roll. The good thing is that all the money raised from this single will be going to the Christian food bank charity,  The Trussell Trust. That at least will do some good (without the cringeworthy waffle).  And this should bring a smile to your face.

(you can hear about the Stirling Shopping centre on the latest Quantum – Quantum 21: Banned from the Mall; Swimming in Stornoway; Referendums; Was Jesus Funny? Saudi Arabia and Yemen; Mary’s Boy Child; The Chinese Church