We will take a break from The Great Deception this week to try to answer the question that many people seem to be asking.  Should there be another EU referendum?

Can someone answer why we can’t have a second vote? Now we are clearer surely those that want to leave will still vote leave. Those who want to stay will vote stay and other folk can weigh up the evidence and decide which way to go. This whole we voted and dry your eyes if you lost attitude is so negative and no one is looking for a keep voting till you get the answer you want crap. We now truly know what we are voting for. It is not an abstract.

Let me list the reasons why some people think there should be another referendum:

And here are the reasons why a second referendum is likely to cause a great deal of harm.

2. Parliament don’t trust the People.  Parliament don’t want the People to make the decision.  What Parliament would be saying if they asked the People again is – “Sorry folks, we made a big mistake.  We should never have asked you to make this decision.  But now because we are a bit scared of ignoring you, we are asking if you wouldn’t mind changing your minds and give us back the power to hand it all over to the EU?   And please don’t worry your pretty little heads, we will never make the mistake of asking you anything meaningful again.”

3. A second referendum will not be decisive.  It is probable that Remain would win – just.   Project Fear usually works.  But it is also possible that the result might end up the same.  Despite all the propaganda there is little evidence of opinion having shifted significantly.  Yes there are those of the 17.5 million who now regret their  vote – in a number that size there are bound to be.  But there are also those of the 16 million who have changed – and there will be those fair-minded people who think that the original vote should be implemented.   If we end up with the same result then how are we any further forward?  And of course the Remainers will demand yet another vote – because we were ignorant (we must have been – otherwise how could we not have voted their way?).

4. There is no evidence ‘the People’ have changed their mind. Despite the millions spent on opinion polls and the increasing Project Fear hysteria there is little evidence of any significant change.  Prof John Curtice says that although people are pessimistic about getting a good deal, opinion about leaving the EU has not really changed.  Read his findings here

I am shocked at how many people actually think opinion polls are the same as votes.  If that were the case, why would we need to vote at all?  Just save the expense and the time and govern by opinion polls!  Or better still surveys which only confirm the bias of those who commission them.  ““A survey by an independent Brussels based think tank reveals that independent Brussels based think tanks believe that Brexit will be a disaster for Britain”

5. What would the question be?  Mrs May would want it to be ‘my deal or no deal’.  But as the whole purpose of a second referendum is to prevent Brexit,  so the Remain majority in Parliament would want a Remain option.  But if you had Remain v’s Mrs May (which is in reality BINO – Brexit In Name Only) then people like me who voted Leave won’t vote because we have nothing to vote for.   A referendum with three/four/five options?  The SNP/LibDems/Tory/Labour Remainers might as well put this as the question:  “Would you like to stay in the ever so nice, prosperous, peace making EU? or would you prefer to die in the bleak post-nuclear island that Brexit Britain will become?!

6.Even the threat of a second referendum is making the EU offer even harder terms.  Their aim is to keep us in.  The best way for that to happen is to offer us such a rotten deal that they think we will all cave in like Mrs May.  They may well be right – after all it has happened before. I  read this fascinating article from the BBC on the EU and second referendums. 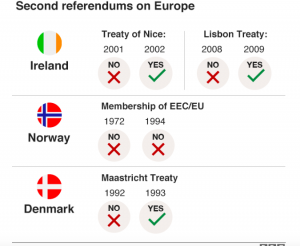 7. It’s not the democratic thing to do.   We had a Peoples Vote.   We were promised that the result of that vote would be implemented.  We were also told that it would be a once for all decision.   A second referendum is designed to subvert democracy, not enhance it.

8. It’s not a Peoples Vote. Not unless you really want to argue that Tony Blair, Alaister Campbell, George Osbourne,  John Major, Richard Branson and Lord Heseltine are ‘The People’!  The Peoples Vote is just a hashtag, no more realistic than the hundreds of thousands of ‘bot’ letters being sent to MP’s on behalf of ‘the People’.    This whole campaign was started by Remainers who were funded by a very wealthy man and whose sole purpose was to prevent Brexit.  The notion of people being given another say was just a pretence.   The people behind this have the attitude of Richard Dawkins who declared that the People should never have been given a say in the first place because we were too ignorant.  Do you honestly think that he has had a Damascene conversion and now considers that ‘the People’ have suddenly developed the intelligence and ability to understand the complexities of leaving the EU?  Or does he think that the People are so stupid that they can be frightened into handing back the power mistakenly given to them?

9. A second referendum would be even more divisive than the first.  The fanatical Remainers would pull out all the stops – with their EU flags, Guardian columns and every more hysterical warnings, mockery and threats.   The fanatical Brit Nats on the other side would likewise stoke up the tension.  If you want to fuel the Far Right, cancel Brexit. The Progressive liberals, for whom the EU is Nirvana, are the greatest allies of the Far Right.  Both are enemies of democracy.

10. A different result would greatly damage if not end democracy in the UK.  Parliament having handed the people a vote, would have taken it back and cajoled, frightened and compelled us into giving them the result they really wanted.  Once they took the power back they would ensure we never have a meaningful vote again – and they would hand over even more power to the EU – which would ensure that we would be even more ensnared in the Hotel California that is the EU.  Ironically Parliament would be taking back sovereignty in order to hand that sovereignty back to the EU.

Take for example the fishing quotas decided this week.  The EU Commission decided to give the Faroese fleet 1/3 of the mackerel catch in ‘EU waters’ – which in reality means Scottish waters.  And there is not a thing that either the Scottish or UK governments can do about this.  The SNP can whisper as much as they want about how they want the best for Scotland’s fishermen, but their policy means that the sovereignty over these waters is handed to the EU Commission!

To me this is the negation of democracy.  In fact I would see little point in voting in another UK election.  What would be the point?  We would just have become another EU region, a playground for the rich where our politicians could play their games and pretend that what they actually did was important.   If the politicians can ignore the biggest democratic vote ever in UK history, then they have no need to take heed of any other votes that we have.   Our national elections would just be deciding what pen pushers we want to implement the rules made by others. Rules in which we fundamentally have no say.

Finally if there is to be a second referendum it should only be appointed by a parliament which has been elected for that purpose.  In other words let their be another general election and let those who want a second referendum stand on that ticket.  Only then will parliament have any moral right to call for another referendum.   But I’m beginning to suspect that morality has little role to play in this whole mess!

Will Brexit Happen? The Truth about the EU…