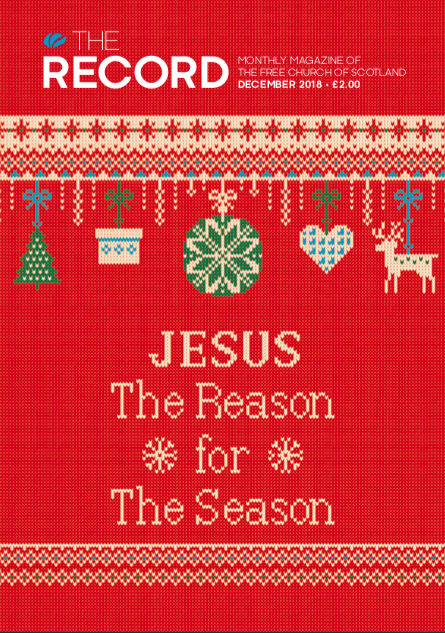 This is the editorial for December’s Record.

Reflections on Christmas Past

Twas the night before Christmas… and the Free Church preacher was in his usual place of a Saturday night, preparing for the services the following day. As usual he was fearful and anticipatory. There was the normal sense of anticipation – after all, gathering to worship the living God is a wonderful thing – who knows what He may do on any Lord’s Day. But the fear was a little more than usual. The following day was Sunday the 25th of December. Given that it is the only ‘Christian’ festival which still resonates in the British public conscience, the preacher should have expected a bumper congregation and a sense of celebration and rejoicing at the birth of Jesus Christ. Yet he feared that this would be his lowest congregation of the year. There were good reasons for that – many people in his congregation had gone away for the holidays. Some returned to the land/area of their birth to be with family and friends; others had joined the 10% of Scotland’s population who streamed through the airports to head for sunnier climes. He knew that there were adherents who would be reluctant to come out on Christmas Day. And he knew that there were those who would struggle with the whole idea of the Free Church celebrating Christmas at all.

Late in time behold Him come,

Offspring of a virgin’s womb!

Veiled in flesh the Godhead see,

Pleased as man with man to dwell,

‘Who is He in yonder stall?

At whose feet the Shepherds fall,

Tis the Lord, the King of Glory.

It struck him as somewhat ironic that, not for the first time, the secular humanists and those of his brothers who considered themselves ‘traditional Calvinists’ would agree in seeking to take the Christ out of Christmas. The secularists would argue that Christmas should be a secular/pagan festival; the traditionalists would argue that it already was. Both would agree that it should not be seriously celebrated. Perhaps, the preacher reflected, in days gone by there was no harm, and indeed plenty to be said for, the non-celebration of Christmas. In fact, it was a position he once held with some vigour (although not enough vigour to refuse turkey, presents or some of the other trimmings!). However, as he grew older and wiser, he had come to see that Christmas was one occasion where the Christian Gospel could easily and clearly be proclaimed to the wider community. As a point of connect it was almost perfect. More than that, he himself had come to appreciate more and more the value of setting aside a season of time to reflect upon something as wonderful as God becoming man. In theory he knew that he should be rejoicing in that at all times, but that was just theory. Practice was what was needed.

Twas a Night After Christmas….

And the preacher reflected on what had been. Sunday morning was not as bad as he had feared. Although most of the regular congregation were away, some were still around, and there were even a couple of new people. And it was good to celebrate together on Christmas morning, on the Lord’s Day, the birth of Jesus. The evening was somewhat different. That morning about 10,000 people had been in churches in his city. As far as the preacher knew there was only one evening service – with even the evangelical churches deciding that worship on Sunday evening was too much to expect on Christmas Day. But only a grand total of twelve people came to communion that evening. The communion itself was actually an enjoyable occasion. And very appropriate. What better to celebrate Christmas than to remember Christ’s birth in the morning, and his death in the evening? But why was there so little interest in coming to publicly worship Jesus on the day when the people were supposed to be remembering his birthday? The preacher knew he could say nothing – any comment would be immediately be met with the usual cry of ‘legalism, legalism’! Anyway, nagging never works. Years of pleading with people to fill up crèche and coffee rotas had taught him that.

Jesus is the reason for the season.

Did the evangelical church which placed that advert not realise the irony in declaring that Jesus is the reason for the season, and yet cancelling worship of Jesus on the Lord’s Day? Amazingly, that same newspaper had a letter the following week from a young man who wanted to know why the evangelicals had cancelled their evening services – why was worshipping Christ seen as an imposition? Good question.

And then, as the preacher was wondering if this lack of public worship on Christmas Day was a peculiarity of his city or country, his eye fell upon an article in Leadership Today entitled Closed for Christmas. Apparently this Christmas, several of the megachurches in the US, including Mars Hill and Willow Creek, decided to close for Christmas. Willow Creek was reported as closing ‘so members can focus on the family’. A spokesperson for the church declared that ‘Church leaders decided that organising services on a Christmas Sunday would not be the most effective use of staff and volunteer resources’. How sad, thought the preacher. It has come to this. Church is about the personal convenience and comfort of the consumerist Christian. Church should not be imposed. It is a business that seeks its own particular brand of consumer. And amazing how the mantra of ‘it’s for my family’ or ‘I’m tired and need some personal space’ have become so much part of the psychological make-up of the non-legalistic Christian today.

What amazed the preacher, and almost caused him to choke on his chosen beverage, was the justification for the closure of churches on Christmas Day. According to Leadership Today, closing on Christmas was not a new thing – in fact, it could be traced to America’s Puritan past. The Puritans believed that Christmas was either a pagan or a Romish festival and therefore should not be celebrated. What astonished the preacher about this article was the breathtaking ignorance and misuse of history. The Puritans did not celebrate Christmas Day but they would have been horrified at the notion of cancelling services on the Lord’s Day – especially in order to celebrate Christmas! The problem was not that churches or Christians chose not to celebrate Christmas – that after all is an individual choice – the celebration of the 25th of December is not mandatory for any Christian. However, worshipping Jesus on the Lord’s Day is. As he reflected on this, the preacher reached for his drink and sat staring at the log fire wondering where all this was going.

That week the preacher had received several letters, e-mails and calls from people from the ‘world’ who had heard him on a radio discussion programme. They had confirmed his suspicion that modern Scottish society is not as secular as is sometimes portrayed. There are many people who are spiritually searching and who are desperate to hear the real Gospel. But the trouble is that they just do not associate it with the Church. Firstly, they have been indoctrinated into the view that anyone who holds firmly to any biblical belief is some kind of redneck ignorant fundamentalist. Secondly, the alternative of the ‘nice liberal’ is not an attractive one to them either – appearing wet, weak and meaningless – who really wants baptised political correctness?

And then there is the problem of the Church itself having adopted a corporate, individualistic consumerist mentality. Thus it has lost its radical cutting edge. The Church has become a blunt instrument incapable of cutting through the secular skin of our society. Thus when faced with the cynicism of columnists such as Robert Frampton of the Times, most Christians are ill-equipped to do anything other than shrug their shoulders and say ‘oh well’. Mr Frampton had indulged his atheism in The Times on Christmas Eve – ‘Christianity? Yes to the hymns and the ethics, no to the theology, the mythology and the metaphysics. The Ten Commandments? Marvellously effective basis for personal morality and social control. Jesus died on the Cross for our sins? Mystifying and offensive. Heaven and Hell? Hell, no. Heaven? Useful holding opinion to soften the blow of mortality, hamsters, grandparents and victims of natural disasters alike.’ And so on. The preacher felt the frustration rising again. Why was such thinking (clever but so easily answered) to be left alone? If only those who had the pulpits in the big churches and in the marketplaces of television and radio could take the opportunity to take Mr Frampton’s ‘yes to the hymns’ and explain the marvellous theology of ‘veiled in flesh the Godhead see’.

And so the preacher approached the end of the year. What lay ahead in the coming year? There were clouds on the horizon – the trouble was that the preacher was not sure what kind of clouds they were. Were they showers of blessing? Or storms of opposition? Perhaps both? But, O Lord, thought the preacher, please don’t let this coming year be dry. Send the rain. And the sunshine. Don’t let us live in a land where it is always winter and never Christmas. Don’t let us live in a consumerist culture where we worship the gifts rather than the Giver. He wished it could be Christ’s Time every day. Happy Christmas. Happy New Year.

In fact the mystery of Christ is in danger of being rejected, just because it is so exceedingly marvellous. God dwelt in human nature! He who transcended all creation existed as a human being! The Invisible One became visible in flesh! The Lofty One from heaven existed in the likeness of earthly reality! The Pure Spirit could be handled! The One who by very nature possesses freedom came in a slave’s form. The One who blesses the whole universe became accursed! He who is perfect righteousness was reckoned among transgressors! Life itself came to us in the guise of death! These things are all true because His human body that tasted death was the very body of Him who is God’s own Son by nature. -Cyril of Alexandria

The December edition of The Record, the official magazine of The Free Church of Scotland, is now available online via Issuu. https://thefree.church/1e

The contents are on the left.

Have a great Christ centred Christmas….