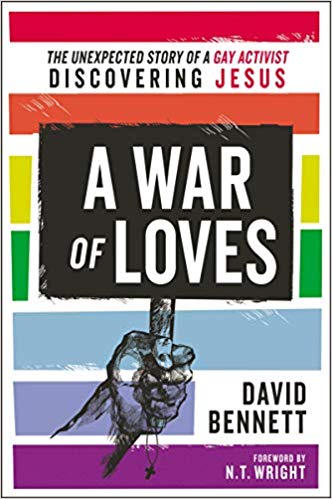 The Christian book world seems to be filling with gay Christian memoirs.  First there was the disappointing and depressing Vicky Beeching’s ‘Undivided’.    This was followed by Jackie Perry’s well written and refreshingly biblical  Gay Girl, Good God . Then we went downhill again with  Jayne Ozanne’s  Just Love –

Now we come to David Bennet’s newly released book, War of Loves.  The self-description summarises it well:  David Bennett came out to his parents as gay when he was fourteen and entered Sydney’s active gay community a few years later. In A War of Loves, he shares his growing desire as a gay rights activist to see justice for LGBTQI people, his journey through new age religions and French existentialism, and his university years as a postmodernist–before Jesus Christ showed up in his life in a highly unexpected way, leading him down a path he never would have imagined or predicted. David had believed he was disqualified from God’s love until he encountered that for himself in Jesus Christ. In A War of Loves, he recounts his dramatic story, investigates what the Bible teaches about sexuality, and above all demonstrates the profligate, unqualified grace of God.

There is a fair bit of controversy about this book.  Bennett chooses to use the LGBT language and to identify as a celibate gay Christian – terminology which gets him into trouble with the ‘progressives’ who don’t like the celibate part, and traditionalists who don’t like the ‘gay’ part.   The book itself is quite extraordinary.  It is well written, profoundly theological and deeply insightful – I learned a great deal.  Bennett challenges many preconceptions – including some of my own.

War of Loves  tells the story of someone on a journey and gives the sense of that journey not yet being complete.  There is also a large amount of personal testimony and experience – some of which is deeply spiritual.  This ‘story’ helps us to understand the experiences and feelings to some degree – but the trouble is when story is placed against story.  Bennett says that God made it clear to him that gay Christians should be celibate.  Ozanne says that God made it clear to her that gay relationships are fine.  Arguing from experience or from ‘God told me’ is always at best secondary.   Thankfully both Bennett and Perry place far more emphasis on God and Scripture.  I find it interesting that both Beeching and Ozanne come from Christian backgrounds and argue for a ‘progressive’ view, whereas Bennet and Perry come from non Christian backgrounds and argue for a more biblical approach.

Overall I loved this book and would highly recommend it.   I was very impressed with how Bennett comes across and would love to meet him.  This impression was only confirmed by listening to him this afternoon on Justin Brierley’s Unbelievable radio show.

The following quotes give a flavour of the book – some of them are insightful and very helpful.

Most of my school friends were agnostics or atheists and were more in touch than the Christian kids. To us, Christianity seemed like a club with narrow, oppressive political values. We aspired to the real freedoms we knew existed beyond it. Privately, I was still captured by what I knew of Jesus and reasoned that he had been the greatest human being in history. But he’d been lost in a human-invented religion that tried to make him into a god.

As I explored Paris with my friends and found myself in the center of Paris’s lively gay community in the Marais district, my heart ached to find love. Surveying the cafés, Jewish delis, and clubs concentrated in what seemed a cosmopolitan utopia, I wished I could stay there forever. Yet in this free, secular space, I sensed an open wound in my heart. My search for God had waned, and a painful desire for romantic love had replaced it.

I frequently made it clear that evangelical or conservative Christians were my enemies, and I avoided them in classes or at parties. Whenever I saw Christians handing out free food on campus or huddled in their pathetic Bible study groups, my skin crawled. I hated their constant effort to indoctrinate me with the deluded notion of living forever with a first-century Jewish carpenter.

I was a different human being, and it showed. But to my political and gay friends, I was a cultural traitor. I experienced more severe hatred from many of my secular friends than I did before from Christians for being gay. My secular friends assumed things about me that were just as prejudiced, if not more so. Many mocked me. But I knew that before I met Christ, I would have done exactly the same. I could point no finger. I had become the very person I once hated.

My yearlong commitment to singleness was up. With a deep internal sigh of relief, I was dating Thomas, a handsome Italian Catholic I’d met online months earlier. He was amazed to meet a born-again Christian who was gay and open to a relationship. But the issue of whether we would be accepted at this church remained.

Even in my church, friendship seemed secondary to romantic love. It seemed like everyone had been reading Jane Austen more than the New Testament, or watching nineties rom-coms more than the work of the Spirit.

As he spoke, the Holy Spirit convicted me that I needed to trust God’s authoritative words. Tears poured down my cheeks. I realized I had sat in judgment above Scripture, never really appreciating its preciousness. I had never been willing to submit to it. I could no longer claim to love Jesus without really knowing his words and choosing to live according to them.

For more than thirty years, Merrie had dedicated her life to bringing the gospel to her beloved France, quietly making disciples among students and other people often left on the margins by the church. She even told me about a brief discussion in Rome her Christian friend had with none other than my onetime hero, Jean-Paul Sartre, shortly before he died. Sartre ended the conversation saying, “I’m not far from where you are with Jesus.”

After I returned, my questions about biblical interpretation resurfaced. I saw now (Don Carson’s voice ringing in my mind) that much of my reading of Scripture had simply been interpreting it as saying what I wanted it to say—putting myself above the text. Besides studying the context and using reason as I read God’s Word, there was also a relational aspect. I needed to have a healthy respect, a fear of the Lord. That relationship would put God’s view above my own.

During my time as an activist, we frequently used the famous slogan “Love is love” while fighting the orthodox Christian definition of marriage. Love, as we defined it, was our highest ideal and our sacred entity. That, in our minds, settled the issue. But while our slogan was popular, it was shallow at best. “Love is love” doesn’t mean that much semantically, and it provides no definition of what love actually is. Nor can it differentiate between the various kinds of human love and desire.

Love, I have come to learn, is not God. Flip that. God is love. The God revealed in Jesus Christ is the definition of love.

Those with the traditional view, on the other hand, maintain that same-sex marriage and sex acts are not permissible. When charitably understood, the traditional or orthodox view has nothing to do with homophobia or denying the equality or rights of LGBTQI people; it is simply a different vision of human sexuality and its purpose in marriage. It comes from a richness of belief, not a poverty of perspective. It’s just not as simple as affirming or non-affirming.

Unless we learn how to accept others without affirming everything, we have lost the art of conversation, because we’re suppressing our honest opinions. We can accept and affirm people without agreeing with and affirming all of their desires or beliefs or accepting their actions.

When we come to Christ, the crucial question is what to do with our identity. The things that make up our identity are fundamental to our nature. They are what we’re known for and validated for. Atheist David Foster Wallace once said, “In the day-to-day trenches of adult life, there is actually no such thing as atheism. There is no such thing as not worshiping. Everybody worships.”36 Whatever we worship shapes our identity. It could be sexuality, vocation, family, or gender. Whatever it might be, we were made to cleave to God for identity and meaning. Oliver O’Donovan, former Regius Professor of Moral and Pastoral Theology at Oxford University, states, “If Christianity has a saving message to speak to human beings, it must surely be, ‘You may be free from the constraints of your identities.’ ”

When Jesus Christ is relegated to a hobby for middle-class families and not allowed to be the Lord of our entire lives, we are bound to destroy the witness of his gospel.

I came to see that God had covered me with the hem of his garment and pledged his covenant love to me as part of his bride, the church. He said to me, David, you are not ultimately celibate, gay, or any of these titles or labels. While they are part of your reality now, the ultimate reality is that you are betrothed to me. My love is your true identity. While I still use the words gay and celibate to describe myself, what ultimately defines me is God’s overshadowing covenant love. And he invites all people, including those like me, into this same holy, covering relationship.

Instead of creating a safe place for people like LGBTQI Christians to share, we tend to react from fear, not from the security of the gospel. God wants all people everywhere to turn from their ways in order to know him. He wants us all to adopt an entirely different view of meaning, transcendence, and worship. Can you imagine how healing it would be for the church to acknowledge that it is just as broken and sinful as the gay community? Can you imagine the power in store if Christians were to humbly repent of hypocrisy before expecting others to repent?