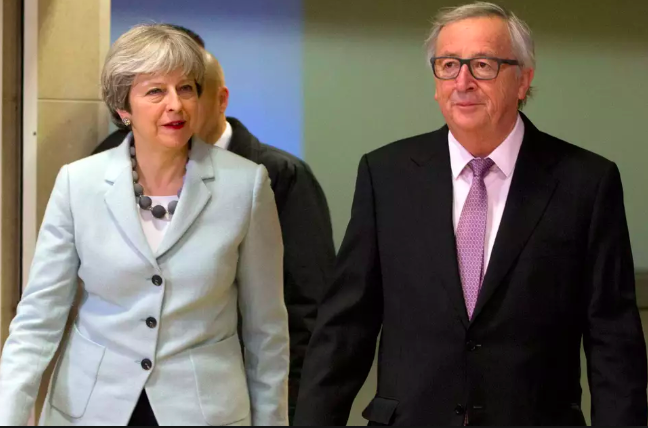 Theresea May has got a deal with the EU…. a deal which has achieved the impossible and united both Remainers and Brexiteers against her.   Something which causes some to feel a great deal of sympathy for her. She certainly seems determined to continue…but continue with what?

The PM argues that her deal gets us out of theEU, the Customs Union, the Single Market, the European Court of Justice and that we get control of our money, borders and above all immigration.   So why did her Brexit secretary Dominic Raab resign over a deal which gives the British people what we voted for – a deal which he is supposed to have negotiated?! Because he didn’t negotiate it.  Like his predesscor he was there as window dressing for the Prime Minister – who in turn has been superbly manipulated by the Commission – who don’t have to bother with little inconveniences like the electorate and democratic accountability.   Authoritarian Technocrats can always say No, because no-one can say No to them.

Raab resigned because this deal does not give the British people what we voted for. In fact if anything it is about the worst possible deal that she could have come up with.  This article in the Spectator explains why. (The government have responded to this here)

The deal has us staying in the Customs Union  ‘temporarily’ – the only problem is that there is no time limit for us staying in, and we can only leave if the EU allows us to.   We now find ourselves in a situation where we are bound by EU laws and rules – which we will have no say in making and which we cannot get out of.   We voted to leave the EU and Mrs May has so surrendered to the EU that we are still bound to its regulations only this time we don’t have the option of leaving!  And we are paying billions for the privilege of being ruled by Brussels.   We can’t even make our own trade deals (at least not without EU permission and within EU rules).  Its like getting officially divorced and yet still being told that you have to live with your partner, fulfill all the obligations of marriage, not be permitted to marry anyone else and yet pay for the privilege!

The whole deal is not a compromise. It is a betrayal.  It is BINO.  Brexit in Name Only.  We will become like Turkey and pay for the privilege of being a vassal state.

This deal was written by the EU Commission which is why it was welcomed and accepted with such haste by Guy Verhofstadt and Juncker.  They have got everything they wanted and then some.   Even if theBritish Parliament rejects the deal then the most likely scenario is that theUK will stay in the EU, probably through another vote  – the EU has form for insisting the people keep voting until they get the ‘right’ result.  And they have plenty of allies here in the UK.The EU can, and will get whatever it wants. Big Business, the Technocrats of Brussells, the Liberal Elites (the ‘Anywheres) who benefit most from EU subsidies,  the politicians (most of theHouse of Commons, the Scottish Government, the Greens) were never going to accept Brexit.  They have too much to lose and at the end of the day, they have the power.  They are furious with David Cameron for giving ordinary people the hope of sharing that power. Once they get their way you can guarantee there will never be another real People’s Vote.

So why has this happened?  Is it dishonesty or incompetence?   I don’t believe that even as a Remainer Mrs May was as Machiavellian as to have deliberately engineered all this.  It is far more likely that it is her incompetence together with the hostility of theBritish Establishment to Brexit, combined with her hubris (remember the general election with the bus telling us that we should all support her strong and stable government!).  She did not prepare for no deal, presumably because she didn’t think it would be needed;  so it would now mean considerable pain and disruption in the short term.   The EU of course knows this so keeps asking for more and keeps threatening to make no deal even more painful for the UK. Neither May nor the Houses of Parliament, nor the Establishment have either the desire, the courage or the know how to take on the EU.

She has muddled along from one crisis to another – trying to keep her head above the political waters, which is why for example she agreed to the Northern Irish backstop so that she could have some progress to report. The trouble is that in order to avoid short term pain she has ensured that the UK is now tied into long term decline.

Take for example the issue of fishing.  Having signed this deal Mrs May says that we will be out of the CFP – but again that will be in name only.  When the EU negotiate a trade deal they will insist on access to UK fishing grounds and the UK government will grant it, because they cannot refuse the EU who now have the ‘back stop’ to fall back on.   Britains fishermen will be betrayed for trade as they were in the 1970’s by Heath.  We will not be ‘negotiating’ a trade deal with the EU – we will be accepting our orders.

It is little wonder that the EU bureaucrats are crowing about the UK surrender (apparently e-mails have been circulating stating that we have lost no powers at all) .  Mrs May has crossed almost all her red lines and broken almost every promise made – even “no deal is better than a bad deal” has been turned into “any deal is better than no deal”.  The EU know that and so can demand what they want.  If the UK cannot leave the EU then the Hotel California adage of Yanis Varoufakis  ‘you can check out any time you want, but you can never leave’ will have been demonstrated to be true.  Smaller nations havn’t a hope of standing up to the EU bully.  Let the lesson be learned.  Once you are in – you are finished as an independent sovereign nation.

Perhaps I have got this all wrong?   Perhaps Mrs May has played a blinder?   Maybe this is just a temporary measure which will result in the UK becoming free from the EU in the medium term?   I think that is as likely as us rejoining the EU and finding it to be a reformable, democratic body!   But I have been wrong before so I will watch developments with interest.

I’m not a prophet but let me take a stab at some prediction.

Mrs May will survive because its too late to do anything else with anyone else.

Parliament will, despite all the noise, pass some kind of deal more or less the same as the current one on offer.  Again because there is little alternative and no time.  Or perhaps parliament wilreject it and rather than go to the country for a mandate Mrs May will authorize a second vote where the question will in effect be “Do you accept this deal which leaves us still effectively in the EU, but with no power, or would you prefer to return to the old arrangement?”  I think this is unlikely because it would mean the end of the Conservative party and virtually guarantee a Prime Minister Corbyn.

Here is Britain in 2018: our chattering classes traipse to the cinema to weep over Mike Leigh’s new movie Peterloo, which tells the story of the heroic working-class struggle for the right to vote, and then they go home and get back on Twitter and carry on agitating for the overthrow of stupid working-class people’s vote for Brexit. They fantasise that they are on the side of the marchers of Peterloo, when in truth they are on the side of the cavalry, only they want to cut down our democracy with bad deals and shady sellouts rather than with bayonets.” Brendan O’Neill Stopping Brexit Means Stopping Democracy

The political classes will find that things return to normal.  They will talk about democracy having killed it.  They willoffer the plebes cakes and circus’s but they will ensure that we never again  get the opportunity to have a meaningful vote. Politics will return to normal.   Wewill only be able to vote for party hacks who have been bought and sold for EUgold.

We need a revolution.  But Brits don’t do revolution.  So it will be the same old story – meet the new boss, same as the old boss.  Won’t get fooled again?  We just were.

And yet May was also a Remainer. And so too was her Chancellor. Their hearts are not with leaving the EU, their hearts are for staying within it as far as is possible. May’s sole purpose at the moment is to stay in power — although, frankly, why she should want to eludes me entirely. But imagine what a government with confidence and imagination might have done, secure at home and therefore immune to blackmailing. Leaving a trade organisation is not, in reality, a terribly troublesome business. Nevertheless, we have made it so.

I am told quite frequently that a failure to leave will lead to riots on the streets. No it won’t. It will lead only to a sullen acceptance that once again, you can’t beat the establishment. It will always win in the end.

This article, Will  Brexit Happen?  from over a year ago…seems to have been accurate!