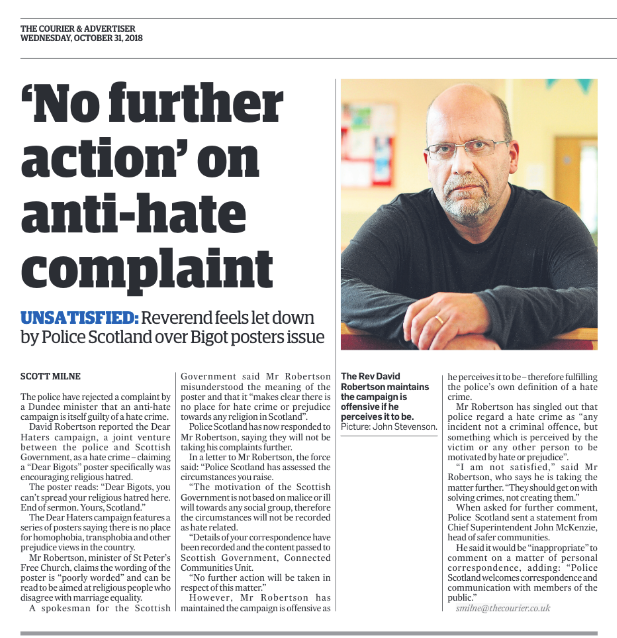 The Dundee Courier have this report today on the police/Scottish government Hate campaign.

Note the police response from Chief Superintendent John McKenzie:  “It would be inappropriate to comment on a matter of personal correspondence.  Police Scotland welcomes correspondence and communication with members of the public.”

It’s hard to believe both the inanity and the brass neck of that comment.  First of all this is not ‘personal’ correspondence.  It is not private.  The police have made a public campaign which implies that hatred stems from ‘religious’ people and those who preach sermons.  I have made a public response – my letter is public and the press are involved.  Instead of answering the complaint the Chief Superintendent makes these two inane comments.

Firstly let me say to the Chief Super, that not to comment, when you are being accused of breaking your own rules on a matter of great public concern, is what is ‘inappropriate’.  To fob of the press in this way is an action of a politician not a civil servant who is answerable to the public.

Secondly there is no point in ‘welcoming’ letters from the public if you are just going to throw them in the bin or answer them with platitudes and inanities.  The fact is that your own law says that it is the perception of the ‘victim’ that turns something into a hate incident.  I think that’s unworkable and illogical but you clearly don’t.  So the question that the public need answered is why that law/principle only applies in some cases and why the police and government are exempt from their own laws?   My perception, and that of many others, is that your poster campaign is motivated (at least in part) by hatred of religion – or at least those religious views which contradict the doctrines of the State.  What gives you the right to determine that the perceptions of some are invalid but the perceptions of others get reported as hate incidents?   In effect you are making a farce of the law and playing politics.   You are determining that some groups are hate victims and others hate perpetrators.

The police should get on with solving crimes not creating them.  Its time for you to get out of politics and do the job that you are paid to do.  Stop funding and running political campaigns and using your overstretched officers for this purpose.  Stop demonising and criminalising members of the public who disagree with the philosophy of the political elites. Get on with catching real criminals. Please….

The Political Police (part 2) and a Brilliant Letter

You can support The Quantum of the Wee Flea fundraiser by clicking the link  Patron.podbean.com/theweeflea  We are half way to our monthly target already!