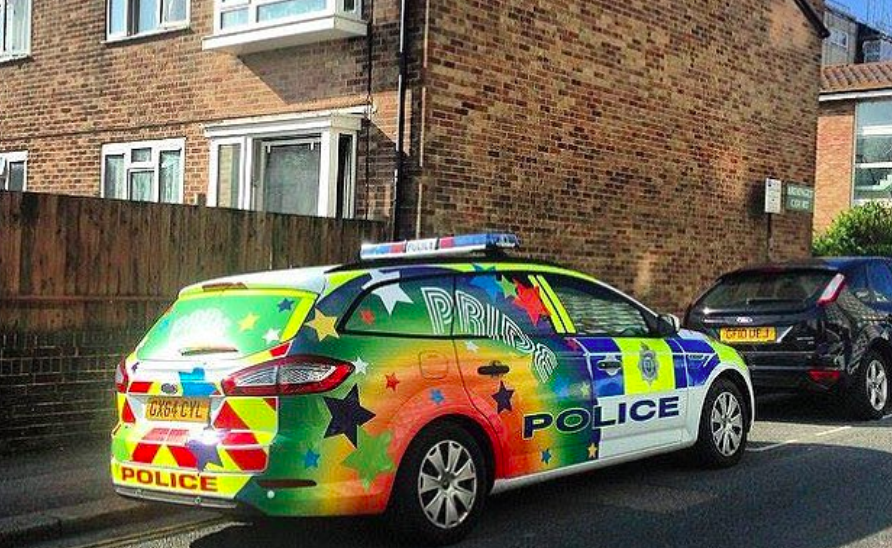 The politicisation of the police is something that we should all be worried about.  It is clear yesterdays article , The Political Police and the Slide to an Authoritarian State,  that there are some groups and political causes that are being promoted and favoured by the police – they are encouraging these groups to report hate crimes, and dissuading others from doing so.  The only reason for this is not to promote justice or uphold the law (surely the primary if not sole function of the police) but to promote a particular political agenda.  Let me give two examples.

Take this tweet from North Ayrshire police – this is an official tweet.  I think it is perfectly fine for an individual or a political organisation to post this twee tweet – but the police?   Does this not smack of trying to curry favour with the governing party?  Since when did the police become the mouthpiece for government and party political propaganda?

I have no doubt that WhoCares? Scotland is a worthy organisation and that it is a good thing to support them.  But is it the business of the police to waste time tweeting the thoughts of the First Minister?  Whats next? The Little Blue Book?!

And then what about the use of police officers and equipment to promote particular political causes?  Are the police supporting the 1-2% of the population that profess to be LGBT because they really do so, or because they are virtue signalling and trying to show how much they ‘care’?    Given that it is surely the duty of the police to treat all equally can we look forward to police cars covered in crosses or other Christian symbols, given that over 50% of the population profess to be Christian?  Can we expect several hundred officers to be trained in supporting the Christian community and recognising religious harassment?  Will the police be going into schools and telling pupils not to call those who go to SU groups or church ‘bible bashers’?  Will the police and teachers receive Christian diversity training? Yes it is the duty of the police to protect LGBT people from law breakers, harassment and trouble – just as it is their duty to uphold the law for us.  But do they need to waste precious resources virtue signalling for their political masters?

As regard the religious hate posters – here is a brilliant letter to the Justice Secretary Humsa Yousef from a couple of students which deserves a wider circulation (it is itself a telling indication of todays society that this letter has to be posted anonymously – this is the atmosphere of intimidation and fear that we live in).   I suspect that these young people will have got exactly the same bland reply as the rest of us – despite their well thought out and reasoned letter.   Reason and thinking things out does not seem to be in vogue amongst the leadership of the political police.   I should also point out that there are many within the police who are deeply unhappy at the way they are being used in this political sense.  I have received well sourced and reliable information that this poster campaign is not the work of the police but the Scottish government and that the police are just doing the bidding of their masters. But who will do anything about it?

(The parts in bold are what I have highlighted)

October 5, 2018
We are writing with concern about a public information campaign being carried out in Scottish cities, the launching of which you were personally involved with. Residents of and visitors to Dundee where we live and study are now confronted at bus stops and billboards with posters carrying the following message: “Dear BIGOTS. You can’t spread your religious hate here. End of Sermon.’’

We wish to bring to your attention a number of the visual and rhetorical features of this specific design which do a great disservice to civic cooperation, goodwill and community spirit in general, as well as bringing about harm to groups and individuals in particular. As the Cabinet Secretary for Justice and a committed public servant working for the good of Scotland these are not results that your policies should directly or indirectly create.
First and foremost the posters insinuate and imply that persons of a religious background are likely or at least more likely than the general population to be involved in acts of bigotry and hatred or if not, at least hold bigoted views. The posters suggest that attitudes of hatred are closely aligned or attached to religious views. This insinuation is both false and deeply insulting to the Muslim, Christian and Jewish citizens of Scotland and those of other faith backgrounds. As students of moral philosophy and medicine we would suggest instead that there is substantial social scientific evidence that religious persons and communities are disproportionate sources of generosity, support and compassion in society. The work of the American evolutionary social psychologist Jonathan Haidt is a good starting point for analysis of this phenomena.

In Glasgow the central mosque runs the largest soup kitchen in the city and in Aberdeen and other cities the Christian Street Pastors save many thousands of pounds of police and NHS money by listening,caring and helping inebriated or injured drinkers, de-escalating fights, protecting vulnerable women from harassment and assisting the mentally unstable in the late hours of the night. This week BBC 2 will run a documentary on the work of Christians Against Poverty, a spectacularly effective debt relief charity operating across the UK. Such groups are compelled by their religious convictions to help others and improve their towns and cities, doing so in cooperation with local government and the police.

That the government and police should repay this dedication with threatening posters is a disgrace. The rhetorical alignment of bigotry and religion displayed in these posters is a distortion of the reality on the ground. In an era already struggling with so called fake news, this is not a direction that Scotland should move in.
Secondly, there are further features of the poster which seem to be tendentious and partisan. The use of a heavy serif typeface commonly seen in prayer books or English translations of the Christian Bible or Jewish Torah again implies that there lurk amongst the good people of Dundee a class of reprobates clutching old books and harboring bigotry against their compatriots. This is deeply unhelpful and utterly irresponsible. The sarcastic addition of the words “Sermon Over’’ as a closing remark is further evidence of this irresponsibility. It makes fun of the idea of a sermon – which is for many a treasured weekly point of spiritual and moral renewal and reflection.

Muslim Scots would be deeply hurt at the insinuation that their ​khutbat al-jum’a s​ hould be seen be seen as a problematic or laughable source of bigotry or hatred. The symbolic, visual and linguistic association of societal or moral problems with a subset of people is a textbook move employed by illiberal regimes historically and globally today. It is not a move which a liberal democracy such as Scotland should seek to emulate, however well intentioned.
Thirdly, the purpose of these posters is to warn those who hold what the government deems hateful views and encourage those who do not to report them. This is a move that seems utterly unsuited to the functioning of a pluralistic western country. We have friends and contacts in countries such as Egypt and Syria who face danger on a daily basis and live under the fear of being reported to the police by colleagues or neighbors for disagreement with the government on moral and political issues. This is surely not a direction in which the Scottish government should move. Individuals change their mind and gain greater respect for those who live differently or come from different backgrounds to them on the basis of personal interaction, not governmental coercion.
Fourthly we would like to suggest that this campaign is ill designed to achieve its own goals. Any subset of hardcore religious extremists existing in Dundee are unlikely to be much affected by such posters – if anything it may lead them to see themselves as heroic outsiders facing governmental and societal pressure. These posters misinform the public about sources of hatred, stigmatizing moderate religious persons and leaving any genuinely problematic individuals or groups unscathed. This is particularly unfortunate in light of the fact that the University of Dundee takes many students from Indonesia, Malaysia and South Korea. Religious faith and practice is a core component of the lives of huge swathes of the populations of these countries and the young people studying here from such backgrounds should not be confronted with posters implying that they are somehow pariahs or preemptive suspects of hate crimes for doing so.
Finally, the Crown Prosecution Service’s agreed common definition for religious hate incidents reads as follows: ​“Any non-crime incident which is perceived, by the victim or any other person, to be motivated by a hostility or prejudice based on a person’s religion​ ​or perceived religion.”​ We suggest that placing tendentious, unhelpful, rhetorically and visually propagandistic posters in public spaces may justifiably be perceived by many residents of Dundee as motivated by hostility or prejudice towards their religion. Thus by issuing such posters at the taxpayers’ expense, Police Scotland and the Scottish government unwittingly provoke hate incidents in the lives of the people they have the responsibility and privilege of being chosen protect and serve.
We urge you to do whatever is in your power to reconsider this campaign and to consult with an ecumenical and interfaith focus group of leaders from the prominent religions of Scotland before issuing such posters in the future. The goal of a society free from faithless or faith based hatred is an admirable one which we applaud, but much greater consideration must be put into the design and wording of public information campaigns. To adapt the words of the poet T.S Eliot – the last deed is the greatest treason. To do the wrong thing, for the right reason.
Sincerely

(Footnote:  This letter like hundreds of others will not be recorded as a report of a hate incident – because the police have determined that they will only accept the perceptions of certain groups and not others)….