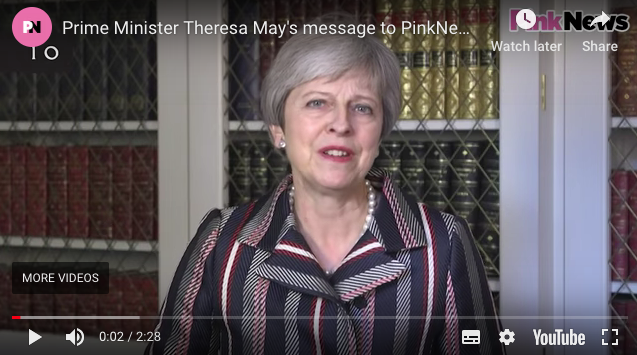 Several people have asked about the sermon we did last Sunday evening on ‘God made humanity male and female’ so I have posted it below.  But first I have included an open letter to Theresa May re a message she gave on the same subject.  Compare and contrast.

I have just watched your message to the Pink News awards ceremony.  Clearly you have other things on your mind as you seek to negotiate the tricky Brexit waters – we pray for you in that – so you were not able to go.  But your message puzzled me a little.

I realise that some of the LGBT community think that you are being hypocritical.  They remember how you voted for Section 28, against Same Sex adoption, although by 2013 you did vote for Same Sex Marriage.  They remember your line about the Tories being perceived as the ‘nasty party’ and they think that you are just trying to redress that image by being pro Gay rights.   I don’t think either they or I have a clue as to what your motivation or beliefs are, but lets assume that after careful thought and reflection you have changed your mind, and are not just going along with the zeitgeist for the sake of portraying a more ‘liberal’ image?  I wonder what caused you to change your mind?

Because there are some things in your message that are profoundly disturbing to me and to many people.  Indeed many ‘conservatives’ are wondering why the Conservative party seems to have adopted a more radical ‘liberal’ agenda than any of the other parties.

I have three questions for you.

Your 75 point action plan and the millions you will spend on it may seem desirable, but it is quite exclusive.  You are not doing the same for other groups who feel discriminated against.

2. Why are you still supporting the Gender Recognition Act?

Numerous groups and people have warned you of the enormous damage this will do.  Amongst other things it undermines hard-won women’s rights and enshrines in law a nonsensical and unscientific philosophy.   There may be an argument for allowing people, after proper treatment and help, to ‘identify’ as an other gender, but there is no argument for self-identification.  The promotion of a view of gender (that it is merely a social construct and nothing to do with biology) based upon the political ideology of Queer theory is the last thing that a Conservative government should be doing.   In this you are as radical and deluded as Jeremy Corbyn who has spoken out in support of your policy.    If your bill gets passed it will be an attack on women and a bill that ends up doing a great deal of harm to children – telling small children that they can choose their own gender in my view amounts to nothing less than child abuse.   In my view your policy on this is far more dangerous than the mess that is being made of Brexit.

3. What are your boundaries?

Did you really mean it when you said “I want the UK to be a country that works for everyone no matter who you love or how you identify?   It reminded me of an answer I got from David Cameron when it came to the question of SSM – “any two people who love one another should be able to get married”.  It has a nice sounding soundbite quality – but it does not bear even a second of rational examination.  The answer to your predecessor was simply  to ask “do you think two brothers should be able to marry?”.  Well no – of course not.  So the original premise was destroyed.  There are after all limitations.

What are your limitations?   Lets leave aside that the UK is not, and will not be a country that works for everyone (the poor, the marginalised and those unable to afford a good education can tell how unequal this country is – but of course you were not talking about economic, social and political justice, just sexual philosophy) and instead lets ask what your limitations are.  And what do you mean by love?  Are you going to permit polygamy for those who ‘love’ more than one person?  Why after all should love be restricted to two people?  Is polygamy now Conservative party policy?    Does it really not matter how you identify?  What if someone identifies as a dog ?   Or a racist?  Does it really not matter who they ‘love’ (I assume in this you are using ‘love’ as a euphemism for sex)?  The bottom line is that there are, and have to be limits….and boundaries.  I am just asking what are yours?

There is another message to the confused message that you gave out – a message that  is desperately needed.  Such is the confusion in our culture and country that we need the clarity of God’s word.  So last Sunday evening I preached to a full church about the philosophies and worldview that you are, whether inadvertently or not, adopting.  I doubt you will listen – but as a professing Christian maybe you should?  You certainly should listen to what Jesus says in his word and not think that you, or any government has the right to seek to remake humanity in its own image.  You can hear that message here….(although the way your government is going I would encourage people to listen soon before it gets banned as ‘hate speech’!)

In a time of confusion we need to seek clarity.  In a time of deceit we need to know truth.  In a time of pain, hurt and death we need to find life.  There is One who said that He is the Way, the Truth and the Life.  He also promises that if we seek Him we shall find.  Perhaps now more than ever we need the nation and its leaders to seek the Lord while he may be found, and to call on him while he is near.   Why not call for a day of prayer?  As many of your predecessors have done. Its Time for Nicola Sturgeon to Call A National Day of Prayer

Response to Prime Minister May – A Plea and a Prayer

Support Quantum of The Wee Flea