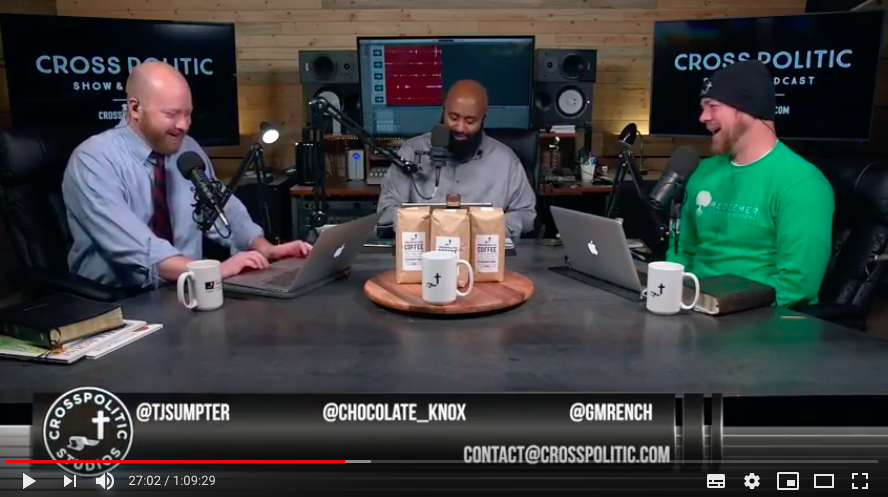 On Sunday I had the joy of being interviewed on the CrossPolitic programme – You can watch the whole programme here – (my part begins around the 26 minute mark).

I throughly enjoyed talking to these guys (although drinking malt from a mug is almost beyond the pale!)  and hope it is the beginning of a fruitful relationship, but I suspect that they might find that difficult.  The latter part of the show (when I was gone!) was largely a critique of Tim Keller and his ‘making peace with socialism’.   They asked what I thought – when I wasn’t there – so here is my answer. (sorry guys – but you did ask!).   I thought this article from Tim Keller in the New York Times was spot on.  But the stable from which CrossPolitic comes is of a somewhat different view.

Their Pastor, Doug Wilson was scathing about Keller….Prophetic or Political accusing him amongst other things of ‘cowardice’.  Why?  Because he didn’t mention abortion or Planned Parenthood.   He also stated “Socialism is theft. Christians who support it are supporting theft, and I am afraid Keller is among them.”

Of course, as with all Doug Wilsons work, this was well written, amusing and contained some good things.  I thought some of his critique was fair – but on the two points above he was not just OTT but wrong.  Firstly accusing someone of cowardice, who has made a stand in the midst of secular New York and seen the Gospel flourish and a significant difference being made, is not advisable – not least when you do so from the safe confines of your own community in Moscow, Idaho.    I know Tim Keller and he is no coward.  You can argue he was wrong.   You can argue he was unwise – but to accuse him of cowardice is not helpful.  It is also simplistic – was Jesus cowardly because he didn’t mention the Roman occupation or abortion in the sermon on the mount?

Carl Trueman has a good answer to those who accuse Keller of being a cultural Marxist – I loved this paragraph..

Let me be clear—while respecting him as a brother in Christ, I am not an acolyte of Rev. Keller. I disagree at points with both his theology and philosophy of ministry. Nor do I share his love of the city. For me, cities are a necessary evil whose sole purpose is to provide country boys like me somewhere to go to the theatre once in a while. And I am definitely not an optimistic transformationalist as he is—trust me, things are going to get worse before, well, they get even worse than that. But he is no cultural Marxist, and to call him such is to reveal not the politics of the good doctor but the ignorance of the troll. It is to indulge in the spirit of this age, which eschews thoughtful argument about difficult issues for moronic and often malicious soundbites. It is not a helpful way of locating him in current debates in order to further the discussion, but rather a cheap way of pre-emptively delegitimizing him and his opinions. It is an unwarranted slur on his character, for we all know that cultural Marxism is not intended as a morally neutral term. And—I almost forgot—it is to break the Ninth Commandment about a Christian brother. And that’s a sin—not so much a sin against Tim Keller as against the God he serves.

Wilson, who normally presents a thought out and carefully constructed argument, lets himself down with this rather simplistic ‘logic’.  Premise one – socialism is theft.  Premise two – Christians don’t steal.  Keller is a socialist therefore Keller is a thief.  The trouble is (apart from the crass, crude name calling) is that the whole argument is based on a false premise.  Socialism is not necessarily theft.  Its as though I said – Capitalism is murder.  Christians don’t murder.  Doug Wilson is a capitalist therefore he is a murderer.  Its a dumb argument- not least because I don’t know, and I don’t care whether Wilson is a Capitalist.    I do know that Tim is not a socialist….in fact he’s a bit right wing for my liking!   I guess it comes from mixing with all those New York bankers!  And in case you wonder – I don’t think capitalism is necessarily murder any more than I think that socialism is necessarily theft.

Is Socialism Satanic? – Why has the Alliance of Confessing Evangelicals gone all Political?

Socialism is not stealing – unless you are prepared to say that all forms of taxation are stealing. If so, then you are of course going against Christ who said “Give to Caesar, the things that are Caesar’s.” So what Mr Phillips is really saying is that if you do not like what the government is using your money for then you just call it stealing. This strikes me as a somewhat illogical and cavalier way to use the Scripture as some kind of justification for your politics. We may disagree about what precisely the role of government is but that does not give us the right to claim that only our view is scriptural and all other views are evil. Defence, protecting the weak, punishing evil doers etc. are accepted by all but the most extremist libertarians. However, there has been a long Reformed tradition that argued that the role of government extends beyond that.

“Calvin saw civil government as an opportunity for good. Schools and roads could be provided to benefit both the rich and the poor. New hospitals and prisons were also a part of the social reforms he encouraged.” Gary Z Cole – John Calvin on Civil Government.
Imagine that. Calvin was for ‘Socialised Medicine! Besides which there is a far stronger case to argue that unfettered market capitalism, with its reliance on high interest rates (which always harm the poor most), is far more unbiblical.

Finally this from Keller’s NYT article sums up my position (as one of the Scottish Highland Presbyterians referred to).  Don’t de-Christianise those who disagree with your political viewpoints…and don’t make your political viewpoints the test of Christian orthodoxy.  The American church has largely gone down that route.  You have sown the wind and now you are reaping the whirlwind.

I know of a man from Mississippi who was a conservative Republican and a traditional Presbyterian. He visited the Scottish Highlands and found the churches there as strict and as orthodox as he had hoped. No one so much as turned on a television on a Sunday. Everyone memorized catechisms and Scripture. But one day he discovered that the Scottish Christian friends he admired were (in his view) socialists. Their understanding of government economic policy and the state’s responsibilities was by his lights very left-wing, yet also grounded in their Christian convictions. He returned to the United States not more politically liberal but, in his words, “humbled and chastened.” He realized that thoughtful Christians, all trying to obey God’s call, could reasonably appear at different places on the political spectrum, with loyalties to different political strategies.

CrossPolitic – loved being on your show….if you are still speaking to me happy to come back I’m game!

Engaging with Keller – A Review