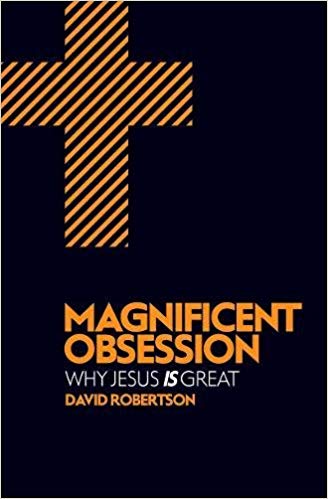 This weeks thought for the day from Premier.

In a week when I have been reminded of the weakness of insipid Christianity – it’s always good to be able to turn to the real radical thing!This talk was based upon chapter 7 of Magnificent Obsession.  From which the following quotes are taken:

“These that have turned the world upside down are come hither also” Acts 17:6

In my former book, Theophilus, I wrote about all that Jesus began to do and to teach 2 until the day he was taken up to heaven, after giving instructions through the Holy Spirit to the apostles he had chosen. (Acts 1:1-2).

“Being with Jesus and being sent by him seem at first sight mutually exclusive, but they clearly belong together. The apostles have to learn to be with him in a way that enables them, even when they go to the ends of the earth, to be with him still. Being with him includes the missionary dynamic by its very nature, since Jesus’s whole being is mission.” (Pope Benedict p.172)

The Epistle of Mathetes to Diognetus written less than 100 years after the death of Christ indicates one of the reasons why Christians had such an impact in the Roman Empire. “The Christians are distinguished from other men, neither by country, nor language, nor the customs they observe. The course of conduct which they follow has not been devised by any speculation or deliberation of inquisitive men; nor do they, like some, proclaim themselves the advocates of any merely human doctrines. But, inhabiting Greek as well as Barbarian cities, according as the lot of each of them has determined, and following the customs of the nations in respect to clothing, food, and the rest of their ordinary conduct, they display to us their wonderful and confessedly striking method of life….They marry as do all; they beget children, but they do not destroy their offspring. They have a common table but not a common bed. They are in the flesh, but they do not live after the flesh. They pass their days on earth, but they are citizens of heaven.” (The Anti-Nicene Fathers, Vol 1 p.26).

A pagan writer Lucian of Samosta in AD 170 gave his reasons for the growth of Christianity – “The Christians you know, worship a man to this day – the distinguished personage who introduced their novel rites, and was crucified on that account…You see, these misguided creatures start with the general conviction that they are immortal for all time, which explains their contempt of death and their voluntary self-devotion which are so common among them; and then it was impressed on them by their original lawgiver that they are all brothers, from the moment they are converted, and deny the gods of Greece, and worship the crucified sage, and live after his laws” .

“And we confess that we are atheist, as far as gods of this sort are concerned, but not with respect to the most true God, the Father of righteousness and temperance and the other virtues, who is free from all impurity”. (The First Apology of Justin Martyr – Anti-Nicene Fathers Vol 1 p.164).

“I am only saying that the blessed and happy state of the Church always had its foundation in the person of Christ.” (Institutes 2:VI: 2)

. “In the church are mingled many hypocrites who have nothing of Christ but the name and outward appearance.” (Book 4:1:7).

“Whenever we see the Word of God purely preached and heard, and the sacraments administered according to Christ’s institution, there, it is not to be doubted, a church of God exists” (Institutes 4:1:9)

Augustine “Our Lord Christ has bound the fellowship of the new people together with sacraments very few in number, very excellent in meaning, very easy to observe” Cited in Institutes 4:10:14.

“How often did Christ and his apostles foretell that pastors would pose the greatest dangers to the church? (4:9:4)

. “The temptation to use power to secure the faith has risen again and again in varied forms throughout the centuries, and again faith has risked being suffocated in the embrace of power (Pope Benedict p.40).

. “The gospel not only converts the individual, but it changes society. On every mission field from the days of William Carey, the missionaries carried a real social gospel. They established standards of hygiene and purity, promoted industry, elevated womanhood, restrained anti-social customs, abolished cannibalism, human sacrifice and cruelty, organised famine relief, checked tribal wars, and changed the social structure of society” (Samuel Zwemer, Professor of Missions at Princeton cited in Bill Bright p.80).

Strangely I find that faith in Christ and science go together, feeding off one another. Far from belief in God being some sort of irrational leap of faith it is the most rational hypothesis there is; and perhaps it is the only plausible and sure foundation of the rationality of the universe that science presupposes. Keith Ward p.82.