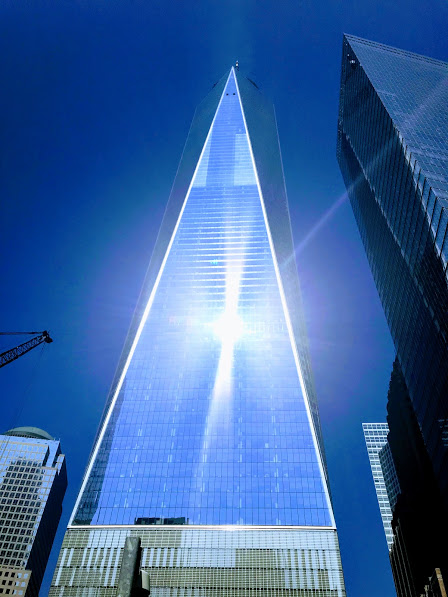 Following on from yesterdays post about the significance of the psalms, it seems to me that where they really come into their own is the way they allow us to express our emotions both personal and corporate – especially in times of crisis.   Today is 9/11…what psalms would speak to that situation?

Those who know your name trust in you, for you, LORD, have never forsaken those who seek you. 11 Sing the praises of the LORD, enthroned in Zion; proclaim among the nations what he has done.

It’s a psalm that speaks about God being a refuge for the oppressed, being the avenger of blood, the one who does not ignore the cries of the afflicted and asks for him to act.  He is the Lord who is known by his acts of justice whilst ‘the wicked are ensnared by the work of their hands”.  He is a God who will never forget the needy.  Arise Lord, , do not let mortals triumph;  Let the nations be judged in your presence.  Strike them with terror, Lord; let the nations know they are only mortal”.

I especially like the metrical version of this that we sing:

9 The LORD is a stronghold in times of distress,
A refuge for those whom the wicked oppress.
10 Your people who know you will trust in your grace;
You’ve never forsaken those seeking your face.

11 Praise God, who in Zion has founded his throne;
Proclaim to the nations the deeds he has done.
12 The cry of afflicted ones rings in his ear;
Their blood he avenges, their plea he will hear.

Last month myself and Annabel were able to visit the 9/11 memorial museum  I wasn’t sure what to expect – but it was stunning, stimulating and sobering.

The museum has been very well done.  It is not overstated or hyperbolic….it simply tells the story of what happened on that horrendous day – largely through the eyes of the people who were there.  I was particularly impressed that it does not ignore the motivation and background of the hi-jackers. 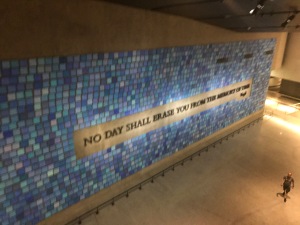 I found this mosaic to be particularly thought-provoking.  Virgil’s statement “No day shall erase you from the memory of time” is in some senses true.  But not if you are a naturalist atheist – because you believe that time will one day disappear and ultimately that we are all blobs of carbon going from one meaningless existence to another.  It’s a nice but irrational sentiment from an atheist perspective.  On the other hand the Christian believes in a God who will one day judge all the deeds of time – and bring justice.   The terrorists scored a great victory (in human terms) in their destruction of two of the most iconic symbols at the heart of Western Capitalism.  Muttering that they achieved nothing (when they did) or giving truisms that the victims will never be forgotten (they will), does not really help.  Knowing that there is a God of justice…does.

The three photos below also tell their own story:

One would hope that the destruction of the Twin Towers would create in us a sense of humility and frailty.  We are not the Masters of the Universe.  I remember standing at the top of the Empire State Building on my first time in NY, looking at the Twin Towers and thinking, one day these will fall.  We should be careful how we boast about our strength.  I did not expect to see that happen in my life time!    But there is little sign that the lesson is being learned.  We are still relying on our gods that money can buy and create (the mega shopping mall underneath the streets, the new super-duper tower) – and our view that we can re-create humanity in our own philosophical image.   Of course everyone is different and everyone is the same – but not in the fanciful humanist sense that I suspect this slogan was attempting to teach.  We are all different because our Creator is a Creator of infinite variety.  We are all the same because we are all made in his image.

Another piece of music which expresses so much is the Who’s “Won’t Get Fooled Again’  which they performed at The Concert for New York City”.  For some reason YouTube has removed it….but here is a recording of them singing it another time…

Lord, see how my enemies persecute me!  Have mercy and lift me up from the gates of death, that I may declare your praises in the gates of Daughter Zion, and there rejoice in your salvation”  (Psalm 9:13-14)