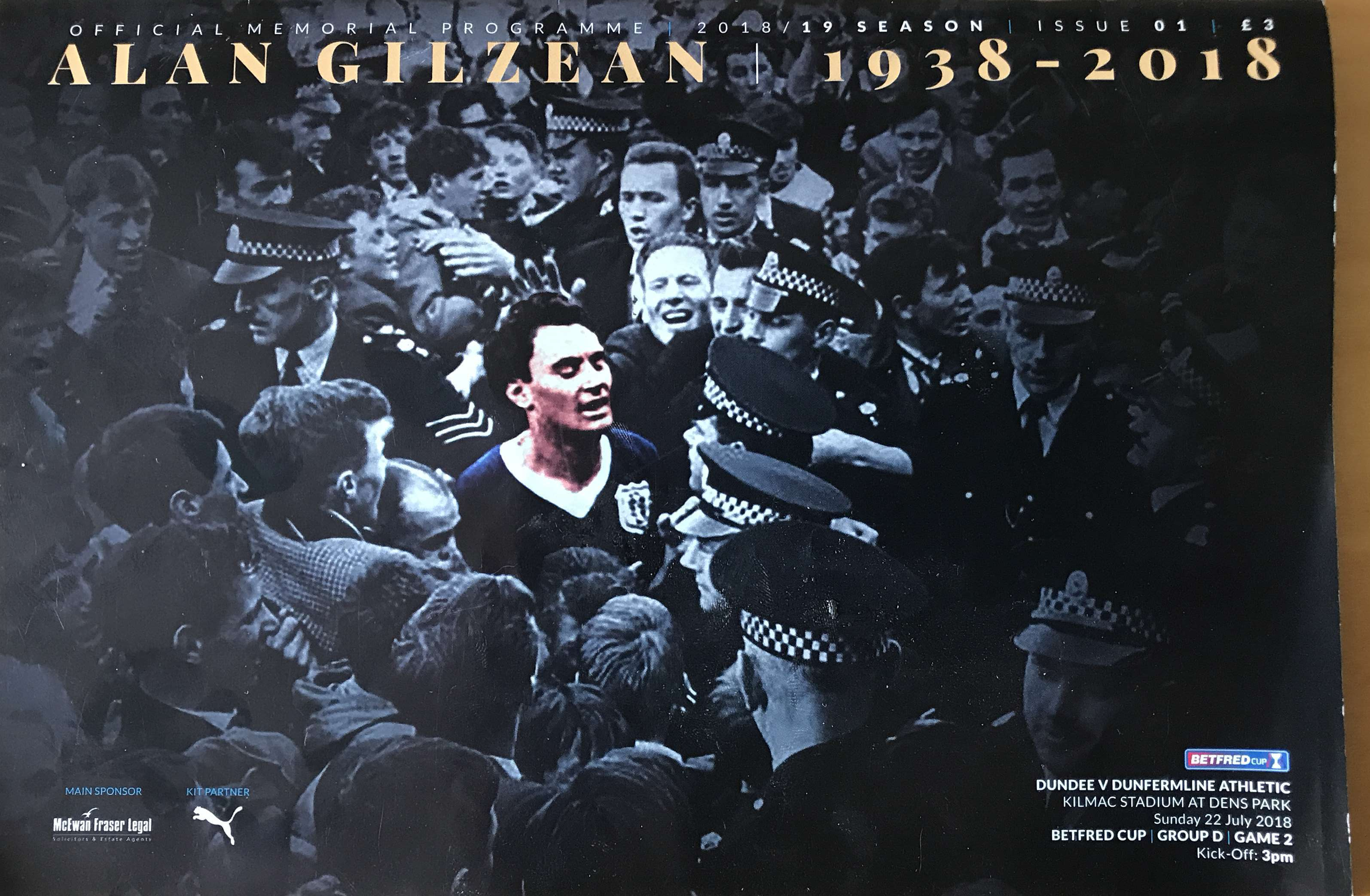 One sign of the church becoming a growing part of the community is when you end up taking the funerals of those who are well known within it (as well as the poor and the less known).  In the past year I have taken the funeral of a leading politician (Gordon Wilson) , a police hero (James Melville) and then last week Alan Gilzean – the best footballer Dundee has ever produced. 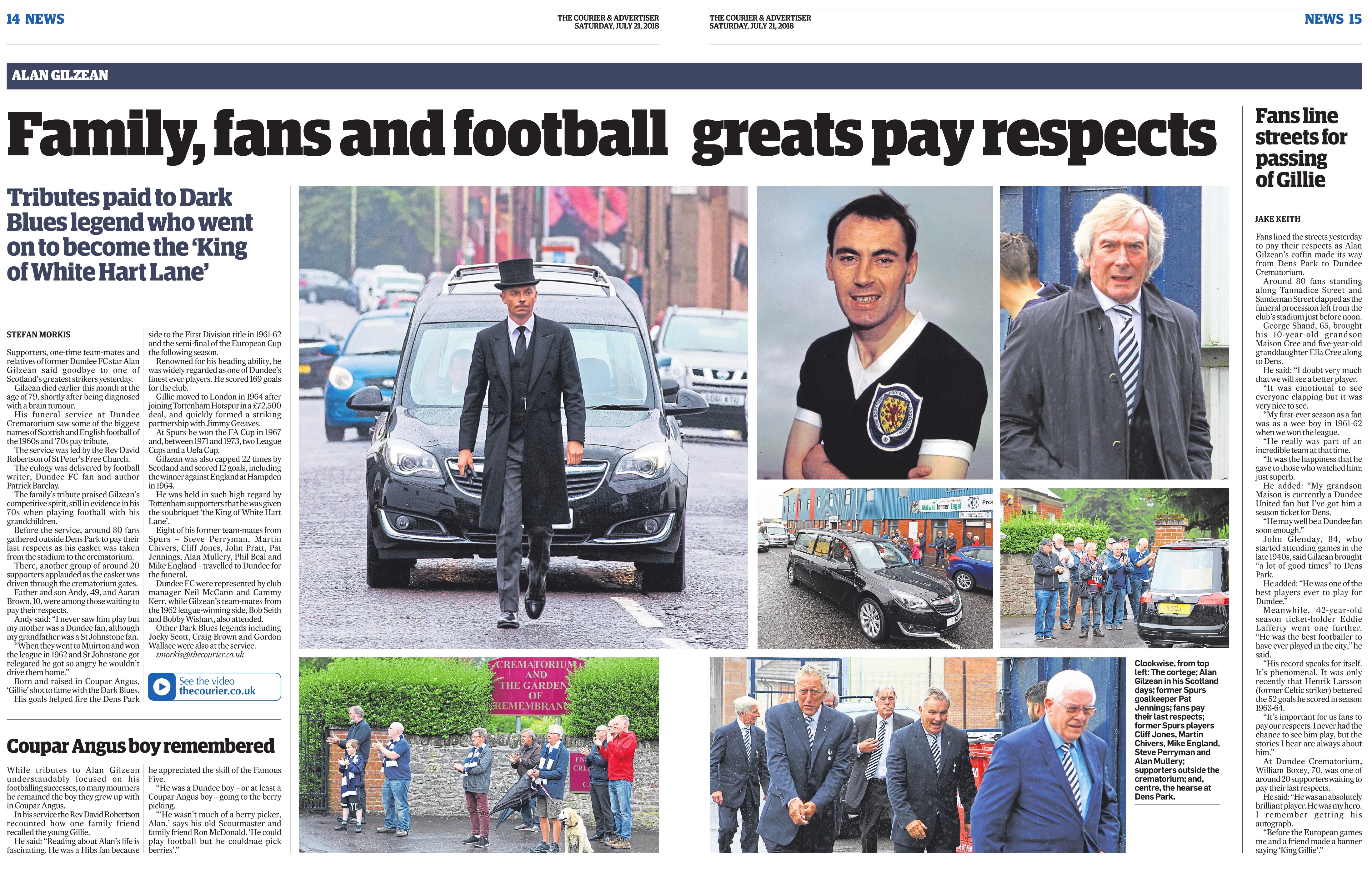 I was a little surprised that the funeral was not better attended.  The crematorium was full (with about 200 people) and there were knots of fans at the entrance and at Dens Park – but when you know how much Gilzean was revered and is in many ways legendary, I had thought there would be far more.  I wonder if it is because as a society we have lost our sense of ritual and community commemoration?  Everything is so short-term and transient.   We do things on line and in a virtual world.  We don’t know how to live or die in the real world.

For me the funeral was one of great sadness. It was good to meet and connect with different people, family, footballers and fans, and to give thanks for the life of Alan Gilzean.  But overall it was a very sad occasion – as it should be.  Colin Brazier in this superb article in The Spectator argues:

There’s nothing funky about turning death into a fashion parade and a free-for-all of self-realisation. It is asinine and, if it inhibits the necessary catharsis of the grieving process, it may end up being a mental health time bomb. The old stuff — the black and the solemn — works because it distills the wisdom of ages.

Despite the Humanists trying to impose their ideology on the whole of society and turn every funeral into a garish advert for their club – (see this article from yesterday) , most people actually do like ‘a bit of religion’ although its actually very hard to speak when people have no idea what its all about.  I always agree to do funerals on condition that the family understand that as well as the eulogy, the cremation and the music, there will be a bible reading, prayer and a short talk.    As I looked out over the packed crematorium I felt a deep sorrow for the people there and prayed that those who heard would look for an answer to the questions that death inevitably raises, and that they would find that answer in Christ.

The following are my notes of the talk:

This is a time for us to mourn the passing of Alan and to celebrate his life. It’s also a time for us to reflect. It’s a privilege to be here. My name is David and I’m the minister of St Peters Free Church on the Perth Road. I was also chaplain at Dundee FC and am a Dundee fan. So although I didn’t know Alan in a sense I felt I did. I wish I could say Eh Mind O Ghilie! (Those from Spurs – note that its spelt i.e. not y!) – But I’m too young!

There is a time for everything. Mr McCann (Dundee manager who was present) there’s a time for Dundee to win the league again – it was 1962 – the year I was born!

Family tribute: Alan was born on 22 October 1938 to William and Barbara a younger brother for Eric and Thelma. At school he enjoyed all sports and was a member of the Boy Scouts and enjoying Jamborees with them. On leaving school his mum enrolled him on a typing course and he started work in Perth. While playing for Coupar Angus Juniors, he also enjoyed golf and cricket and his trophy for catch of the season took pride of place.

He completed his National Service with The Royal Army Corps in Aldershot where he also turned out for the local team. He left Dundee in 1964 and moved to Tottenham settling in Enfield. He married Irene in 1965 and they went on to have 2 sons, Kevin & Ian. On leaving Spurs he had a short spell with Highland Park in South Africa and then had a brief spell managing Stevenage. He worked as a transport manager in the haulage industry before retiring to care for his dad. He moved to Weston Super Mare and enjoyed a quiet life out of the spotlight, enjoying walking and helping the blind. He loved spending time with his grandchildren, Amy, Cameron, Harry & Max & Miles.

When visiting Ian in Carnoustie he would walk the dog and talk to everyone and watch the local juniors and amateur sides. He would take Cameron and the dog out along the beach and find treasure that they would bring home, which in turn got binned rather quickly. His teenage granddaughter Amy had a party one summer when he was in his element answering questions having his picture taken and signing autographs. He also enjoyed watching His grandsons play football. He pulled his hernia when he tried showing harry Max & miles a few of his skills at the Park when he was in his 70’s!

He started to attend matches at Dens when he was visiting which in turn led him to returning to White Hart Lane first to see Spurs play then latterly working as a match day host which he loved, being in the company of all the ex players and sharing stories. Ian was then promoted to be dad’s pa. He would call telling Ian he needed a room booked at a certain hotel. Despite being told all he had to do was call them and give them his details, his reply was “I’m not giving out my bank details over the phone, do it on your card and give me a call when you have booked it”.

Dad was very competitive whether this was playing badminton or golf with Kevin and Ian to cards cricket connect 4 or dominoes with the grandchildren. Not an inch was given, and he would celebrate a victory. He was much loved & will be missed by all.

Further thoughts.  Reading about Alan’s life is fascinating. He was a Hibs fan because he appreciated the skill of the famous five.

He was a Dundee boy – or at least a Coupar Angus boy – going to the berry picking “He wasn’t much of a berry picker, Alan,” says Ron McDonald, his old scoutmaster and family friend. “He could play football but he couldnae pick berries. His mother was a good berry picker and he would be working under her supervision, but he would probably play football at the end of the drill.

Enough has already been said about the football – Bob Shankly was the Dundee manager in 1962 – his brother Bill who went to manage a lesser club in England (somewhere called Liverpool) stated.–“Some people think football is a matter of life and death. I don’t like that attitude. I can assure them it is much more serious than that”

. But there are things that are more important. Football provides entertainment, joy and grief and for some of you, a living.  Go through these sayings in Ecclesiastes and you can apply them all to football. As a Dundee and Scotland fan we have known many times to mourn – but also times to dance! But football should never be a substitute idol. Family, friends, health and our relationships are all more important.  But most important of all is our relationship with God. He has set eternity in our hearts – he has made everything beautiful in its time.  St Augustine said “our hearts were made for you and they are restless until they find their rest in you.” That is why God sent his son Jesus – to die for our sins – to give us new life. My hope and prayer is that in the midst of death you will come to know that life. May Christ’s peace and joy become yours this day.

Gordon Wilson – A Man of Integrity and Intelligence