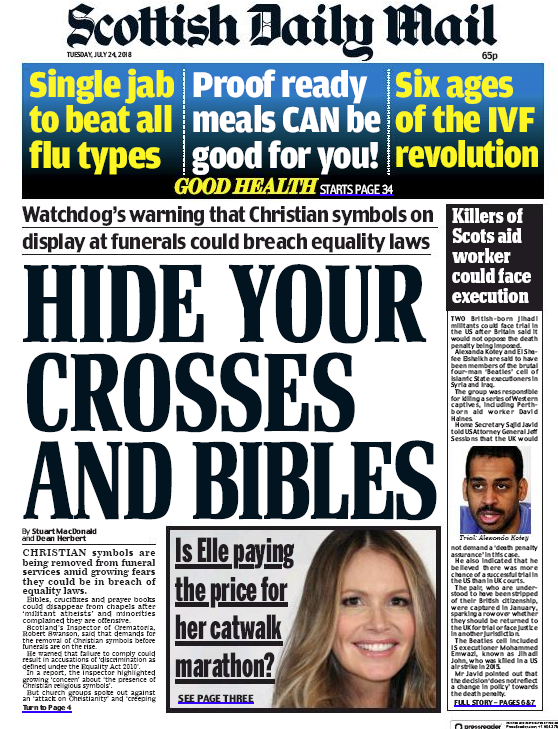 Cycling home last night I received a phone call from a journalist who wanted to ask my views on a story he was covering.  When he told me the story I had to stop before I fell off my bike.  Could you repeat that?   He did. This is the story.

HIDE YOUR CROSSES AND BIBLES

Christian symbols are being removed from funeral services amid growing fears they could be in breach of equality laws.Bibles, crucifixes and prayer books could disappear from chapels after ‘militant atheists’ and minorities complained they are offensive.

Scotland’s Inspector of Crematoria, Robert Swanson, said that demands for the removal of Christian symbols before funerals are on the rise.He warned that failure to comply could result in accusations of ‘discrimination as defined under the Equality Act 2010’.In a report, the inspector highlighted growing ‘concern’ about ‘the presence of Christian religious symbols’.

But church groups spoke out against an ‘attack on Christianity’ and ‘creeping secularisation’. In his annual report, Mr Swanson wrote: ‘A matter which has recently been raised relates to the lack of inclusive space for interment or scattering of ashes for those of a non-Christian faith or of no religion.’

He added: ‘There have also been concerns raised over the presence of Christian religious symbols, particularly the “cross” in chapels and gardens of remembrance.There have been a number of occasions where at the request of applicants steps have been taken, where practical, to remove or conceal the cross (in chapel) for the duration of the service.

‘The inspector is involved in ongoing discussion with a number of stakeholders, and has met with the Humanist Society of Scotland to address some of these concerns. ‘It is their view that current practices leave their 15,000 members and those of other non-Christian faiths and beliefs open to discrimination as defined under the Equality Act 2010.’

One source of complaint has been the automatic laying out of Bibles and prayer books on seats before funeral services.

The Rev David Robertson, former Moderator of the Free Church of Scotland, said: ‘This is an attack on Christianity by militant atheists and secular groups under the guise of the Equality Act.

‘Most people in Scotland are nominally Christian and even if they are not particularly religious, they will have a Christian funeral service.‘This is an example of the Equality Act being used to create less equality. What if a Catholic complained that there wasn’t enough symbolism at a crematorium?‘Or if a crematorium was painted blue and someone decided it discriminated against a Celtic supporter?‘Taken to its extreme, it will result in crematoria becoming bland and featureless.’

Ciaran Kelly of the Christian Institute said that Scotland ‘should be wary of creeping secularisation in the guise of equality’.

But Gordon MacRae, chief executive of the Humanist Society of Scotland, said: ‘Modern Scotland is both diverse and increasingly non-religious but some parts of the public sector are yet to catch up. We see that with things like crematoria.‘The crematoria issue is particularly painful for a lot of people. If you had a negative experience of religion, it’s a very difficult time for somebody to have to mark the passing of a loved one in a way that feels dishonest or brings back bad memories. What we want to get away from is a default setting that just assumes everyone is Christian.’

Julie Dunk of the Institute of Cemetery and Crematorium Management said: ‘We would recommend that crematoria chapels are open to all denominations and none.

‘They should comply with a family’s request to have crosses or symbols removed or covered up wherever possible.‘Sometimes, however, the symbols are built into the fabric of the building or the surrounding landscape and removing them would be as upsetting for some people as seeing them would be for others.’

A Scottish Government spokesman said: ‘Each crematorium in Scotland is different – some have religious symbols displayed in their chapels and service rooms, some do not. In every case the Inspector of Crematoria asks that the wishes of the deceased, their family and next of kin are carefully and sensitively considered.’

So this is what Equalities legislation is used for – in the name of ‘equality’ all Christianity must be removed from public life?  Society has to be ‘neutral’ (which means secular humanist).  Get a couple of people to complain and the Scottish governments inspectorate will comply.   This is not ‘equality’.  It is petty discrimination.

The Humanists are either delicate snowflakes who are triggered by any Christian symbols or just petty and vindictive people who will use anything to attack Christianity.  But perhaps they have a point?  Maybe all organs should be removed in case a strict Free Presbyterian is upset?  Maybe we should ban cut flowers in case someone who believes that all plants are living creatures that need to be protected, wants to use the facility?   Maybe we should ban memorial plaques for the sake of those who are triggered by the use of gender specific names?  Or keep all cars out of the crematorium car parks because of those who have had bad experiences of cars?

Has there been a mass (sorry about the RC connotations for any ultra Protestants who get triggered by that word – I do want to be ‘equal’) of complaints? I doubt it.  I have taken many funerals of non-religious people in crematorium and have never had any complaints.  Indeed I did one last week.  I even read the Bible and prayed and was thanked by one of the non-religious people there for making it ‘personal, funny and especially religious”!  If the poor Humanists had been present I suspect I may have had another funeral to do – such is their level of sensitivity!  (Mind you the last humanist funeral I was at – the first five minutes were spent advertising the humanist society).

What’s next in the name of equality?  Should church spires be pulled down because they are taller than other buildings (it’s not fair on bungalows!) or, as is happening in China, because they have crosses on them?  In an ‘equal society’ one can hardly expect the poor Humanist snowflake to have to gaze upon such symbols of religious oppression as they travel home on the bus!

And look at the language.  The inspectorate consulted ‘stakeholders’?  The only ones mentioned are the humanists, but as far as I know they did not consult the Free Church or many other churches.    The sad thing is that the journalist told me that the Church of Scotland were supporting their humanist allies.  Can that be true?  But then why should I be surprised?   The C of S has just become the Humanist society at prayer (remember the C of S/Humanist alliance on School chaplains?)

Welcome to  21st Century Scotland – where it is deemed offensive and against equality by a government official to have a Christian cross in a memorial garden.  Just let that sink in…

PS. Please note that the people who are complaining are not those of other faiths. It’s the secular humanists – who never miss the opportunity to attack Christianity…(they are not quite so bold when it comes to Islam!)…Our Muslim neighbours not only have no problem with Christian symbols – they expect them. And even send us Christmas cards with them!