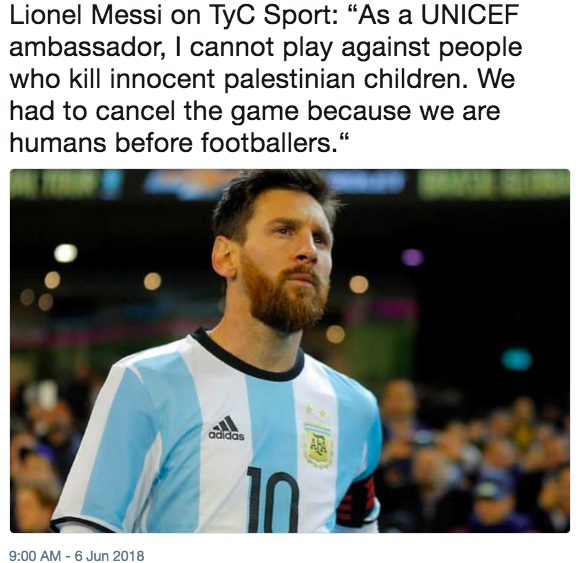 The following story is a great example of how social media can be a great tool for evil in our society.   It began with a tweet that certainly got me going….

I wondered why Mr Messi and his fellow Argentinian players were being so selective.  Were they going to refuse to play China, Iran and North Korea – or is it only Israel that gets selected for such ‘special’ treatment?   And then I discovered that I was wrong…not so much in the reaction but because the tweet was a lie – that has been sent all over the world – and retweeted by politicians within the UK, who I hope will have the decency to tweet out the correct story.  This is as follows.

The Argentinian team were looking forward to going to Jerusalem for their world cup preparations where it was rumoured that the Pope was going to send a special emissary to conduct a special mass for the team.   Messi, the team captain … said: “I really want to visit the Holy Land and for Argentina this will be an important professional and spiritual journey and I’m convinced that coming to Israel ahead of the World Cup will do us good.”

The last time this happened was in 1986 – when Argentina went on to win the world cup in Mexico.

The Palestinian Football Association  urged fans to burn pictures of  Messi and replicas of his shirt if he played against Israel in Jerusalem. (Palestinian FA chief Jibril) Rajoub declared a campaign against Argentina and particularly Messi, noting he has millions of fans across the Arab and Islamic world, Asia and Africa. “He’s a big symbol so we are going to target him personally and we call on all to burn his picture and his shirt and to abandon him. We still hope that Messi will not come” … A small group of youths wearing Palestine soccer scarves demonstrated outside the representation office and attempted to set fire to an Argentinian flag.

On the 6th of June Argentina team announced they were cancelling the match.  For Palestinians … there was jubilation. They praised the Argentine team for taking a stand against Israel … Jibril Rajoub, president of the Palestinian Football Association, said … he did not make any threats and was involved only in peaceful protests …A senior official at the Argentine Football Federation says the national team decided to cancel its match with Israel after receiving threats from the Islamic militant group Hamas. … The official (spoke) on condition of anonymity due to safety concerns …

“As a UNICEF ambassador I cannot play against people (Israel) who kill innocent Palestinian children. We had to cancel the game because we are humans before footballers.”

It’s a complete fake – as the Times of Israel reported

As a father and a UNICEF Goodwill Ambassador, I am terribly saddened by the images coming from the conflict between Israel and Palestine, where violence has already claimed so many young lives and injured countless children.Children did not create this conflict, but they are paying the ultimate price. This cycle of senseless violence must stop.We must reflect on the consequences of military conflicts and children must be protected.

I am sorry for simply believing what I read about Messi.  This is my apology.  Feel free to pass it on so that people can know the real story.