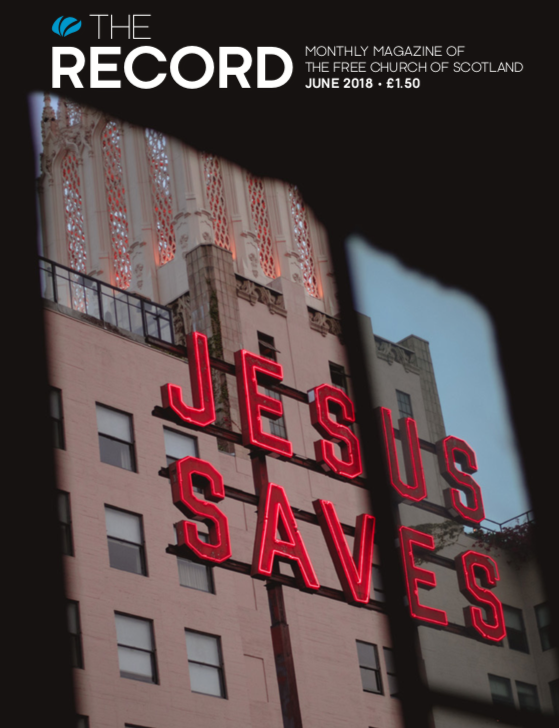 This is the editorial from the June Record.  You can purchase a digital copy here – for the ridiculous price of £1.50 (or equivalent).

Watching the BBC documentary ‘Six Weeks to Save the World’, about Billy Graham, was utterly fascinating. The 1950s was a different era and a very different Scotland. The majority of people were associated with the church, and holding a six-week massive evangelistic campaign in the Kelvin Hall made a great deal of sense. It would be impossible to do that nowadays.

I was intrigued by the people I actually knew in the documentary – though I was not even a gleam in my father’s eye at that time! What also struck me was the level of cynicism from the Rev. Johnston Mackay, who himself has done a great deal of harm to the cause of the gospel in his stewardship as BBC Scotland’s religious affairs producer. I am not primarily concerned in this editorial with the impact of the Graham crusades, which, whilst not as effective and long-lasting in their impact as his 1959 Australian crusade, nonetheless were not as ineffective as the programme claimed.

Many people were converted and that did have a lasting impact on Scotland – even if it was not as much as we would like. My own father was greatly affected by one of the relay meetings. I recall a Free Church lady who told me that she went to meet Billy Graham off the train because she knew ‘he was the man that was going to convert me’. She attended every single meeting for the six weeks before she went forward at the last meeting. I also recall a ministers’ conference where a number of men were being highly critical of Billy Graham and his methods. Free Church minister David Paterson was not impressed by this, and in his own inimitable way stood up and said, ‘Brothers, how many of you were converted through Billy Graham’s ministry?’ Apparently it was about half of them!

I am also reminded of DL Moody’s famous retort to someone who was complaining about his methods. ‘I prefer the way I do evangelism to the way you don’t!’ We need to consider carefully how we communicate the gospel in today’s Scotland.

My view is that they were not radical enough. Too many people saw them as opportunities to recruit people for the church, and not for Christ. Or perhaps it would be better to say that the church was not radical enough. I don’t think the problem was primarily with the crusades – but rather with the churches that many people were then fed into. The church in Scotland has declined because in many areas we have turned away from the Word of God. Some have retreated into an unbiblical legalism, but it appears as though the vast majority have gone the opposite direction, into a liberalism that takes away from the Word of God. When the storm winds of the 1960’s swept into society (sexual permissiveness, anti-authority attitudes and materialism), the church, weakened from within, was not able to stand. Today, if you want to see where we are, just consider the following couple of headlines from the Church of Scotland Assembly: ‘Church of Scotland Moves Closer to Same Sex Marriage’ and ‘Church of Scotland Could be Close to Extinction by 2030’. The problem is the church, not the society.

2) Do we need another Billy Graham in Scotland today?

No. It’s a different era and something other than crusade evangelism is needed. Crusade evangelism was relevant in an era when vast numbers of people were predisposed to go to church. That is no longer the case. It is doubtful whether 5% of the Scottish population regularly attends church. When Franklin Graham came to Perth we struggled to even half fill the 10,000-seater Perth stadium. The money would be better spent in other ways. We don’t need one Billy Graham or Ravi Zacharias. We need 10,000.

3) How do we bring the Good News to Scotland today?

This is the £64,000 question. The main difficulty is that much of our evangelism is based on outdated models that are more appropriate to another age. Let me explain it in this way. Let’s imagine that there is an evangelism scale of one to ten, where at level ten people know the Scriptures from back to front, study Calvin’s Institutes and regularly conduct Bible studies in Greek and Hebrew. At level one are those who, when you ask them to turn to page one of the Bible, ask ‘What’s a Bible?’ The trouble is that much of our evangelism is aimed at around level 4 and 5. We both assume too much and expect too little.

Can I suggest that evangelism in 21st-century Scotland needs to follow the seven C’s?

Creativity – We need to be much more imaginative in how we communicate the Gospel. Creativity is in the nature of our Creator and he has made us in his image.   There is a danger in being programmatic. There are no programmes that, useful as they are, will be the key for evangelizing Scotland. We need to set our people free to be creative as they seek to bring the Good News to the people of Scotland.

Courage – This is not going to be easy. There is hostility to the Gospel in much of contemporary culture, and even within the Church. The temptation is to keep our heads down and claim that we are quietly working away. But there comes a time to speak up and speak out. With great boldness the apostles testified to the saving grace of Jesus. Where is our boldness?

Compassion – Harshness and evangelism should be strangers to one another. But sadly fear, sin and frustration can cause us to react with hardness and hostility to those we are seeking to evangelise. That must never happen. Our hearts should break for those who are dead in sins and trespasses and who are on their way to a lost eternity. The Gospel is not ‘you are saved’ – it is ‘you can be saved if you come to know Christ’.

Confessional – There is a view that theology and evangelism don’t mix. In the hysteria surrounding the sermon of Bishop Michael Curry at the Royal Wedding in May, there were those who suggested that just because his sermon mentioned Jesus, the Bible and the Cross, it was a great gospel sermon which should be warmly welcomed. I was personally dismayed to see how many Free Church people fell for that. Bishop Curry does not believe the Bible, does not accept the Jesus of the Bible and his version of the love of Christ on the cross was that it was exemplary, not an atonement. He persecutes those in his own denomination who hold to a biblical position on marriage, and yet so many of us welcomed what he had to say. My fear is that we are so desperate that we are willing to accept heresy as long as it seems to offer an opportunity to speak about Christ. Such an approach is fundamentally flawed.

Contemporary – We don’t live in the 1st, 16th or 20th centuries. We live in the 21st century with all its opportunities and problems. We need to study our culture. We need to understand how people think. We need to grasp the wider picture of what is going on. We need to listen to our local communities. And then we need to make sure we are speaking to the people who are there, not the ones we imagine.

Christ-centered – This is the key. We do not proclaim ourselves, but Jesus Christ as Lord. Of course we all agree with that in theory, but is it our practice? We are not about proclaiming the Free Church, or ourselves, or building up our church. We want people to see the beauty and glory of Christ – and we want him to be glorified through the building up of his Church. When that is our desire we will fervently pray, bear witness and work with all his energy to bring his good news to all the people of Scotland and beyond.

‘Therefore go and make disciples of all nations, baptising them in the name of the Father and of the Son and of the Holy Spirit, and teaching them to obey everything I have commanded you. And surely I am with you always, to the very end of the age.’ Matthew 28:19-20