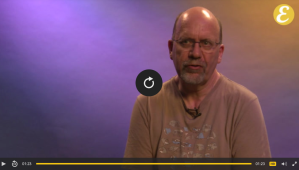 This is a news story based on an interview with Eternity magazine in Sydney.  I didn’t realise the interview was going to be filmed (it lasted over 30 minutes) – hence my attire.  You can watch their edited highlights of the clip here –   The text of the report is below.  I also find it interesting how they summarised the interview. There was of necessity a lot left out…I’m more intrigued by what they left in…!  The text is below…

The church, not secularists, are responsible for our own decline

We need more public Christians, even though being a Christian in public is getting tougher, says David Robertson, a Presbyterian pastor from Scotland – a nation that has “secularised quicker than any other nation in history”. Robertson adds, “The situation in Scotland is a real warning to people in Australia.”

As well as pastoring St Peter’s Church in Dundee, Robertson runs CPC Solas, which is similar to Australia’s Centre for Public Christianity. While visiting Australia on sabbatical he has been persuaded to talk at events such as the Katoomba Christian Convention and to Eternity.

“We were known as ‘the land of the people of the book’, the book being the Bible,” he says about Scotland. “Even as late as  the 1950s you’d have 1.4 million out of 4.5 million people being members of the Church of Scotland, as well as Catholics and other groups.”

Today the Church of Scotland’s membership  is below 300,000. Scotland is on a rapid slide downhill, both in church attendance numbers and in “the quality of churches and the impact on society. We are throwing overboard our Christian heritage right, left and centre and that will come back to bite us.”

Robertson does not blame secularists as the main cause for the decline in Christianity in Scotland. The church itself is “the primary reason” for the decline – and he’s not not just talking about liberal Christians, which, as a conservative, he might have been expected to target.

“My own denomination, the Free Church of Scotland, was founded in a spirit of evangelical renewal and revival,” he says.

Then in the 1870s, its colleges took on, to some degree, German Higher Criticism – an academic movement that questioned the authority of the Bible – and the influence of that worked its way through the church like a cancer over the next 50 or so years.

While there were still congregations of Bible believers, those teaching them often went astray. “It is not so much what they said but what they did not say – what they left out,” he says.

Just as in Australia, the Billy Graham crusades marked a high point for Christian Scotland.

“But when the 1960s came with sexual promiscuity, with attacks on authority, the church hadn’t a clue how to deal with that. It had lost its roots.

“The ’50s saw a display of fruit, but it was like apples tied to a tree. Once the storm came, they just blew off.” During the key decade of the ’60s, the Scottish church “just got blown away.”

But having delivered this sad history, Robertson proves he is not just a Jeremiah.

“I would argue that people in Scotland, the United Kingdom and, I would say, western Europe are more open to the gospel than they have been in 25 years. But the church is less prepared to communicate it.”

He quotes Isaiah: “lengthen your cords, strengthen your stakes.” Then he explains: “I would like to see people looking out [to engage with non-Christians], while making sure their roots are deep.”

Just having good preaching will no longer get people to church. “If Billy Graham were alive, and at his peak and was to come to Scotland today, no, it would not work. He would not get a tenth of what he got in the 1950s.”

The church has been playing catch-up – following the trends, but doing it badly, he says.

The situation has changed. Christians have the wrong strategy. Society “is regressing to a Greco-Roman Pagan view of the world. The trouble is that Christians are not grasping that. We are trying to save Christendom, which is gone – it’s gone! We need to recognise it has gone.”

While Christians need to go back to God’s word and proclaim it, they need to apply it to the culture in which we live in a winsome way – for example, through music and novels. Shouting out Bible verses in the street doesn’t work any more, he says.

“We should be living as the first-century Christians did – living in community in the midst of a hostile culture so that world is turned upside down.”

The church has been playing catch-up – following the trends, but doing it badly, he says.

One area where Christians have been caught out is the topical issue of gender identity, gender fluidity and transgender.

“If you knew queer theory, which was around in the early 1970s, you would have known that this is where it would inevitably go. But instead we end up facing something we don’t know how to deal with.”

Robertson believes the church needs to reframe the narrative, just as the queer theory people did, to reclaim the words that have been taken from it.

“Equality, diversity and tolerance are the fruit of a Christian society. I would argue they are rapidly being turned into inequality and non-diversity and intolerance,” he says.

Bizarrely, Robertson sees Australia as being less secular than Scotland.