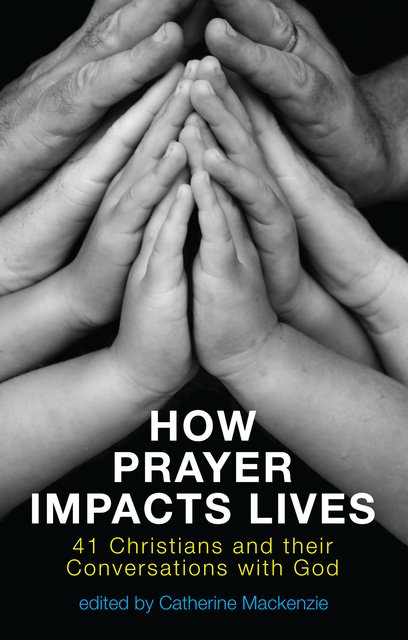 This is a chapter I wrote in the CFP book ‘How Prayer Impacts Lives” – 41 Christians and their conversations with God .

The speaker was adamant – “I don’t believe in God because I have never seen or heard of anyone who has experienced answered prayer”. He was an atheist who prided himself in his ‘evidence based’ scientific approach to life. I was next in turn to speak and basically ripped up my prepared speech to begin by simply responding – “you have now”.   As a Christian for over 35 years and a minister for over 25 you would of course expect me to believe in prayer – or rather to believe in the One who answers prayer.   Over my life I have experienced many answers, questions and responses to prayer. I have wrestled, struggled, practiced and denied prayer.   But of one thing I am certain – I am able to write this today because of answered prayer.

In October 2011 I collapsed in a pool of blood outside my church after conducting a wedding. Although spectacular it was not considered to be too serious – a couple of bleeding ulcers should have been easily dealt with by a routine endoscopy procedure. Except that from this point on nothing was routine.   Three endoscopies could not stop the bleeding and my lungs almost drowned in blood. I have little or no recollection of the several weeks I spent in the Intensive Care Unit in Ninewells Hospital, Dundee, but I have since been told that three times I came close to death. The inability to breath, e-coli of the lung, numerous infections, a hemoglobin rate of 4, and finally pneumonia all threatened to end my life. My family at one point were told that there was nothing that the hospital could do, that I was unlikely to make it through, and that it was now all up to me. Little wonder that my wife was incredulous – up to me?! I was comatosed and unable to move, communicate or do anything. Thankfully it was up to someone else.
Of course my family were praying. As were friends and the church. Apparently even in my delusional state (brought on by the drugs that had to be administered) I was asking for prayer. At one point I even wrote that people should be called to fast and pray between 3 and 4 pm one particular afternoon. I guess I figured that people could manage to fast for one hour! But people did pray – and then some.   There are three extraordinary aspects of this that stand out in my mind. Firstly on one particular Sunday the whole Free Church were asked to stop what they were doing and pray at 12 noon for my recovery. Secondly I have received many reports from people to the effect that they would be woken in the middle of the night with a strong urge to pray for me and could not go back to sleep until they did so. It seems as though God gave the burden for prayer and then answered the prayers he inspired. I am reminded of Augustine’s prayer “O Lord, command what you will, and give what you command”.

Sometimes it was difficult for my family to pray. What could they ask for? How could they express what they felt when they saw me agitated, in agony and at times in great spiritual and emotional turmoil? There were no words. Except there were. God’s words. And especially those given to us in the prayer book of the Bible – the psalms.   They were so precious, real and emotional.   We used them every day.   Psalms like Ps 91 were read or sung to me every night. In fact the whole time I was in hospital I did not go to sleep at night without a Psalm. And as a Presbyterian brought up in a tradition that prayer should be extempore and generally not written down, I was surprised at how helpful I found the prayers in the Anglican Book of Common Prayer.

And the prayers were answered. One night lying in the High Dependency Unit I knew that I was going to get better and that God still had a role for me on this earth.   Since then I have lived every day grateful for life and for the particular answer that was given to myself and so many people in answer to prayer. I say particular because of course there could have been other answers. As my son Andrew pointed out ‘if Dad dies then that too will be an answer to prayer”. And so it would have been. The atheist cited at the beginning of the passage, upon hearing this, stated that that was not fair because then God wins every way. Indeed He does.   And that is totally fair.   As a Christian I believe that God works all things together for the good of those who love him – even illness and death.   Precious in the sight of the Lord is the death of his saints. One day I will die – until then I will live on this earth thankful to God that I am living proof that prayer does indeed impact lives.

Follow up note:  Within minutes of posting this the following response was tweeted from an atheist who stalks me – of all his hate filled posts, this is the saddest.  What kind of bitter and twisted mind tweets this kind of response to such a personal story?

That story disgusts me. With all that your god does *not* achieve in response to prayer, your faith in prayer is totally obscene. Self-centred twaddle!

It is also by the way one of the most irrational responses.  We don’t believe in a God who gives us everything we want just because we ask it.  Read the story again and you will see that clearly stated.