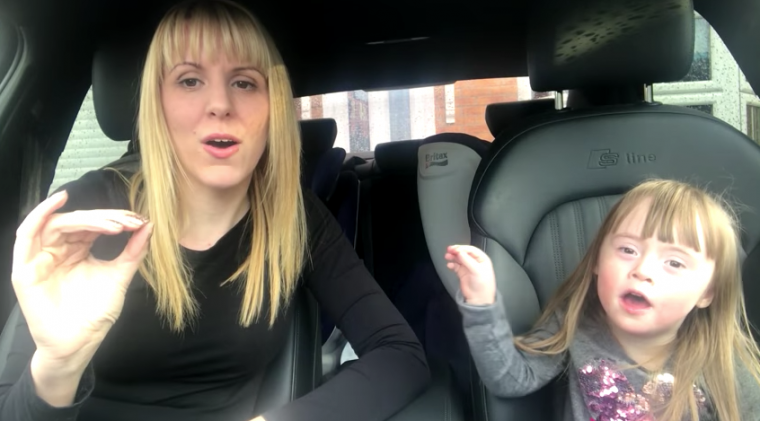 If you do nothing else this week pass on this article and the video within it.

With the negative side of humanity being so evident on the internet, sometimes it does us good to see the good that can come from the right use of this marvellous tool of communication. The video produced for World Down Syndrome Day on March 21 is a great example of that.

Entitled 50 Mums, 50 Kids, 1 Extra Chromosome, it’s gone viral – and little wonder. I consider himself to be as cynical as the next person, but I wept after watching this ‘carpool karaoke’. If someone could watch it and remain unmoved then perhaps they are more ‘handicapped’ than these children are supposed to be.  If you do nothing else this week pass on this video and indeed this article.

A couple from my own city, Dundee, have twins with Down’s syndrome who star in the video. Elaine Scougal says that her purpose was to try and challenge some of the stereotypes around Down’s. ‘A lot of people feel sorry for us – “Oh well, at least they’ll be musical and happy” and that type of thing….none of the children in the video are defined by having Down’s. They are all children first and foremost and that’s what the video gets across.’

What strikes me about it is the difference between the Christian worldview, which can see the great potential in the love that can overcome disease and illness, and the utilitarian view of our so called ‘progressive’ societies.

The Definition of Happiness

Iceland and Denmark were recently listed as two of the top 10 happiest countries in the world. But it does depend on how you define happiness. The criteria used were ‘income, healthy life expectancy, social support, freedom, trust and generosity’. Perhaps other criteria could also be used? I would put a parent’s as pretty well near the top of the list. Watching this video there may not be some of the other ‘happiness’ factors, but the love is clearly there. Maybe our experts need to rethink how they define happiness?

Sometimes our attitude towards people with physical handicaps can be both patronising and harmful. Who are we to determine that someone’s life is not worth living?

Many years ago I learned an important lesson. I was asked to volunteer with what was then known as the Scottish Spastics Council. I went down to its centre for the severely mentally and physically handicapped with the attitude that I was going to help.

One young man in particular made a big impression on me. He was in his twenties but was so severely physically handicapped that he was shriveled up into a space that was less than three feet – he could not walk and most normal physical functions were beyond him, including speech. We communicated through signs and symbols on a ‘bliss board’. It was utterly humiliating – for me! He was witty, insightful and seemed to have a spiritual appreciation that I clearly lacked. I came home shattered – at my own arrogance, folly and judgmentalism.

And it’s the judgmentalism in a society that is supposed to prize non-judgmentalism, that really gets me. How dare we judge that people cannot live a full and satisfied life because we consider them to be ‘handicapped’? I guess in the ideal world of the progressives we would have aborted Stephen Hawking if we had known about his degenerative disease?

Nowhere is this cold arrogance seen more clearly than in Richard Dawkins’ infamous tweet that it would be immoral not to abort a Downs baby. In an attempt to justify himself he kept digging a deeper hole by writing: ‘If your morality is based, as mine is, on a desire to increase the sum of happiness and reduce suffering, the decision to deliberately give birth to a Down’s baby, when you have the choice to abort it early in the pregnancy, might actually be immoral from the point of view of the child’s own welfare.’

If you want to consider the ‘sum of happiness’ then again have a look at this video – and I challenge you to say that the sum of human happiness would be improved if all these children had been ‘eradicated’.

I sometimes wonder what Jesus would think of a society which is so determined to get rid of what it perceives as the weak, the disabled and those who don’t quite fit the ‘perfect’ mould. But then I don’t need to wonder. Jesus wept – and he still does.