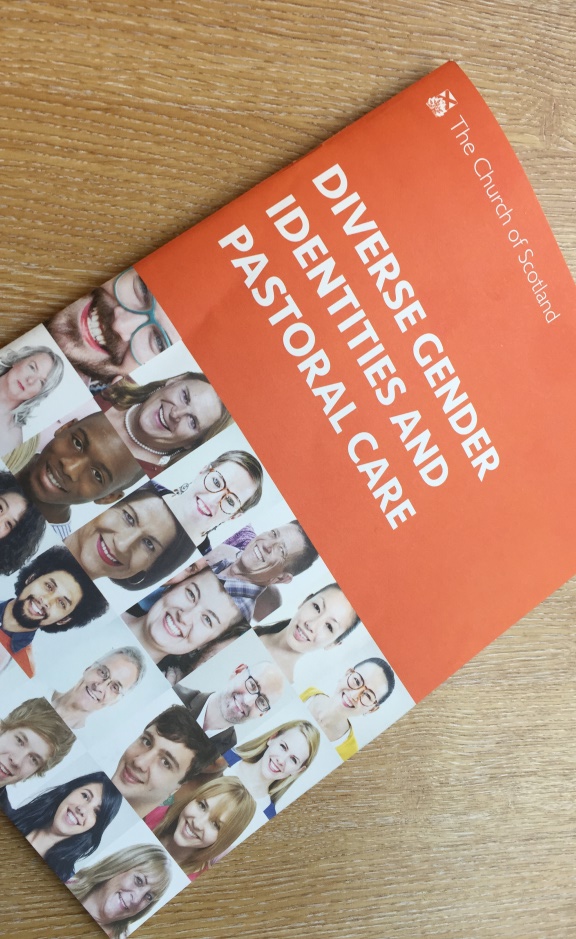 When I want to understand the culture I find that Dundee taxi drivers and hairdressers are usually pretty good barometers.  As regards the latter I was speaking to my hairdresser today and she told me about ‘gender reveal’ parties.  I had no idea what they were and at first thought they might be a kind of coming out party for transgender people.  But no – it’s an American fad where expectant mums who do not know the sex of their baby have a scan taken and then placed inside a cake which will be coloured inside either pink or blue.  They then have a party where the highlight is the cutting of the cake and the baby’s gender being revealed.

The poor fools.  Don’t they realise that they cannot tell what the baby’s gender will be?  A gender is ‘assigned’ to them at birth, and then the baby becomes a child which can decide to self-identify as another gender.

The Free Church’s response is here.

It ends with this plea:  It is for those reasons that we quite simply would plead with the Scottish government not to go down this damaging route and for the sake of all involved,
hold back from passing a law which will have damaging consequences for decades
to come.

The Church of Scotland have a very different response – they have produced a 30 page ‘pastoral advice’  booklet which they have sent to every congregation.   They describe the purpose as follows: “The Church of Scotland has produced a new resource to help congregations provide pastoral support to people who identify as being transgender and their friends and families.”

At first glance  this appears to be a compassionate and Christian approach – seeking to welcome people and offer them pastoral support.  We certainly do not want to be those who identify trans people as being any more wicked than anyone else – in that respect we are all sinners.  We may be diverse in how we sin, but we are all equal in sin!   Any trans person would as welcome in my congregation as anyone else – and we would indeed seek to bring pastoral support.

But…and this is a vital truth of the Christian Gospel – Jesus does not invite and accept ANY of us just as we are.   He came to save us.  He came to make us a new creation.  He came to give us new life.  It makes a mockery of Christ to regard him as some kind of affirming angel who wants to tell us how good we really are.  Christ did not die on the cross to keep us in our sin, he died to save us from them!

The trouble with this booklet is that it is government propaganda, promoting Queer Theory, with the blessing and backing of the State church.  It is produced in association with the Scottish Trans Alliance, a government-funded secular charity.   It presents itself as ‘an angel of light’ but is a deeply dishonest and deceitful document which any church should be ashamed to hand out.    Why do I say deceitful and dishonest?  Because it pretends to be something that it is not – in order to hide what it really is.

“As you go on through this booklet, you will not read any academic essays or
hear any debates on theological positions; you are just going to meet some
people. So get yourself a wee cuppa and settle in and hear about someone
else’s life.”

There you go….its a nice wee booklet with lots of lovely stories – grab yourself a cuppa, sit by the fire and just meet some people. This is not about academic essays (ie. we are not going to bother with evidence or reason or anything as complicated as trying to get people to think), nor is it about theological debates (how nasty they are – especially when our de fault theology is challenged).   Except this booklet is shot through with theology and pseudo-academia.  How often do you get ordinary people mentioning obscure meanings of Hebrew words?  Here are some examples of the theology in this non-theological booklet.

When I went to uni I met lots of new people, people who had more
progressive or affirming understandings of the Bible. I started reading Queer
Theology and Trans Theology which opened up new ways to think about God.
I grew up thinking about God as He – Father and Son – but I learnt that God
encompasses the genders of all people. God is beyond our understanding of
gender. I am trying to think about God in the broadest way I can. God is in
everyone and in everything and God is love so I can’t just think about God as
narrowly as I was first taught.

“Non binary is holy and God given”

“When I read the two creation stories in Genesis I see that ‘male and female created he them’. I know that these people read that as ‘male and separate to that female’ but the Hebrew is much more ambiguous than that. Perhaps it is ‘male together with female’. It might mean that the first being was androgyne. Indeed the work of Jung would suggest that we all have female and male energy in us”

“I believe that God created us all so that means he created me to be this way. It’s like what 1 Corinthians 10, verse 13 says – God won’t test you more than you can handle. He is not going to make a trans person and then condemn them to be a sinner. That’s not the act of a loving God. God loves all of us just as we are. It doesn’t matter how you present so long as you’re happy. That’s what He wants; He wants us to be happy people.”

I thought it was the soul that was important not the flesh. Isn’t it my immortal soul, my being, that the church is interested in – who I am – not this human vessel?

Now I struggle with the wording of the Lord’s Prayer because I see God as my parent not my father. The Scriptures are very patriarchal; we need to update them for the 21st century. God is genderless to me: it’s not father God it is parent God.

Queer Theology has become more accessible in recent years through many different well respected academic institutions, conferences, workshops and publications. It’s become easier for people to tap into theology that recognises values and celebrates difference. Sometimes in church we don’t realise we can look for something different – if it’s not in the lectionary then we often don’t get to hear about it. That’s what is different about the church I am in now. There is always some positive reference in church: references to Queer Theology in the sermons or prayers that mention LGBT issues.

There is loads of theology in that.   There is liberalism, feminist, Queer theology and of course gnosticism – a return to a pagan view of the human body and the created world.  Mind you perhaps I was being a bit unkind…the booklet says that there won’t be theological ‘debate’….that is true.  There is no debate because there is no alternative presented.  There is no biblical theology.  Just the theology that the State wants its faithful spiritual servants to provide.

How do we self-identify as churches?

Lets talk not about gender identity but the identity of the Church.  It seems to be that the Church of Scotland is no longer self-identifying as a biblical, prophetic Christian church.  It now self-identifies as the spiritual wing of the progressive state, affirming its every action and endorsing its liberal theology.   State churches always run the danger of avoiding the prophetic, because they are tied in with the State, and therefore will find it difficult to tell the State the Word of God.   If John the Baptist had been a Church of Scotland minister, he would have affirmed Herod in his sin, told him ‘he didn’t want to judge’ and offered to produce a booklet of stories of adulterers like him!    I hope and pray that the faithful ministers who remain in the Kirk will not hand out this propaganda, but will challenge 121 and the bureaucracy that has collaborated in this document.  Its time for faithful people to be faithful and to at least be prophets to their own denomination.

What about the Free Church (and other churches).  We can moan from the sidelines – refuse to get involved – shout in anger or shrink in despair.   Or we can be a biblical Christ loving church which does what we can to welcome and help transpeople who are seeking Christ.  They need to know him and be saved from their sin – not their trans.  And we must have a prophetic voice into the culture – whether its challenging schools when they seek to indoctrinate our children with Queer theory, or making representations to the Scottish Government.  And of course we weep and pray….

God have mercy and save Scotland from itself.

What Should the Church do About Transgender? A response to a response..